When asked if Biden supports the continued ban of Trump from social media, Psaki said the Biden White House supports “the need for social media platforms to continue to take steps to reduce hate speech.”


[b]There is no such thing as “hate speech” and the US Supreme Court has reaffirmed this many times.[/b]

All speech is protected under the 1st Amendment, but the Biden White House openly admits it is working with Big Tech to censor and ban conservatives under the guise of ‘reducing hate speech.’

Time for a free platform or a fresh Congress
+ 10

whowasthatmaskedman · 61-69, M
It is easy enough to say at this point that the Constitution and indeed the First Ammendment are flawed.. But the fact is they were simply written by better men in a better time. A Time when an individuals responsibility to the truth was implicit. A Mans word counted for something. Sadly the responsibility to speak the truth when you opened your mouth has gone, particularly in America it seems. Its a shame the founding fathers didnt foresee this development. Freedoms need to be balanced with Responsibilities. If not, you get what you have now..😷
+ 7

QuixoticSoul · 36-40, M
Lmao another conservative who has no idea how the first amendment works.
+ 6

stratosranger · M
So when it’s hate speech and death threats against Trump, perfectly fine. When social media is used to coordinate looting and burning, perfectly fine. But don’t make a joke meme about Hillary or else you going to jail!
+ 6

stratosranger · M
Death threats against a president are actually against the law. And hate speech is hate speech regardless of race or nationality. But Facebook and Twitter regularly turn a blind eye to it. [@657984,ViciDraco]
+ 1

ViciDraco · 36-40, M
[@604557,stratosranger] Hate speech is a legal term regarding protected and marginalized groups. So you are incorrect.

You can say hateful things against Democrats until you are blue in the face so long as you are not defaming, inciting, or threatening. Just as people can do to Trump or Republicans. That is not hate speech. Conservatives and liberals are not protected classes.

Death threats against anyone are actually against the law. That is why I said they should not be tolerated.
+ 0 · Reply · Feb 2, 2021

stratosranger · M
If you make derogatory comments about the color of my skin regardless as to what that color is, it’s hate speech. Sorry but that doesn’t just apply to minorities, it applies to everyone or no one, [@657984,ViciDraco]
+ 1

ViciDraco · 36-40, M
So, if you go into a grocery store and loudly and repeatedly proclaim how much this grocery store sucks, you believe you are protected from a manager having you removed? That's not how it works.

First amendment protects you from the government. Tech companies have no obligation to platform anyone's speech. As Parler had the right to censor leftists on it's platform (which it did), Amazon has the right to decide they do not want to host web services for Parler. It's up to Parler to find another host. If there are no others, then it may become time to look into antitrust action. But if there are others that also don't want to platform them, then there's nothing to be done.

The government isn't telling these companies to do this. Specific individuals in the government are applauding their actions. That's not a violation of the 1st amendment.

This same logic is going to be used to censor the left as well in the future. It usually happens that the left sees more censorship than the right. I don't mean left as in Democrats. I mean left as in actual socialists and communists. Democrats are not socialists. Not by a long shot.

But, you've already been told as much and refuse to absorb the information, so I've probably just wasted my time explaining this.
+ 4

stratosranger · M
[@657984,ViciDraco] Democrats complaining about election fraud!! It would be funny if they weren’t prosecuting people for the crap they themselves do, have done, and will keep doing. I guess this is their way of rubbing their hypocrisy in everyone’s faces.
+ 1

TheOneyouwerewarnedabout · 41-45, M
When you own all three branches of government the media the feds and the doj and big tech. you can just point and label any body you consider a threat a domestic terrorist and they’re goners
🍿
+ 5

It includes exceptions which include speech which incites lawless action. You know, like the storming of a capital building.
+ 6

beckyromero · 31-35, F
The First Amendment does [b]not[/b] give one the right to advocate the violent overthrown of the federal government.
+ 6

Hmmm? What's that, hypocrite?
What excuse will you give that cannot also be applied to the subject of your tirade?

SW User
[@360493,Pikachu] Budwick really cannot take anything that might penetrate his little bubble where America is white, Trump is dictator and all religion is banned except evangelical Christianity.😂
+ 3

stratosranger · M
Funny how Facebook was not shut down by Apple or Google even though those responsible for the Capitol protests used it to coordinate their activities.
+ 4

"If you see anybody from that Cabinet in a restaurant, in a department store, at a gasoline station, you get out and you create a crowd and you push back on them, and you tell them they're not welcome anymore, anywhere," Maxine Waters, who has called for President Donald Trump to be impeached, told supporters over the weekend.
+ 1

onestarrynight · M
[@891327,JeanAnna]
Actually he's perfectly illustrating the argument of 1st amendment proponents.
He's showing that the 1st amendment doesn't apply to private platforms such as this thread..
It's being posted by a private individual who has the right to determine what type of speech he will allow on HIS thread..
Just like Twitter, Facebook and every other PRIVATELY owned social media enterprise who, like him has the absolute right to censor all content on thier sites 👏

Thanks for so brilliantly proving our point 👉
+ 1

Hey Stars, when the government inserts itself by praising, supporting and encouraging the private enterprises that are squelching his political opponenets -

Do ya think we're getting in the weeds surrounding the 1st amendment?
+ 1

REMsleep · 41-45, F
Yes. I'm not up on all the fine details but I disagree with limiting speech. But it is not any social media platform's job to protect anything. They are companies.
+ 3

smiler2012 · 56-60, M
{@budwick ] so basically what you are saying the first amendments lets an any american citizen including the commandeering chief say what they like with with no fear. no matter how atrocious racism is wow that is liberal freedom of speech i must say. thank god joe is trying to put a halt to this practice
+ 3

graphite · 56-60, M
"Hate speech," as in whatever Democrats don't want said. George Orwell wrote "1984" as a dire warning against an overpowering government; Democrats see the book as an instruction manual, apparently.
+ 3 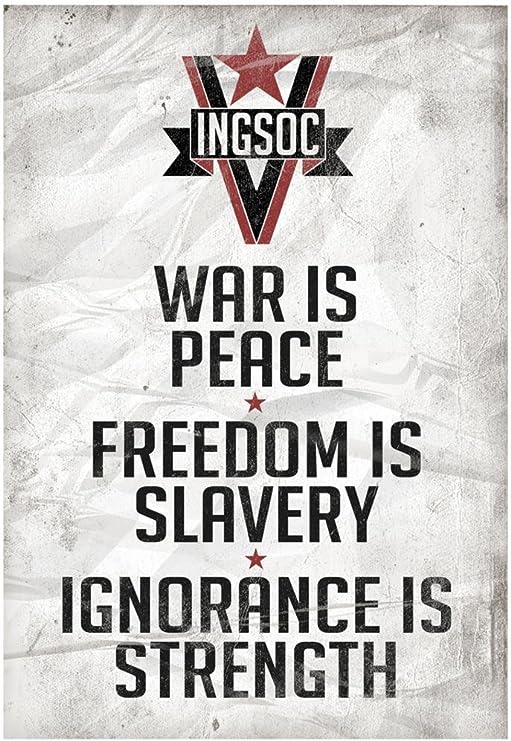 badminton · 61-69, MVIP
The intent here is to block completely bogus conspiracy theories like QAnon. Free speech does not cover deliberately false accusations and incitement to violence. BTW QAnon is just as false as the insane and ridiculous "Pizza-Gate" story that preceded it.

FYI Always cross-check information with a variety of sources. A good way to tell if a site is spreading disinformation and lies is if it tells you that all other sources are to be disbelieved.
+ 1

Budwick · 70-79, M
[@19840,MalteseFalconPunch] Wouldn't the government inserting itself into this situation, supporting faceboof and twatter - mean that the peoples 1st amendment right HAVE been violated?

PatKirby · 41-45, M
More of the same deceptive methods straight out of the Communist Playbook used to see if the new batch of suckers believe it while simultaneously eroding our rights. 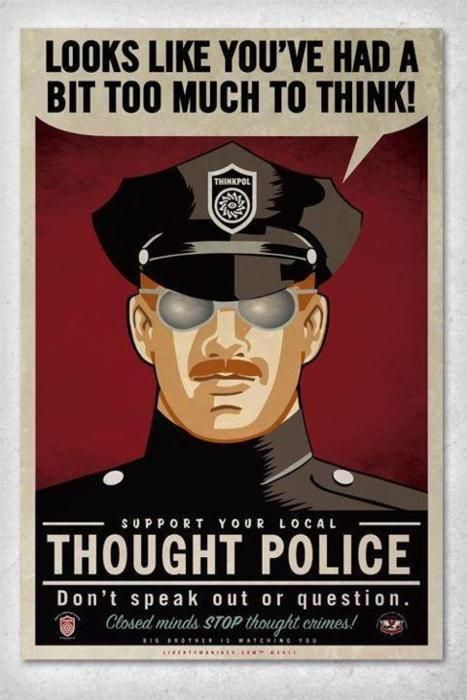 Persephonee · 22-25, F
Officially, he's saying what Republicans like to claim they believe in - the right of a business to make its own decisions about whom it serves. Twitter etc (rightly or wrongly) don't want Trump.

The poor guys makes enough blunders without ascribing to him things he's not really saying at all!
+ 2

black4white · M
i have said it before and will say it again....

Please go stand in the middle of an airport and scream... i have a bomb... that will test your freedom of speech as you can say whatever you like when ever you want...

walabby · 61-69, M
People can say what they like but have to be held accountable for what they say. That's different from preventing them from speaking in the first place!
+ 2

LeopoldBloom · M
When did the government nationalize Big Tech? You can say what you want, but no other private party is required to give you a venue. If you disagree, then you must be in favor of forcing the NFL to hire Kaepernick back.

Typical conservative hypocrite. If one of us is cancelled, it’s free enterprise at work, but when one of you is cancelled, it’s a first amendment violation. If I show up at your house, I’m sure you’ll let me spay paint “Trump sux” on your front door, because you support free speech.
+ 1

curiosi · 56-60, F
It's morphed into an all out assault. Insurance companies are now cancelling policies of conservatives. Can't get a mortgage or drive a car without it.
+ 2

soar2newhighs
Since his swearing in the administration he does not have control over has crapped on many things...but I seriously doubt he’s cognizant of it.
+ 2

Asificair · M
Truth is an absolute defense against defamation in the United States, meaning true statements cannot be defamatory 🤷‍♂️
+ 2

TheOneyouwerewarnedabout · 41-45, M
Glad we are abundant with bootlickers.

Nudistsue26 · 26-30, F
Generally, however, hate speech is any form of expression through which speakers intend to vilify, humiliate, or incite hatred against a group or a class of persons on the basis of race, religion, skin color sexual identity, gender identity, ethnicity, disability, or national origin.
+ 1

TheBatQueen · 22-25, F
I think 2020 clearly showed us how much harm and damage the so called free speech can do.

Yeah I can say what ever I want its my right but if convinced your coworkers that you raped me and got you fired and caused you your marriage and ruined your life, would you still believe free speech should be completely untouched with no restrictions what so ever?
+ 0 · Reply · Feb 2, 2021
View 2 more replies »

soar2newhighs
They are pushing and it’s going to come back to haunt them and make them rue the day..,
+ 1

MarmeeMarch · M
If I dont like FB then I will just delete my account - which I have done years ago. I believe in boycotting things that don't pander to me.
+ 0 · Reply · Feb 1, 2021
This message was deleted by the author of the main post.