Paleontologists find that some dinosaurs died in a" flood" yeah, and then they dried, so again the Bible is scientifically correct, there was a flood!

Is there any dinasaurs in the bible?
+ 3

GaiusJuliusCaesar · 41-45, M
I also heard that Noah had some velociraptors on the ark hahaha
+ 4

Elessar · 26-30, M
It's like 25 years I visit the Alps and I can assure you I've never seen any marine life fossil. How strange. Similarly, not even Sumerians who were writing down tablets when said flood should've happened according to the Bible's timeline, seemed to notice anything.

That book is as much scientifically accurate as the Lord of the Rings is. Was Tolkien born over 2000 years ago we'd be worshipping Gandalf now, probably
+ 4

I'll be straight with you. We live in these times.

[b][quote]18 For the wrath of God is revealed from heaven against all ungodliness and unrighteousness of men, who by their unrighteousness suppress the truth. 19 For what can be known about God is plain to them, because God has shown it to them. 20 For his invisible attributes, namely, his eternal power and divine nature, have been clearly perceived, ever since the creation of the world,[g] in the things that have been made. So they are without excuse. 21 For although they knew God, they did not honor him as God or give thanks to him, but they became futile in their thinking, and their foolish hearts were darkened. 22 Claiming to be wise, they became fools, 23 and exchanged the glory of the immortal God for images resembling mortal man and birds and animals and creeping things.

24 Therefore God gave them up in the lusts of their hearts to impurity, to the dishonoring of their bodies among themselves, 25 because they exchanged the truth about God for a lie and worshiped and served the creature rather than the Creator, who is blessed forever! Amen.

26 For this reason God gave them up to dishonorable passions. For their women exchanged natural relations for those that are contrary to nature; 27 and the men likewise gave up natural relations with women and were consumed with passion for one another, men committing shameless acts with men and receiving in themselves the due penalty for their error.

28 And since they did not see fit to acknowledge God, God gave them up to a debased mind to do what ought not to be done. 29 They were filled with all manner of unrighteousness, evil, covetousness, malice. They are full of envy, murder, strife, deceit, maliciousness. They are gossips, 30 slanderers, haters of God, insolent, haughty, boastful, inventors of evil, disobedient to parents, 31 foolish, faithless, heartless, ruthless. 32 Though they know God's righteous decree that those who practice such things deserve to die, they not only do them but give approval to those who practice them.Romans 1:18-31[/quote][/b]
+ 0 · Reply · May 4, 2021
Edited: 1 week ago

...she says before deliberately not answering my question...
Disappointing.
No matter. Your reluctance to answer makes that answer quite clear.
+ 2

ImperialAerosolKidFromEP · 46-50, M
I'm not about to start trusting paleontology anyway
+ 1

Carazaa · F
[@22111,ImperialAerosolKidFromEP] Me neither most conclude things they can't prove!
+ 1

Emosaur · M
Non sequitur; floods happen all the time, however there is nothing that points to the flood which killed those dinosaurs being the specific one the Bible mentions. In fact, everything points against it.
+ 2

Pikachu
I think this is a bit of a logical failure if you're seeing "paleontologists find some dinosaurs that died in a flood" and concluding "This shows the bible is scientifically accurate about a global flood".
The conclusion doesn't follow logically from the premise.

But perhaps you were just having a little joke😉
+ 2

These creationists don't bother to think through their position.
These fossil beds actually provide yet more proof that no global deluge killed off the dinosaurs.
Do you know why?
+ 1

It’s unusual for you to do so, but it’s good to see you also have a light-hearted approach to creationist piffle.
+ 1

windinhishair · 61-69, M
There are floods every year, so if the Bible says it flooded once, then it is correct. Did it also predict there would be sunshine, and storms? Right again! Amazing.

I predict that today somewhere in the world, there will be daylight, sunshine, clouds, rain, sleet, hail, snow, and thunderstorms. And lightning!
+ 3

Sharon · F
[@889684,Carazaa] [quote]Don't believe everything you read. Don't be gullible.[/quote]
I suggest you take you own advice and stop believing the rubbish you read in that collection of myths and superstitions called the bible. Start thinking for yourself for a change.
+ 1

ImperialAerosolKidFromEP · 46-50, M
[@889684,Carazaa] the right asteroid can do a great deal of damage. There are plenty of asteroids out there that could put an end to us as well. Like I said, I don't trust paleontologists either, but the idea that an asteroid extinguished a group of reptiles like the dinosaur is plausible.
+ 1

windinhishair · 61-69, M
[@889684,Carazaa] Not as much as you think. And much of the results is subject to peer review by people who have no connection to funding sources. Paleontology is less subject to those factors than other branches.
+ 1

littlepuppywantanewlife · 26-30, M
Bible was written after dinasours got extinct.
+ 1

Carazaa · F
[@1158409,littlepuppywantanewlife] Many religions are based on the Bible somewhat.
+ 1

littlepuppywantanewlife · 26-30, M
[@889684,Carazaa] I thought so. I read and saw similarities and read how people's believes were changed from Jews to Christianity to Islam. It's fascinating that this all started in middle East.
+ 0 · Reply · May 2, 2021

Sharon · F
[@889684,Carazaa] [quote]Many religions are based on the Bible somewhat.[/quote]
Many, if not most, religions pre-date christianity. The bible and christianity are just mish-mashes of bits and pieces copied from older belief systems. That's one of the reasons the bible is full of contradictions and inaccuracies.
+ 3

whowasthatmaskedman · 61-69, M
There was a Great Flood as part of the geological record around the Eastern End of the Mediteranean Sea, probably associated with the Volcanic eruption that took out the Minoan Empire. At that time much of human habitation was tied closely to the rivers for water and the coastal areas for Fishing and movement. Since this is also a likely source for the legend of Atlantis I think we can see how a massive unexplained Tsunami becomes a flood and the legend grows. Now if a piddling little Voclano can manage all that I doubt a species killing Meteor would have any trouble drowning a few with a similar Tsumani. Although it would be interesting to see any proof that Fossils actually drowned..
+ 2

whowasthatmaskedman · 61-69, M
[@889684,Carazaa] Now you know me better than to take cheap shots like that..Winning a turn of phrase is not winning the point and you know it..I can see that locating mixed groups of remains from sea dwellers and land dwellers might be considered evidence they died of the same thing at the same time. But the sea creatures could equally have been deposited on a mountain top and landed on the land dwellers. Either way thats beyond proof.
+ 2 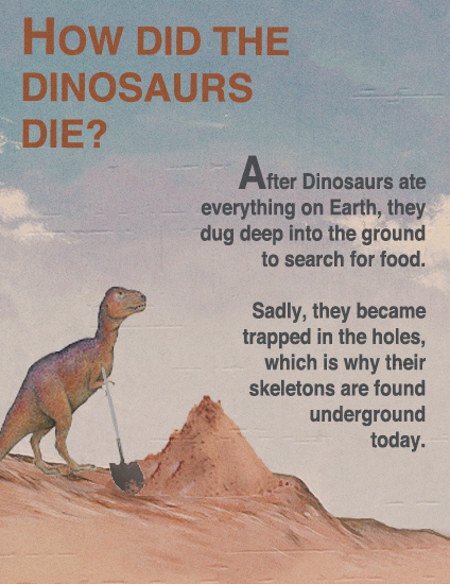 Graylight · 46-50, F
Marking the fact there was a great flood - evident as eyewitnesses or those who lived in the aftermath - is not science. Nor is there one historical flood on record. Nor is the biblical flood thought to be a world-wide event. Nor was the Bible written in the scientific age and by its nature cannot be scientifically verified for anything at all.
+ 2

Graylight · 46-50, F
[@889684,Carazaa] No one's saying it didn't. not in the way described in the Bible, though. And this is not science. This is casual observation by people who either experienced or could see direct evidence of a flood. I know the sun's closer than other celestial bodies, but that doesn't make me an astronomer.
+ 1

Carazaa · F
[@733370,Godspeed63] It even says they all were fossilized at the same time. Ofcourse they have no idea exactly when so they guess it was millions of years ago which is impossible.
https://www.newscientist.com/article/2275060-tyrannosaurs-may-have-hunted-together-in-packs-like-wolves
+ 1

Claiming something to be true doesn't make it so.

[quote]Ofcourse they have no idea exactly when so they guess it was millions of years ago which is impossible.[/quote]

Personal incredulity fallacy; "I don't understand it, therefore it's false".
+ 1

Northwest · M
As far as the Bible authors are concerned, the "world" was limited to the tiny piece of land they inhabited, primarily in the Levant.

The area experienced a number of floods, over the centuries, and some were totally devastating. Few to no Dinosaur fossils were found in the Levant.

What occurred in the rest of the world, is not known to them. We rely on science, to estimate what happened, and there have been some mega floods. Try for instance looking up how the Columbia River / valley formed.
+ 4

Carazaa · F
[@9416,Northwest] I trust that the Bible is Gods word because of the fulfilled prophesies, and knowing Jesus personally. He saved me when I was 7 years old. That's when the Holy Spirit came into my heart and I was changed, I saw how Holy God is and myself as a sinner needing redemption. "[quote]There is no other name under heaven where by we must be saved"[/quote]
+ 0 · Reply · May 4, 2021