Does this verse in Isaiah acknowledge the existence of other gods? It seems explicitly to do so. If not, why not? [Spirituality & Religion] 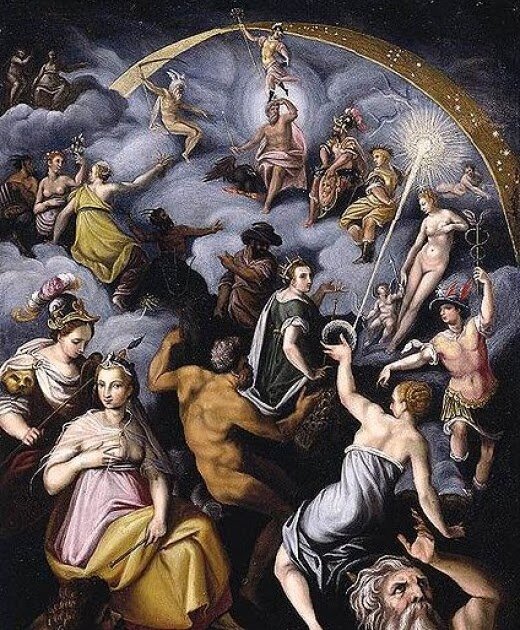 causernamebemyusername · 26-30, M
The people on here would say it's the Gods in people hearts they replace the real God with. But nope it says the ones in the heavens. Opps. Checkmate xtians.
+ 2

Yeah if we're assuming this is a history and this history book is written from a biased point of view it makes a lot more sense.
God is not omnipotent. Powerful but not omnipotent and he struggles against other powers in the heavens.
+ 0 · Reply · Feb 1, 2021

causernamebemyusername · 26-30, M
[@360493,Pikachu] And struggling is not a sign of omnipotence. Which means there is a chance to lose too.
But yes very human sounding when they thought the only way to deal with an enemy was to go to war. No diplomacy at all.
+ 0 · Reply · Feb 1, 2021

lol this sums up my experience of the bible.
+ 2

OggggO · 31-35, M
I'd have to know about the actual words being translated, but my guess would be it's about spirits posing as gods to men, which is in line with Old Testament theology.
+ 1

[quote] Isaiah didn't call them powers, he called them a host[/quote]

lol i think this is where we run into issues with competing translations.
Because we've got gods, powers, and host.

[quote] Abraham was a polytheist from a polytheistic culture, and he likely understood God more as a personal patron out of many gods than the one true divinity. It took a lot of proving and doing things considered unusual for even "gods" to accomplish to wean him off of that. [/quote]

That's really where i'm coming from. The religion that sprang up from the god of Abraham was drawing on pre-existing polytheistic religions but just setting that god at the top as the most powerful.
Because (and i could well be wrong about this) it seems to me that in a few places in the bible a clear distinction is made between false idols of wood and stone and actual other gods which exist but just aren't as good as Abraham's god.
+ 0 · Reply · Feb 1, 2021

This is where I go back to that link from earlier, the specific Hebrew word used was
[quote]צְבָ֥א (ṣə·ḇā)
Noun - common singular construct
Strong's Hebrew 6635: A mass of persons, reg, organized for, war, a campaign[/quote]

[quote]actual other gods which exist but just aren't as good as Abraham's god.[/quote]
I think that may be a limitation of the word "god" in English, in that it can refer to pretty much anything that is supernatural and either very powerful or worshipped. As far as I could tell, the Bible doesn't deny the existence of other supernatural entities, or that they could be powerful from a human perspective, but it does not refer to them as having a truly divine nature. God is, in substance and quality, of a holy and unique character that no other being or object shares. I wish I was a bit better at words so I could articulate my meaning better, but I hope I'm getting the idea across.
+ 1

[quote]This is where I go back to that link from earlier, the specific Hebrew word used was
[/quote]

I'm no hewbrew scholar so i can only wonder why if it were cut and dried there would be different interpretations of the word in context.

[quote]. I wish I was a bit better at words so I could articulate my meaning better, but I hope I'm getting the idea across.
[/quote]

OggggO · 31-35, M
I have to say, I enjoy discussing these things with you. You make me think, and you're much more respectful than many people on either side.
+ 1

Isaiah makes it clear throughout that there is only one God.

lol well now you're just confusing me. You're giving naturalistic explanations for the alleged miracles of god which seems to undermine the idea that god is god who did miracles.

[quote]The Hebrews didn't see any of those things as miracles. Often when God provides its easy to dismiss.[/quote]

I think that's flawed point of view. They had a direct line to god for a number of years. People who actually spoke to god. A direct and repeated causal relationship between what they did and what god did to them as a result.
They (ostensibly) had very good reasons to believe that god was real. Certainly more than other nations with imaginary gods would have had....unless all the gods are imaginary and everything attributed to them is just human imagination...
+ 0 · Reply · Feb 1, 2021
Edited: 5 mths ago

REMsleep · 41-45, F
[@360493,Pikachu] You are limiting God by saying that his miracles must be flashy and look like a supernatural events like on TV. Sometimes they did but....

I was never taught that way and the Bible often tells how people saw or benefited from his miracles and just a short while later doubted them.

[b] Ecclesiastes 11:5
As you do not know the path of the wind,or how the body is formed in a mother's womb
so you cannot understand the work of God,
the Maker of all things. [/b] NIV

other translations use the word mysterious. This means that we can't put our limit on how God works or provides as you did. It just happens. It might very well be a natural or mundane process such as a baby's conception, the point is that the Hebrews survived in the desert as he said they would.
My way of thinking is not anti or extra biblical, its what is taught in church.


In the miracle of Jesus walking on water he told Peter to get out of the boat and come to join him and Peter got scared halfway to him and began freaking out.
How can a guy that was a direct follower of Jesus himself and that currently was watching him perform a miracle become afraid that the miracle would fail.
This is human nature to doubt and disbelieve.
+ 0 · Reply · Feb 2, 2021

Pikachu
[@867436,REMsleep]
[quote]You are limiting God by saying that his miracles must be flashy [/quote]

I don't know that they have to be but it's kinda hard to call them miracles otherwise, imo.

[quote]the Bible often tells how people saw or benefited from his miracles and just a short while later doubted them.
[/quote]

lol yeah. I find that to be a pretty hilarious theme. Like come on guys. Not to mention that when you complain god then kills a bunch of you or sets you wandering.
Get a clue.
+ 0 · Reply · Feb 2, 2021