When your parents named you, did they use names from other family members, or did they give you something unique to you?

OceanicPopsicles · 22-25, F
I honestly don’t know. I have an Arabic name but I’m sure my parents didn’t even spoke Arabic. I mean maybe they did because they were Muslim and I’m not sure if they have Qurans that translate to Somali so probably they picked an Arabic name because of the meaning of the name they gave me.
+ 4

cherokeepatti · 61-69, F
@OceanicPopsicles In Muslim countries some of them are forced to use Arabic names. Have heard that about Morocco.
+ 2

Tobasco · 31-35, F
@cherokeepatti Morocco is an Arabic speaking country, so it makes sense if they use Arabic names.
+ 0 · Reply · 3 days ago3 d
Translate

cherokeepatti · 61-69, F
@Tobasco they don’t have a choice to name their children other names that they like though. It is forced on them. The language is called Darija, not Arabic.
+ 1

2Kai2Human · 18-21
Kai is definitely not a family name lol. It’s just a name my parents liked. My middle name was my grandfather’s name though.
+ 3

My younger brother Dad wanted to name John after him, seeing how John was a popular name on his side of the family given that he and 2 of his other brothers were also named John. So he decided Sean which is an Irish name for John...🤷‍♂️

My youngest brother was named after the John Wayne movie we had just watched Big Jake. Which was just rounded down to Jake. And Jake always loved that story, imagining himself as the Duke; he always had to climb onto his imaginary horse and canter everywhere he went. A phase he didn't grow out of till he was 13.

My eldest brother unfortunately was named after Mum's first boyfriend, Dad found that out too late and boy was not happy about it. Small wonder they couldn't keep the marriage going.
+ 0 · Reply · Jun 22, 2022
Translate

Diotrephes · 70-79, M
@Thevy29 [quote]They decided to name me after the next street they came to. Which I will not utter here, I hate the name.[/quote]

Well, it could have been worse. How about "Weiner Cutoff" after Weiner Cutoff Rd? Or, if it had been earlier in New York you could have ended up as "Adolf Hitler" if they had been in Camp Siegfried.
"The planned community German Gardens in Yaphank, New York, was built on the former site of Camp Siegfried, which was owned and operated by the pro-Nazi German-American Bund. Until 1941, several streets were named after prominent Nazis, such as Adolf Hitler Street (renamed Park Street), Goering Street (renamed Oak Street), and Goebbels Street (renamed Northside Avenue)"
https://en.wikipedia.org/wiki/List_of_streets_named_after_Adolf_Hitler
+ 1

thewindupbirdchronicles · 41-45, M
First name has no reference in family history, but so common its.... but anyway, I don't mind that part. My middle name is from a great uncle I will have never met who lived in the state that led my grandparents to giving my Mom her name. In a way it's sweet, in another way... it's annoying. It would help if I liked my middle name...
+ 1

Vin53
I'm a tribal member and my clan named their babies the first thing they encountered after their baby was born.

I didn't fare too well.

InHeaven · F
no other member had my name. My father named me whatever he liked I guess
+ 1

bijouxbroussard · F
I was named after my father’s favorite aunt, who had passed long before my birth.
+ 1

dancingtongue · 80-89, M
I don't know. I have an older cousin with the same name, but I don't know if there is any connection. Ironically, he has always been known in the family by the diminutive nickname version of the name as a younger person normally is, and I by the more formal versions of the name in order to avoid confusion. The name was never used before in the family as far back as I have done the genealogy.
+ 0 · Reply · Jun 22, 2022
Translate

CassandraSissy · 22-25, T
I named myself, sweetie! The perks of being trans!

PhoenixPhail · M
I was named after my maternal great grandfather.
+ 1

Loretta78 · 41-45, F
My parents have chosen indeed an unique name for me. This name is so unique - when you search for it in Internet you'll only find it once: Me.

DrSunnyTheSkeptic · 26-30, M
They wanted to appease my grandparents so they gave me a name starting with the same letter as my grandma's.
+ 0 · Reply · Jun 18, 2022
Translate

Diotrephes · 70-79, M
Here's a link with the most popular baby names by the year =
https://www.babycenter.com/baby-names/most-popular/most-popular-baby-names-through-history_1508595
+ 0 · Reply · 2 days ago2 d
Translate 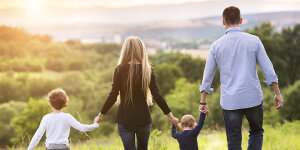