How does the Christian confront proof that the Bible is not the word of God but the word of man? [Spirituality & Religion]

How would it affect your view of the Bible as the inerrant word of god to know that one of its most beloved passages was added in later for effect? 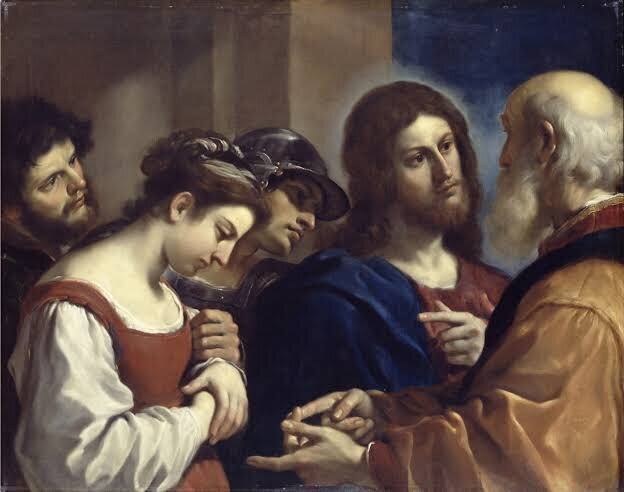 The Pericope Adulterae.
You've all heard of it even if you don't know it by that name: John 7:53—8:11, the story of the adulteress where Jesus outwits the Pharisees and challenges the man without sin to throw the first stone.

Well it's not actually part of the bible. It's a later addition and most of the early manuscripts don't have it. And this isn't even a point of significant dispute but is agreed upon by most biblical scholars.

Is it difficult to believe that the Bible is god's word when men can change it like this?

TheGlovedOne
The Christian MUST live by faith!

Lichocolati · 31-35, F
People can do whatever they want to do with the word of God, we have no control over that but they'll answer for their actions on the day of judgment. It's important to not only know the word of God but to also see him at work in your life. I experienced his work in my life earlier this evening. There's an online meeting that's supposed to last 9 days which began Friday. Last night it happened that while I was in the middle of reading the teachings on the group the network completely disappeared and I couldn't receive anything from the group till today. Same thing happened again today an hour before the service was supposed to start. I started praying asking God what was going on and why he was letting this happen and then I remembered that Jesus gave every born again Christian authority then I started telling the network to come back and guess what 2 hours later it came back. Tell me that was a coincidence.
+ 0 · Reply · Apr 25, 2021
View 13 more replies »

Sharon · F
[@1161064,Lichocolati] [quote]If you do everything you're told to do and still don't see results then it's time to hit the road. [/quote]
That's basically what I did. As a child in the UK, christianity was forced on me at school. We had to attended dily christian religious assemblies an at least pretend to pay homage to the christian god. We were also subjected to christian indoctrination, euphemistically called "religious education".

Lichocolati · 31-35, F
[@379861,Sharon] I know what it's like to have church forced on you. I went through it in my teenage years, I'm going through as we speak. The only difference between then and now is that when I finally got a chance to be out in the world on my own I saw things, I experienced things and did things that left me in isolation and only then did I become desperate for God. My family couldn't help me nobody had a solution so I turned to God and only then did he start revealing himself. He probably tried opening my eyes before that but I guess I was too busy chasing the things of this world that are only but vanity. When I came out of that dark season that had lasted more than a decade I knew God had gotten me out because in the blink of an eye I was out of that situation. I knew then that I owed him my life. It was only when I started praying with meaning and studying the word of God that got me saved.
+ 0 · Reply · May 1, 2021

Sharon · F
[@1161064,Lichocolati] [quote] My family couldn't help me nobody had a solution so I turned to God and only then did he start revealing himself[/quote]
Lonely or abused children often invent imaginary friends to comfort them. I can't see any objective difference between that and you "turning to god". Can you explain the difference to me?

[quote]when I started praying with meaning and studying the word of God that got me saved.[/quote]
That's no different from what members of other religions often say about their gods. Their testimonies are no less valid than yours.
+ 0 · Reply · May 1, 2021

TheFlippantSide · F
They do some kind of weird dance and spin and use circular logic. They use the words as "proof" that the words are true. 😑
+ 3

checkoutanytime · 41-45, M
Yes, it's a collaboration of writing by human, in order to share with the future the collective origins of all
+ 1

bugeye · 26-30, F
usual responses are just bible quotes, followed by insults and eventually block you on social media so they can return to there echo chamber of fellow Christians.
+ 2

FlowersNButterflies · 61-69, F
All the bibles are a farce. Pastafarianism is as helpful. The number of varying bibles is in itself evidence that it was not writ or inspired by a god but by man (and I do mean pecker-people as religion is not for women's benefit).
+ 1

Sharon · F
[@1125727,FlowersNButterflies] [quote]Only if you miss the irony of the made-up belief of Pastafarianism.[/quote]
But was it made up? Perhaps Our Lord Flying Spaghetti Monster just chose to reveal Itself to mankind through the medium of Its prophet, Bobby Henderson. ;)
+ 0 · Reply · Apr 25, 2021

QueenOfQuirk · F
Just from an third person perspective, you have put science on a pedestal and see it as an infallible God, which makes you blind to the first rule of religion and spirituality that it cannot be proved in a lab. It is only understood by personal experience which is why no amount of discussions or debates will help this cause
+ 1

I'm not sure where science or the possible deification of it enters into this subject...?
But yes, i do agree that personal experience will always move people more easily.
+ 1

SW User
I think this is mostly a problem for Biblical literalists, which not all Christians are, and something more common among American evangelicals than Christianity at large. The Bible can be the inspired word of God while still being written by men, compiled by men, and showing the flaws of having been written by men. Biblical literalists become obsessed with details to the exclusion of the larger messages contained within.
+ 0 · Reply · Apr 25, 2021
Edited: 7 mths ago

lol yes life is much harder when one decides to take the bible literally.
+ 1

PicturesOfABetterTomorrow · 36-40, M
Also it seems the last 12 verses of Mark were also tacked on later.
+ 1

Carazaa · F
So if that is the case does that change the fact that Jesus did not do the miracles, died for humanities sins, rose from the grave, and answers my prayers?
+ 0 · Reply · Apr 25, 2021
View 3 more replies »