Our Secretary of State confirmed yesterday what we all knew, the Afghanistan Withdrawal problems were all that idiot Trump's fault.

DunningKruger · 56-60, M Best Comment
"[Gen. Mark] Milley's fear that Trump could do something unpredictable came from experience. Right after Trump lost the election, Milley discovered the President had signed a military order to withdraw all troops from Afghanistan by January 15, 2021, before he left the White House.

"The memo had been secretly drafted by two Trump loyalists. No one on the national security team knew about it, according to the book. The memo was eventually nullified, but Milley could not forget that Trump had done an end run around his top military advisers."

Summary of story featured in "Peril" by Bob Woodward and Robert Costa.

Northwest · M
I don't think this was Trump's fault. It doesn't matter who the President is, there was no possible way the withdrawal could have gone smoothly.
+ 5

KYLakeDiver · 46-50, M
You, [@9416,Northwest] think we did the best possible job in the withdrawal. You obviously dont know the truth. Something about logistics is difficult for your liberal mind. Truth is difficult for liberals as well. Go back to school.
+ 0 · Reply · Sep 14, 2021

sunsporter1649 · 70-79, M
Is that why no American Marines were killed in the last 18 months, until biden cut and ran, leaving behind 10,000 American citizens, thousands of NATO citizens, and tens of thousands of American and NATO supporting Afghani citizens, not to mention 13 dead Marines? 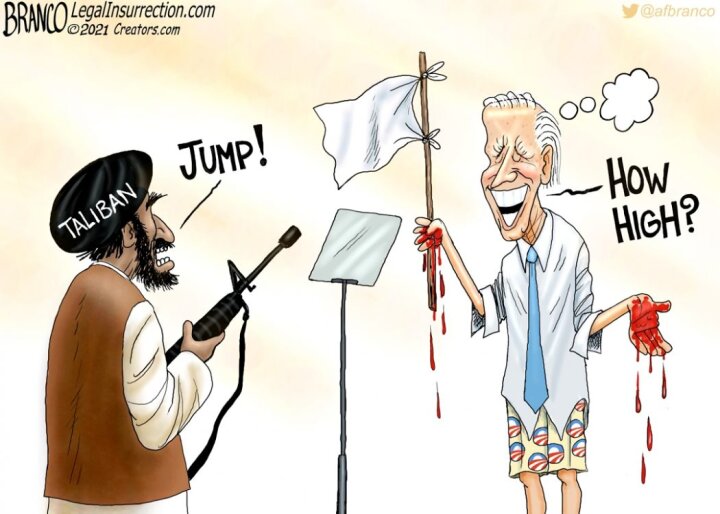 QuixoticSoul · 36-40, M
At least by signing what is essentially our surrender, Trump got the ball rolling on getting us out of there. It would have been messy no matter who was in charge.
+ 2

stratosranger · M
Trump was in office during the Afghanistan withdrawal?
+ 2

Valerian · 61-69, M
[@1067315,Driver2] They, (his Progressive Democrat Puppet Masters), are going to retire him anyway!
He gets a year, then "Oh my! Good Ole' Joe is suffering from Dementia!!!!"
Then they finally get Kamala Harris as First FEMALE PRESIDENT!
[i][b]And[/b][/i] if we're unlucky, Nancy Pelosi will become Vice President of the United States 😱!

I'm sure you think you're witty, but get with the times. Everyone streams. You are not commenting on the subject. You're simply repeating conspiracy theories.
+ 2

There's the Woman President Agenda that got Biden in the White House as a Short Term placeholder while their Agenda gets passed through the Budget & into Law.

Then Harris gets to be the Puppet. Either Kamala or her Female Vice President will run in 2024.

Jwalker
[@460373,Valerian] And yet still didn't shit his pants at the podium or wear his pants backwards, like your God. The second coming shits his pants because of long term drug abuse.
+ 1

FreeSpirit1 · 46-50, F
It was the fault of the military for not convincing the president to get everyone our first.
+ 1

PicturesOfABetterTomorrow · 36-40, M
[@580625,QuixoticSoul] If these right wingers are so convinced the military should force everyone out they should push for a bill that allows the US military to abduct US citizens from foreign lands at a whim.
+ 1

Northwest · M
[@157515,FreeSpirit1] [quote]It was the fault of the military for not convincing the president to get everyone our first.[/quote]

I'm sure you realize the State Department has been urgng everyone, since April, to get the fuck out. Nearly 130,000 people were evacuated prior to the military withdrawal.
+ 2

Northwest · M
[@580625,QuixoticSoul] [quote]It feels like no matter when we actually left, there would be some American dumbasses standing cap in hand and whining that the military didn’t wait for them in particular. Could be September, October, or 2031, someone would still be “left behind”.[/quote]

It's worse than that.

For days, we heard nothing from the likes of Ted Cruz and Dan Crenshaw about the US citizens held hostage by the Taliban at the Maxar-Al-Sharif airport, even though they had secured a flight.

The story behind the story is more interesting.

Turns out this is about one naturalized US citizen, and one Afghan with a permanent residency in the US. They both headed back to the Afghanistan to claim their families. One of them arriving on the day of the suicide bombing.

These guys are former interpreters. The Taliban had their names, supplied buy the US military, along with the names of their new spouses, to insure they're let through. But, they were not alone. They brought theirs and their new wives' extended family (parents in law, cousins, acquaintances, etc).

The Marine guards refused to let them all through, so they made their way to Mazar-Al-Sharif, and got themselves on a flight. Except that the Taliban now would not allow them to leave, because the names of their entourage were not on the State Department list.

So, thanks to pressure from the likes of Crenshaw, who were screaming foul, I believe the state department finally caved in.

Confined · 51-55, M
@Dino11 I had no idea Trump was still in office.
Biden was under No obligation to do anything. The withdraw was based solely on If Trump was reelected.
+ 1

Jwalker
He did make the deal with what was the Enemy.
+ 1

Jwalker
[@580625,QuixoticSoul] The Afghan Gov was supposed to be the ally. We spent 20 years paying for their Gov and their military and he doesn't include them. It's one thing to finally cut your losses and leave but to then blame Biden is just despicable. What was Biden supposed to do double down for another 20 years, spend trillions more on a lost cause. The lies and propaganda make me sick.
+ 1

"U.S. troops will remain in Afghanistan until all American citizens are evacuated, Biden tells ABC News"
+ 1

MotherHubbard · 56-60, F
Losing a war is never good news. You gotta spin it as a withdrawal that the US is making voluntarily.
+ 1