When to believe conspiracy theory?

It's a tough one because rich and powerful people do act to seve their own interests, often in covert ways. However, that doesn't mean that any BS read from a dodgy website happens to be true. You need concrete proof to say something definite. To see something as even credible, I think there are three questions to consider before saying it might be true:

1) Would rich and powerful people benefit? (not just the one's I don't like)
2) Does it have a credible narrative.
3) Would it be worth the risk of exposure.

For example I never believed the 9-11 truther stuff because of number 3. All three are a yes to Iraq WMD. Pizzagate fails on every count, as does Cultural Marxism.

SW User
When you're a right-wing loser. You believe in conspiracy theories because your life sucks and it's more comforting to believe that there's an evil cabal pulling the strings and making it so that you can't succeed.

Of course there are real conspiracies. Anyone who's studied history knows they occur. But most internet-fueled conspiracy theories are of the "crap" type.
+ 5

Burnley123 · 36-40, M
[@731023,KaiTheHuman] Agreed. Unfortunately, this is big though. For example, there are more people who talk about Cultural Marxism than those who have read Marxism. Hence the seismic gap between understanding and reality. Right-wing Youtube in particular (looking at you Jordan Peterson) has been very effective in de-educating a huge section of people.
+ 2

deadgerbil · 22-25
It's very strange how those who call others sheep latch onto any conspiracy and run with it blindly. Absence of critical thinking, esp when these conspiracies are divorced from basic facts.
+ 3

SW User
[@761112,deadgerbil] That's exactly what I've been trying to say (just more angrily). :P It's not "critical thinking" if you treat a conspiracy theory like an object of faith. I'm all for "question the government" but if questioning the government means you can't question conspiracy theories, how is that any better?
+ 1

CountScrofula · 41-45, M
Also is someone just rehashing the Protocols of the Elders of Zion.

If the conspiracy amounts to that a shadowy super-powered elite have executed some major fraud to the detriment of a majority group this is just old-fashioned antisemitism with the labels changed.

And again, most conspiracies are actually pretty obvious and well-known. Governments are not good at covering things up.
+ 2

CountScrofula · 41-45, M
[@1116,walabby] Yeah it was a fabrication and even plagiarized. Original author isn't known but it was almost certainly made by the Okhrana (Tsar's secret police) and just kinda spread like wildfire.
+ 1

Burnley123 · 36-40, M
[@624254,CountScrofula] Yeah, the George Soros and Rothchilds stuff is never far from all of this even when it's not directly mentioned.

A further problem is that this is an antiestablishment narrative and critique of power which is just so obviously wrong and cynical. Sorry to be pedantic but you really do need a materialist class analysis and a theory of state power. 'Bad people do bad things because they are evil' is not helpful. It also works to discredit proper critiques of power in the eyes of many people.
+ 2

Burnley123 · 36-40, M
[@580625,QuixoticSoul] Absolutely. The worst is Jordan Peterson because he gives a fake intellectual gravitas to these theories. If your understanding of Post-Modernism comes from Peterson then its 'an attempt to divide people with identity politics.'

I actually thought Post-Modernism was flaky when I studied it at university. I'm not an expert on it and have little interest in it now. Though obviously, I know enough to say that the entirety of the political right is both clueless and dishonest when they invoke it. It's like how the right use 'critical race theory' and 'cultural marxism'.

The point is that these are academic and leftist-sounding terms that you can build a conspiracy around. You take advantage of the fact that your audience will never do any reading and use them as [i]floating signifiers[/i] (irony overload) for anything you don't like.
+ 1

QuixoticSoul · 36-40, M
[@1116,walabby] Especially when it requires a cast of thousands (ala the absurd claims of a lost election). People always talk.
+ 1

PicturesOfABetterTomorrow · 36-40, M
With the 9-11 truther one that is a bit of a tough one because there was some legitimate stuff in there and some complete bullshit. Even the former head of the 9-11 commission stated they were deliberately mislead and obstructed (which makes sense because if the motives behind it came out the entire pretext for the Iraq war falls apart immediately) and there were deliberate efforts to defraud first responders out of healthcare later.
+ 1

Burnley123 · 36-40, M
[@346344,PicturesOfABetterTomorrow] That there were attempts to distance the Saudi's I have no problem believing. They are an allied country, after all. Also, the link with Al Queda was concocted. FYI, that was never used on a UK audience because even the shysters in the Blair government thought it was too much. I have already said that the WMD conspiracy passes my test.

Look man, I AGREE WITH THAT. I went on demos against that freakin war. The 9/11 truther thing is about whether the yanks blew up their own towers. Loads of people believed that at the time and tbh a load of them was on the left. Some of them still do but if it's not you then there is no need to argue.
+ 0 · Reply · May 3, 2021
Translate (BETA)

PicturesOfABetterTomorrow · 36-40, M
[@422868,Burnley123] I agree with you. Part of the issue is there was an effort to lump everyone who questioned anything from the point that the towers came down in the same camp as the "Loose Change" crowd. Much like with Ed Snowden they originally tried to paint him the same as the guy who claimed to have worked with aliens in area 51.

BlueVeins · 22-25
#1 is the basic reason why the COVID-19 bio-weapon theory fails. No one wants a bio weapon that spreads literally everywhere and murders the old & sick almost exclusively, and it hurt the PRC as bad as anyone.
+ 2

SW User
There are still lint brains who believe Pizzagate.
+ 2

checkoutanytime · 41-45, M
Those are wacky conspiracies, intresting ones like JFK, or Booth, are atleast intresting, to contemplate.
+ 1

SW User
I believe em' all 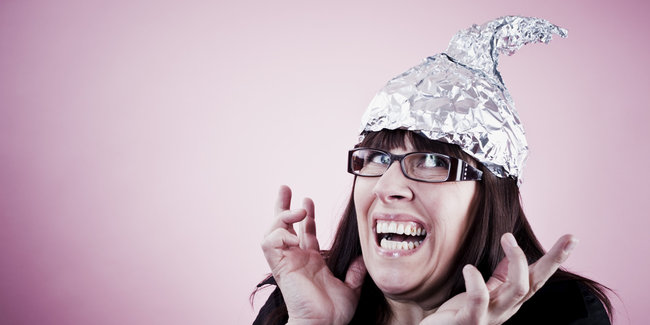 MalteseFalconPunch · 36-40
[@422868,Burnley123] Yes very much. I've noticed a big issue in discourse is people focusing on conclusions they dont like or want to be true.

1stexhub · 56-60, M
I think we probably encounter these on a daily basis on a much smaller scale through our work or organizations we belong to. People doing and saying things to disguise what their real intentions are for their own gain.
+ 0 · Reply · May 3, 2021
Translate (BETA)

BlueSkyKing · M
How about a baloney detection kit?