Ideological Fixation And The Grand Utopia

I only suggest that participants be as "open minded" as possible. I don't want to fight. A rational discussion. I picked the topic in order to discuss what I see as the challenges before humanity in solving the problems of mankind in order to discuss them rationally.

No one knows everything. We tend to fixate on our ideological preferences. This means that right or wrong on issues as mundane as fashion, music, sports, art, literature, politics, et cetera, as well as the religious, spiritual, and epistemological we seem to want everyone else to think like we think. Since it is extremely unlikely in even the most advanced state of existence we could possibly imagine, that some unified consensus be reached on our ideal cohabitation I would like to discuss:

1. What challenges are before us.
2. How we might address those challenges.
3. What conflicts might arise in doing so.
4. And how we might possibly resolve those conflicts.

1. So, imagining that all of humanity were working together to achieve, as much as possible, that ideal cohabitation, what challenges would the sociopolitical landscape be faced with? Does anyone, like myself, think that the political divisions on a global as well as national scale would be the most prominent and that differences of a theistic nature, i.e. atheist vs theist, would be comparatively trivial?

2. We might address the political challenges by completely removing national and international political representation to local clusters wherein social and legislative issues would be voted on by individuals of legal age by means of secure voting achieved by technological development. We make a device which each adult within a relatively small community could use to decide matters of local importance. The device would be, as much as possible, secure and tamper proof.

3. Possible conflicts would be, first off, democracy and the temptation to take social, political and monetary advantage by groups within the community as well as the security of the device itself. First and foremost though, would be the need to remove the incentive to corrupt the system.

4. This could be resolved by removing the incentive, which would have already been in part incorporated within the removal of the old system and building of the new. Specifically the removal of government and money. Technologically speaking we are at the point where we could develop such a system.

Having said that, what does it have to do with atheism vs theism? I believe that the spiritual and the technological must coincide with one another in the development of mankind's social structuring. I think it not only crucial but unavoidable.

I should define the terms: spiritual: I define spiritual not as the metaphysical, i.e. abstract, baseless, but from the Greek word pneuma (from which comes the English pneumatic, pneumonia) meaning unseen active force. Tradition, culture, religion, compelled mental inclination. I call it practical spirituality. We have to examine the subtle yet powerful forces that compel us.

Technology: the application of scientific knowledge for practical purposes, especially in industry.

To summarize: we use technology for advancement without monetary incentive or political corruption, we minimize the conflict by reducing communities in size to have local governance without corruption of elected officials while examining the influence of tradition, culture, ideology, et cetera.

The question: could any alleged conflict between the spiritual and the scientific be addressed and resolved without being detrimental to the global network of communities?

redredred · M
I know no more gentle way to put this. You’re out of your fucking mind.

What you describe is a hell on earth, an out of control mobocracy. No thanks. I’ll take the US Constitution as amended.
+ 3

redredred · M
@SemmelweisReflex I have you just don’t have the intelligence to see it. The US Constitution is a rare gem of the Enlightenment and no finer work exists to govern the affairs of men. The Amendments made to it have added to its quality and it was fine enough to allow for and describe the means for its amending.

Nothing in its realm comes close.
+ 1

LeopoldBloom · M
@redredred Ever stop to ask why the Constitution has allowed the development of the “uniparty” when it was designed to avoid the concentration of power into one unaccountable group? I would say that it was designed to do just that from the beginning. You’re just mad that it’s a group you disapprove of.
+ 0 · Reply · May 22, 2022
Translate

hippyjoe1955 · 61-69, M
Yeah no thanks. Utopia is the plan of fools. Humanity is a fallen creation and every attempt to make a more ideal world simply ends in failure and death as humanity destroys itself trying to bring about its imagined utopia. Throughout history you will see failed utopia after failed utopia as humans simply fail to live up to the ideals the utopia requires in order to be a utopia. If we could live in a utopia we would have attained it long ago.
+ 0 · Reply · May 19, 2022
Translate
View 11 more replies »
This message was deleted by its author.

hippyjoe1955 · 61-69, M
@SemmelweisReflex The problem with the government fanatics is they think that the solution to every problem is more government. Silly them. We need government but we need extremely limited government. We don't need it to run every aspect of every life in every city in the land. We don't need it forcing everyone to get vaxed just as an example BUT we do need it to make sure that people play fair. That contracts are honored and peace is kept. I was talking to a fellow who was trying to get a gold mine going. He had the ore and he had the finances BUT the government red tape resulted in hundreds of thousands of pages of documents discussing what he could or could not do. He was a bit bemused because he had gone through the same process 20 years ago. A few hundred pages and he was good to go. Not a big deal. He left that claim in the same condition he found it with all the wildlife and wildlife habitat in place. Now he has consumed half a forest just trying to get the papers in order.
+ 0 · Reply · May 19, 2022
Translate

gol979 · 41-45, M
Great post. Personal opinion is that technology is benign but in the hands of the crazies we have running the societal and political sphere (many hidden) tech is going to be used to further enslave us

BlueSkyKing · M
Is Diotrephes also involved in making the rules and choosing the subjects?? Or is this going to be one sided? If this is a joint effort, I don’t see any input from Diotrephes yet.
+ 0 · Reply · May 19, 2022
Translate
View 9 more replies »
This message was deleted by its author.

Diotrephes · 70-79, M
@SemmelweisReflex It's been my experience that no one has ever pissed me off by expressing his/her opinion on an issue. We all have our opinions and even when we agree our opinions may differ on certain points. When we provide sources we are just making appeals to authority since the source is usually nothing but someone's opinion. We don't usually discuss mathematics, where 1 +1 = 2 and it is a fact.

I look at the discussions as conversations between buddies that require a certain amount of give and take. We are supposed to be mature adults and not wimpy snowflakes so if people want to talk to someone who will always agree with them they should talk to a mirror and stay away from internet forums.
+ 1

SemmelweisReflex · 51-55, M
For me, Jordan Peterson's lectures at the University of Toronto on Nietzsche's proclamation that God is dead was the basis for a paradigm shift.

ninalanyon · 61-69, T
Lord of the Flies is fiction and not representative of actual behaviour. At best it is entertaining, at we worst a misunderstanding of human behaviour.
+ 0 · Reply · May 19, 2022
Translate
This message was deleted by its author. 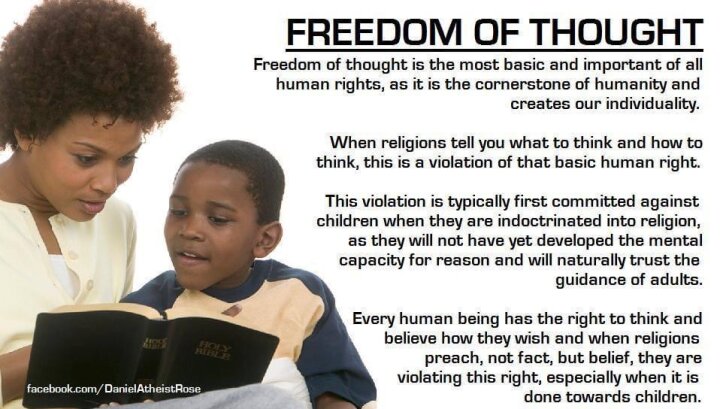 SemmelweisReflex · 51-55, M
@DocSavage [Laughs] The meme. I think it's great. It only reveals the stark naked true nature of modern day ideocracy. Xenophobia, self-righteousness, hypocrisy and ignorance. Freedom of thought, presented thusly, is double speak. It says freedom of thought while prohibiting it. It actually means freedom from thought. The insistence of a prescribed and approved of thought. The motivations behind it are transparent and idiotic. While the suggestion is that if you don't agree you should be silenced. Believe what we tell you to believe. We know best.
+ 0 · Reply · May 23, 2022
Translate
829 people following
Atheism Personal Stories, Advice, and Support