Why Do People Blame God For Everything Going Wrong?

When someone casts a spell they summon demons into this realm and after these demons do whatever they were summoned to do they don't go back where they came from. They go around looking for lives to destroy. It's the reason God warned Israel against sorcerery and divination. No offense to those who do it.

LadyGrace · 70-79 Best Comment
I think because they don't know or understand God nor His character and they fail to remember that Satan is the author of confusion and destruction.
+ 3

LadyGrace · 70-79
@PoeticPlay I don't care what credentials you have, status doesn't make you a Christian. And if you were a Christian, you would know why we need a Savior and you wouldn't have to be asking me. Further, your profile doesn't match what you say but speaks of a different lifestyle. You better clean it up. And for a pastor, that's an awfully dark Avatar. The one that says "I do very bad things."
+ 0 · Reply · Aug 6, 2022
Translate · Edited: 1 week ago

LadyGrace · 70-79
@Cloud7593 Right. But later, Paul does ask the Church of Corinth,“Do you not know that we are to judge angels? How much more, then, matters pertaining to this life”(1 Cor 6:3)? Which angels the saints are to judge is not made clear, but it could refer to judging fallen angels or demons. Paul doesn’t elaborate, but we will judge angels. That much we know. I believe they will more likely, be demons. Perhaps it will be those who have harassed us and oppressed us all of our Christian life. We just can say for sure, but for sure we can say, the saints will judge the angel’s in the coming kingdom, however, that doesn’t mean we have authority over them today.
+ 1

Elessar · 26-30, M
@walabby I thought they had imprisoned them already? You know, as soon as the guy who promised to "lock her up" took office and started fulfilling all his electoral promises 😌
+ 2

DeluxedEdition · 22-25, F
@Elessar lmfaoooo I’m so sorry I’m just aggravating you. I saw the opportunity and had to take it 🤭
+ 1

Adstar · 56-60, M
People who choose to take opffense will take offense when what they love doing is revealed as evil.. So there is no point in saying ""No offense"" Those who agree with what you say don't need it and those who are against what you say will not accept it..
+ 5

DocSavage · M
If you believe god controls everything, that it all goes according to his plan, then the bad comes from him too.
+ 3

Lichocolati · 31-35, F
@Emosaur Personal experience. I never posted much about God before I had a personal encounter with him because honestly I wasn't sure he really existed.
+ 2

Emosaur · 22-25, M
@Lichocolati Personal experience does not suffice as evidence.
+ 2

cherokeepatti · 61-69, F
Honestly believe this is the reason we have so many narcissists nowadays. They seem to be demon-possessed in what they do to others. Very destructive in many ways.
+ 3

DocSavage · M
@Lichocolati
Why not accept the fact that. They aren’t processed, and that they’re just really bad people ?
That’s what I was referring to earlier. You’re blaming demons, for what evil humans are doing.
+ 0 · Reply · Aug 9, 2022
Translate

DocSavage · M
@cherokeepatti
They allowed who ( or what in ) ? You’re still blaming imaginary demons for
Basic human greed and cruelty. God gives you free will, and when it’s used in ways he doesn’t like, you scream “the Devil made me do it !”
+ 0 · Reply · Aug 10, 2022
Translate

Remember, he is supoosed to omnipotent, omniscient, and omnipresent.....the god of all things .

Emosaur · 22-25, M
@Lichocolati If by "doesn't agree with you" you mean "doesn't agree with science and logic" then yes, your answers haven't been enough. Since you seem to be aware of that I'd like you to be honest admit that there is no evidence of your god's existence.
+ 1

Sharon · F
@OogieBoogie [quote]but supoosedly he already knows what , [/quote]
It's seems strange than an omniscient god failed to foresee the events in the Garden of Eden. Silly error like that suggests the whole story is just made up bullshit.
+ 0 · Reply · Aug 12, 2022
Translate

Emosaur · 22-25, M
An all-powerful and all-loving being would have both the means and the will to stop anything bad from happening. The fact that bad things happen all the time demonstrates your god doesn't exist.
+ 0 · Reply · Aug 5, 2022
Translate
View 21 more replies »

DffrntDrmmr · M
@Sharon [quote]Summed up as "God does not play dice with the universe." That comment was seized upon by christians as "proof" that he believed in their god.[/quote]

[i]Some[/i] Christians, I assume, but I did not know that.

He did use the word "God" on occasion, though. I suspect his concept of God is similar to mine. I concluded there is God (a number of names could substitute) by way of fact, reason and observation, including information from science, philosophy and the observation of nature, as well as study of the world's religions (including those non-Abrahamic such as Taoism and Zen).

Sharon · F
@DffrntDrmmr Stephen Hawking later disagreed with Einstein saying "God does play dice with the universe and throws them where we can't see them." That, too, was seized upon by some christians as proof that he (Stephen Hawking) believed in their god. However, when he died, there were some christians rejoicing that he was now burning in Hell because he didn't believe in their god. 🤔 There are probably more versions of christianity than there are christians.
+ 1

I wasn't as impressed with Hawking's mind as some (though he's obviously exceptional). I suspect his unique physical circumstances contributed to his fame. Of course, there were his brilliantly conceived book "A Brief History of Time," and his ideas on string theory, too, but he was no Einstein. 😋

I tend to agree with Einstein's view of it based on the perspective that One underlies all else, including randomness theorized in modern quantum theory. A most elementary foundation has just likely escaped revelation to this point.

Rhode57 · 56-60, M
People need someone to blame and a person who to alot doesnt exist or is some fantasy or religious icon is easy to blame dont take it to seriously .
+ 2

LadyGrace · 70-79
@Rhode57 [quote]People need someone to blame and a person who to alot doesnt exist or is some fantasy or religious icon is easy to blame dont take it to seriously .[/quote]

Don't take it too seriously? Jesus took it very seriously, when He died on the cross so that your and my sins could be forgiven, and you could have eternal life in heaven with Him.
+ 1 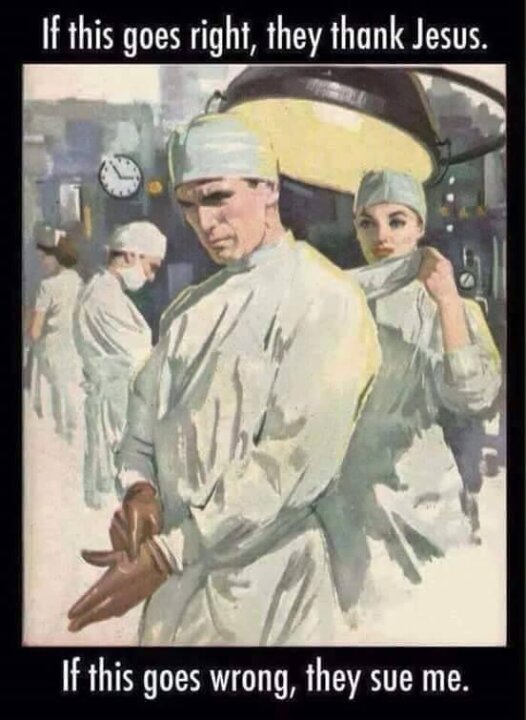 ABCDEF7 · M
People blame everything to God because they know God is not coming to defend him/herself.
+ 2

PoeticPlay · 51-55, M
Is your God GOD because you say that it is so or because God says so?

How big is your God?

How did you ignore all of that power for over 20 years?

If you tell me that your God had to wait for your permission to activate then you are more powerful than your God. 🤔

It is much more difficult to follow your God's rules with more punishments than it gives rewards for worshipping.

My demons keep me company and I give them a place to live.
It is that simple. 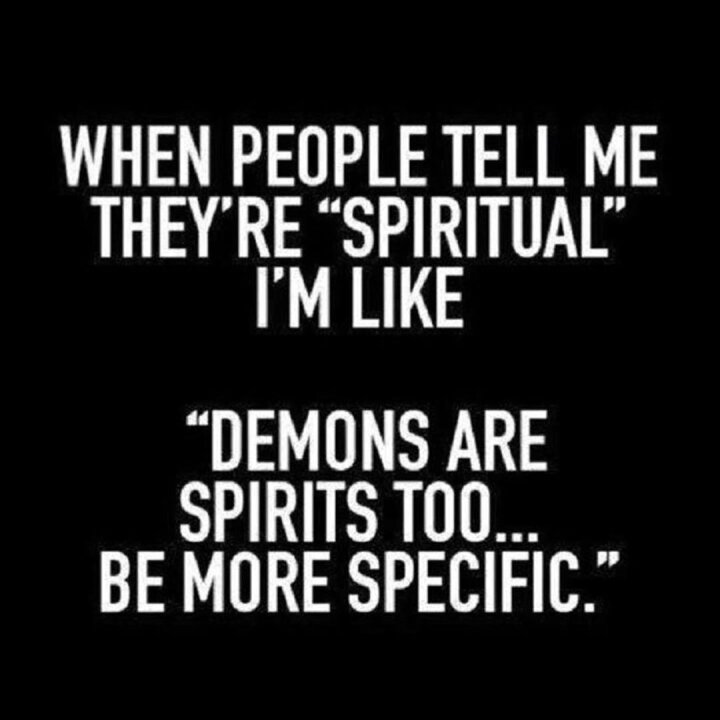 ChipmunkErnie · 70-79, M
Because he/she/it is supposedly omnipotent and therefore in charge?
+ 1

Lichocolati · 31-35, F
@ChipmunkErnie Stop projecting your beliefs on me please. Sounds like you're the superstitious one here not me.
+ 1

DocSavage · M
@Lichocolati
Why blame demons ? As you say people are responsible for their actions. Accept responsibility for yours, stop blaming imaginary demons and devils.
+ 1

DocSavage · M
@Lichocolati
You bring up summoning demons. How many people do you actually think do that in the world today ? Humans can mess up the planet more than a spirit can.
+ 1

BackyardShaman · 61-69, M
Who blamed this unit referred to as god? I see a lot of people praising, obsessed with him and the book about him
+ 1 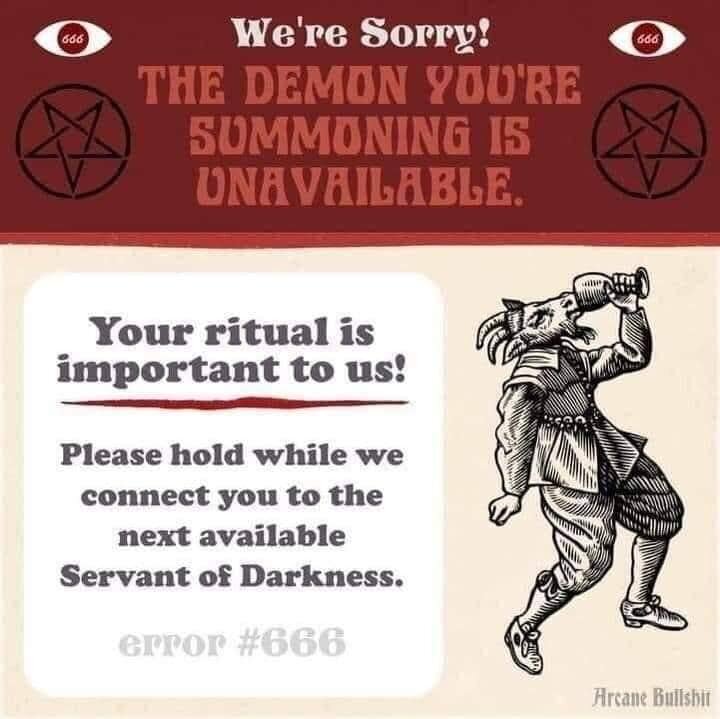 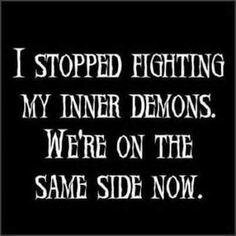 Lichocolati · 31-35, F
@PoeticPlay You make it sound easy and it's not. My life used to be controlled by these demonic voices and I was in my own jail cell all through my teenage years and 20s but God🙌🏾🙌🏾
...
+ 1