Do you think it would be possible for a human & an alien to be a romantic couple in real life?

Busybee333 · 26-30, F
It depends on how different they are and whether those differences are too tough to live with. If the alien was human-like and the differences not a problem for the relationship or health of both human and alien, why not? But if the alien is a total different specie (that is how I presume an alien would be) , perhaps it would be way too difficult, in which case, friendship would be a more plausible option.

Spoiler alert: you never know, humans might have been aliens long ago and may have forgotten..

Note: I am saying all this because I love entertaining my humor and imagination; a possibility remains a possibility until multiple evidences point it out as fact. Until then I will amuse myself to mentally explore all possibilities :)
+ 1

NCCindy · 31-35, F
It would definitely make one of the newspapers you see at the supermarket checkout stand.
+ 1

Taters · 41-45, M
not that I know of. IRL the aliens use machines to fertilize humans with their 'hybrids'
+ 1 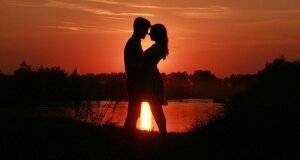