I understand many of you do not agree with my views on current affairs. That's okay, and welcomed - that's the beauty of our country. It's how we learn and grow. No one person can see the whole picture, so we need to work together. What I ask though, in the future, when you disagree with my view, instead of calling me "useless idiot", "libtard" "elite" or any other of your choice words - to instead remember I am on your side. I want our country to be strong and prosperous. Take a breath and kindly share an article. Explain with facts why you disagree with me. Help us learn together. Name calling does not make me hear your argument as sound. It only works to keep us angry, misunderstood and divided. I appreciate your thoughts and would like to know more about them, without hate.

hippyjoe1955 · 61-69, M
[@841729,SWMae] Ah yes the old liberal rhubarb about citing references. Certainly makes the liberal feel good. Not only does she not have to research she gets to criticize everyone else for doing exactly what she is doing. You start citing references to your allegations.
+ 0 · Reply · Jan 1, 2019

therighttothink50 · 56-60, M
The fact remains that Barack Obama and his minions weaponized the government against US citizens, people in the Trump campaign and Donald Trump. Watergate times a million. He did this with arrogance and hubris thinking he would never be caught. But anybody with a thinking mind sees all the evidence of wrongdoing.

This has been the most egregious scandal in US history. Nothing will change unless the evil people in government and the extreme Commie leftist globalists who hide under the guise of both parties are held accountable for their attempted destruction of this country. Nothing will change until people stand up to evil and eradicate it from society. The left in this country are consumed by pure evil, they hate this nation, they hate western civilization, they hate individual liberty and they hate Donald Trump. Mainly because Trump dares to bulldoze the status quo in washington, dares to shine light upon the corrupt, dares to expose the vile leftist media hacks who protect this disgusting swamp.

Decency starts with seeking the truth and holding the corrupt accountable. Not creating fictitious narratives and repeating them over and over.

Oh and btw, a young conservative journalist passed away a few days back, why this had to happen is open to debate. But it sure seems quite fishy to anybody who dares to think for themself.

This young writer at the federalist sadly died mysteriously after writing about the missing Strozk/Page texts. To any normal thinking human being, this appears to to be highly suspicious.

Trump needs to declassify soon or we lose our country. To all who are fully awake, please don't give up, we need to fight this evil in the DC swamp or we are all finished as human beings.
+ 2

curiosi · 56-60, F
Useful idiots
A Term invented in Soviet Russia to describe people who blindly supported the likes of Lenin and Stalin while they committed atrocity after atrocity.
+ 3 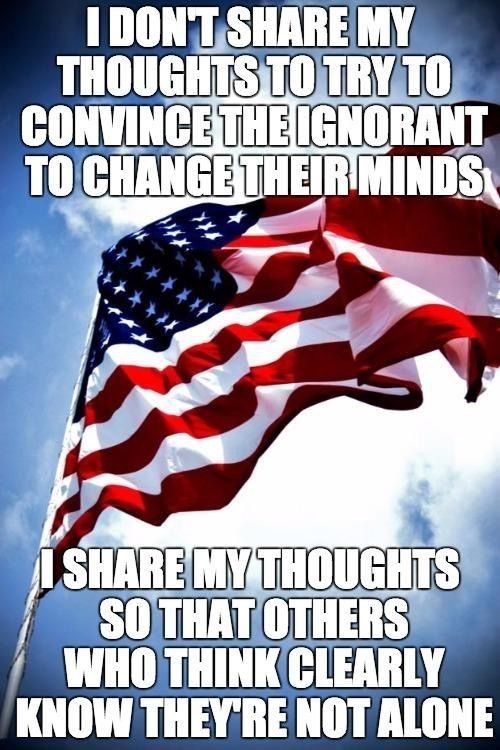 ScottBot98 · 22-25, M
Insults are not only counter productive, but are also a logical fallacy (ad hominem)
+ 1

ScottBot98 · 22-25, M
[@383281,Jackaloftheazuresand] you explain how it fits the fallacy yes, but without that fallacy already being understood, then connecting it to the fallacy is pointless. What better way to call upon the understanding of a term than to use its name? It’s like needing to use the word simile when talking about a comparison using like or as made by an author in an English class essay.

I don’t quite understand your connection. In what way is calling out a logical mistake the same as calling upon someone else who is helping a trail go on?
+ 0 · Reply · Jan 1, 2019

Jackaloftheazuresand · 26-30, M
[@10286,ScottBot98] Explaining the fallacy is understanding it and conveying it, naming it is something else. Now this is conjecture on my part I'm aware but I think people name fallacies because they are weaponizing them. You don't have to tell me I said this or that specific fallacy to explain why I'm wrong because that's what the explanation is for.

That is because the judge will say something like "strike that from the record" or "the jury is to disregard those statements." If the mod spots a fallacy in such a case as I set they would say "strawman, reformulate" or "ad hominem, retract." It is meant to keep participants in line.
+ 1

ScottBot98 · 22-25, M
[@383281,Jackaloftheazuresand] simply put, naming a fallacy and connecting what you believe falls under it is far more efficient than fully explaining a fallacy every time you run into it. When you name it you are also appealing to the fact that you are going by the pretty universal idea that logic that falls under a logical fallacy is incorrect, which can strengthen the debunking. As far as weaponizing goes, people do that with all debating tactics sadly.

Now that you gave examples, the connection is clearer. Thank you for that. I still don’t agree that a debater shouldn’t name the fallacy in question, but I see how the connection works. This is expecially the case because not all debates have moderaters (I still believe that you should name them when there is, but it’s even more so the case when there isn’t a moderater)
+ 0 · Reply · Jan 1, 2019

puck61
"A liberal utopia is a place where you can slip in a big smelly heap of reality, and get an HIV infected inconvenient truth stuck in your hand when you try to break your fall. A liberal utopia is a place where thousands of infants and children are murdered for no reason without a peep, and cities burn when the police shoot a criminal."
puck61 Feel free to quote me on that.
+ 1

puck61
[@657984,ViciDraco] It sure the hell isn't going to get better with everyone obsessing on their fifi's all the fecking time! Discipline, hard work, moral compass, common sense, respect, two genders, and TO HELL WITH TOXIC MULTICULTURALISM AND MORAL RELATIVISM!
+ 1

What is toxic multiculturalism?

I believe in moral objectiveness.
+ 1

ViciDraco · 36-40, M
Politics are business. With all of that money at stake, it is important for said businesses to try to protect and grow their market shares. To this end, they are using human tribalistic instincts in order to set up Us vs. Them mentalities. The other side isn't a difference of opinion. They are an enemy that is out to destroy the country.

Never going to get rid of this until you get both money and religion out of politics.
+ 1

LadyBug3
I agree, not sure when it became a thing to call people names because you disagree with them. Being able to have and express different opinions is what made america great to start with
+ 1

JonLosAngeles66 · M
Your eloquently written plea might as well have said “call me names”. Many of the people who responded clearly didn’t read it.
+ 1