This is just venting...so...sorry in advance.

I haven't baked anything for a long time. I received instructions from my doctor back in early February NOT to eat white sugar, white flour, white anything basically...but supplies are getting low and I thought I would make pumpkin bread with things I have on hand.

I used to be able to whip up a batch of cornbread in about 30 minutes, including the baking time!!! Of course, I have carpal tunnel and trigger finger at the same time...so that's like doing all the steps below with a sprained wrist.

I don't think I have ever had such a lengthy prep time in my entire life. No...not even the time I removed all the centers from 3 dozen cherry tomatoes with a paring knife so I could stuff them with spicy marinated shrimp.

I had just poured out most of the dry ingredients, when the phone rang. It was a member of my former church who decided to tell me every medical issue she has had for the past two months. It is not possible, with this person, to insert more than half a sentence. During all of this sitting and listening to the endless yada yada yada, my nose began to run. Severely. Probably because I was stupid and decided to open the sliding door, and it is spring, and I have very bad allergies.

I was finally able to get her off the phone, and I had to go back in there and figure out a substitute for butter...because I did not have enough.

Then I had to "make" my own eggs, using egg powder and water in the blender.

Then I had to make my own non dairy milk, using boiling water, powdered non dairy coffee creamer, and coconut milk powder, and I used the smaller of my two blender cups and it exploded all over the kitchen...hot "milk" everywhere...and it created a vacuum inside the blender cup. I thought that I would not ever be able to get the cup unscrewed. I failed so many times I thought I would cry from the wrist pain and the frustration.

The next steps...(repeat these step about 10 times)...nose is running so badly I begin to sneeze. I am sneezing so hard that I have to run in and pee...then I have to sterilize my hands, and try again.

Phone rings twice more...and the last call was so utterly ridiculous I did consider that perhaps the devil was in it. It was a call from our apartment management, who informed us that they will call us every few days to tell us some useless bit of trivia. Today's gem...what do Miss Piggy and Cookie Monster have in common? Both are voiced by the same man...Frank Oz.

ABCDEF7 · M
Why doctor advised you to not take anything white? Or did (s)he meant only for the things made artificially white by humans, like white flour/bread, white sugar, . Or she also meant to include all naturally whites? Are you okay?
+ 1

4meAndyou · F
@ABCDEF7 He was a substitute for my female primary care physician, and he had almost an entire hour free, which he spent entirely on me! That almost never happens! He was Indian, too...so he wanted no white processed flour, no sugar, no salt, no white pasta, etc. etc. He just handed me a sheet with the barest outlines of the Mediterranean diet. VERY small amounts of meat, fish like wild caught salmon twice a week, NO butter, LOTS of vegetables, no fried foods and no soda. That's something usually prescribed for people who are prediabetic. He didn't actually SAY that...but I really do feel better now.
+ 1

HannibalAteMeOut
*searches for mildly adult content* Oh, it must be the "sterilized" word 😂
+ 1

HannibalAteMeOut
@4meAndyou too many kinky words to handle 😂
+ 1

4meAndyou · F
@SmartKat I know...but it's done now. They are cooling on my rack. If I had used the half a brain I have left, I would have shut the sliding door, and I will ALWAYS remember to use the large blender cup after cleaning up [i]that[/i] mess of hot milk.
+ 1 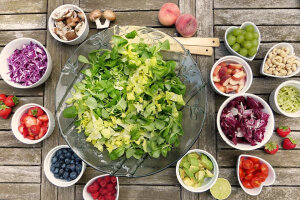