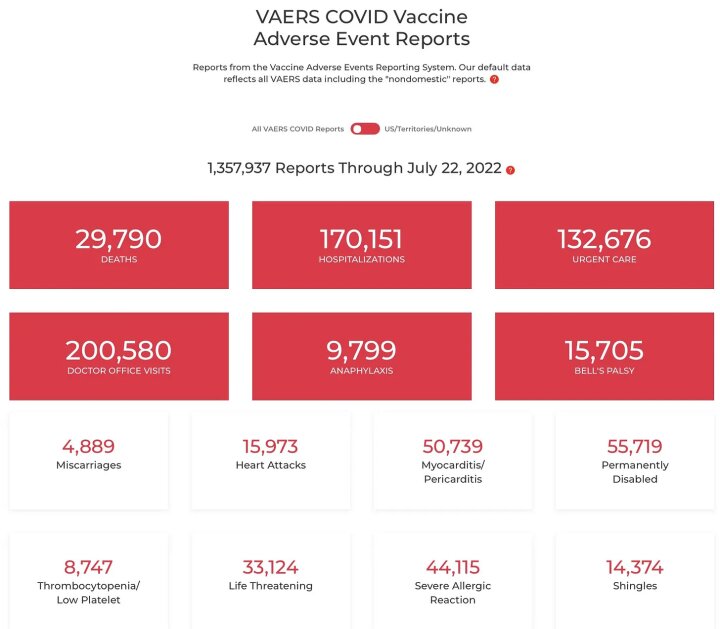 TheOneyouwerewarnedabout · 41-45, M
If you and I put a product on store shelves and it hurt/killed 1x person.
The product would be pulled and you and I would be spending our days in court…

StevetheSleeve · 31-35, M
Everyone knows VAERS data is useless. This self-reporting data is unchecked and unverified. You, for example, could have entered your delusions about the vaccine.
+ 1

hippyjoe1955 · 61-69, M
@Pherick The VAERS I am aware of is not self reporting. Maybe if you did more than a few seconds research you would learn something. It is not what you seem to think it is. Every report is screened before it is tabulated and put onto its count. What you describe is utter nonsense. The numbers the Dr used are confirmed by the VAERS system not simply 'reported' by a disgruntled user. Do try to learn for once in your life. The vax is not only unnecessary it is also dangerous. Covid is nto that dangerous and it is treatable. Present numbers all over the world show that the vax has weakened the immune system making the vaxed more vulnerable to all kinds of illnesses including covid. But you carry in your blind trust in all things Fauci and Birx. Oh right Birx now says that the vax is useless. Sorry you carry on with Fauci who was the guy who funded the forming of the covid virus.
+ 0 · Reply · 1 day ago1 d
Translate

Pherick · 41-45, M
This is all self reported data. Meaning its possible none of these reported issues have been verified by any kind of medical profession.

[quote]The Vaccine Adverse Event Reporting System (VAERS) is a passive reporting system, meaning it relies on individuals to send in reports of their experiences. Anyone can submit a report to VAERS, including parents and patients. [/quote]
+ 1

Pherick · 41-45, M
@hippyjoe1955 [quote]1: a preparation that is administered (as by injection) to stimulate the body's immune response against a specific infectious agent or disease[/quote]

Not hard man. The vaccine has been shown to lessen the severity of COVID's symptoms. In some people providing full immunity.

This is pretty basic stuff. I know you will just say i am idiot for belieiving this stuff, thats your MO, you do you man. We all know you are full of BS. You take care.
+ 0 · Reply · 1 day ago1 d
Translate

hippyjoe1955 · 61-69, M
@Pherick Point one. It is impossible to say what the vax had to do with severity of illness since there is such a wild variation among both the vaxed and unvaxed. It simply cannot be quantified. Just for example person one gets covid and becomes very ill. He can not shake the disease and the incessant coughing it causes. 6 weeks later he is feeling a bit better but he has lost about a third of his body mass in the time he was covid positive. Person two. Gets covid has a bit of a dry cough for two days and is completely recovered on day 4. Person three. Gets covid for the third time. Gets flattened by the illness for about a week then recovers with only lingering brain fog. Just can't quite get it together mentally. After a month he feels like he is finally back to normal. Person 4 gets covid and is very lethargic. A bit of a cough and a loss of taste and smell. After a week she is back to normal with no lingering symptoms. Which ones are vaxed and which ones are unvaxed?
+ 0 · Reply · 1 day ago1 d
Translate

PhoenixPhail · M
The whole thing is so sickening.
And, what's MORE sickening, is that so many people's intelligence has been hijacked by a system that's got them convinced their government is acting in their best interest, and, that they refuse to see anything [i]but[/i] that. Wilful ignorance is hard to shake. But unless people are willing to turn the other cheek, that is, take on a willingness to look in another direction, it may be too late for this civilization to recover.

I saw a video today on stopworldcontrol.com, I think, which talked about Fauchi and Moderna having the "vaccine" already in place even before the pandemic was announced. It's all part of the architecture of the scam.
+ 0 · Reply · 1 day ago1 d
Translate
This message was deleted.
View 1 more replies »

hippyjoe1955 · 61-69, M
@Nelisme If you want to remain oblivious to what is happening your can just close your eyes and pretend. I am not misleading anyone. I am simply putting up information you don't want to hear. Your problem not mine. There is no statistical information saying that the vaxes ever works as promised. Look at Biden. 4 doses of the vax and he still has it. He can't seem to shake it even as they give him antivirals. Hmmm.
+ 1

hippyjoe1955 · 61-69, M
@Nelisme I think you should close your eyes a little tighter. There is still a bit of daylight getting through.
+ 1