The Yin nature of the Rabbit encourages us to move from our hearts and to stay open to the flow of the Universe. 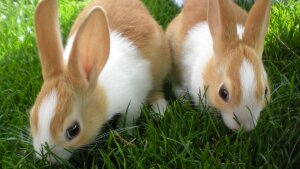