Remove Ads Get VIP
Home Groups People
Why do they use the term 'Herd Immunity'? 😔😶 We ARE humans, NOT ... | I Am Sad | Similar Worlds
I Am Sad
Follow
Upset
No Notifications
Only logged in members can view the full post, comments, images and videos.
Join Similar Worlds today »

Why do they use the term 'Herd Immunity'? 😔😶

We ARE humans, NOT animals 😶😑. Its sort of derogatory personally. They should refer to it as 'Group Immunity'. Sounds better to me anyway... Just a random rant! Normal sweetness and positivity resuming now 😊💕

DarkHeaven ·
They actually do use other names too.

“Herd immunity (also called herd effect, community immunity, or population immunity) is a form of indirect protection from infectious disease that can occur with some diseases when a sufficient percentage of a population has become immune to an infection, whether through vaccination or previous infections, thereby reducing the likelihood of infection for individuals who lack immunity. Immune individuals are unlikely to contribute to disease transmission, disrupting chains of infection, which stops or slows the spread of disease. The greater the proportion of immune individuals in a community, the smaller the probability that non-immune individuals will come into contact with an infectious individual.”

TooStuffedToMove · 36-40, M
When I heard that term. I thought our governments thinks very little of its people
+ 2

Ozymandias
We are animals 💁‍♂️
+ 2

MissFugger · F
Ive always felt exactly the same. Maybe because they see us as animals thats why we are nothing but a herd 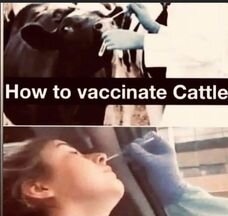 MissFugger · F
No, from the beginning “herd” sounds derogatory , like in a way belittling people[@1196191,PrincessPinkLove] But thats what we are to them nothing higher in intellect or development than a cow
+ 2

GuyWithOpinions · 26-30, M
Because they veiw us as sheep. We are just the masses to them. The means of creating wealth for them.
+ 3

BlueVeins · 18-21, M
I wish being compared to nonhuman animal populations wasn't seen as derogatory, nonhuman animals are grand and important and beautiful in their own right.
+ 1

Picklebobble2 · 56-60, M
At the beginning of this covid mess there was a theory that suggested if everyone were exposed to it that would stimulate an immunity response from everybody at the same time.

Kinda like the idea that if your child has Measles/Mumps/Chicken Pox you hold a 'party' and invite their friends in the hope everybody gets it at the same time and they all go through it together.

Or at least that was the theory.

Unfortunately there are differing effects for every 'sufferer'. They don't all get 'Mild Flu-like symptoms' as was suggested by Trump !
Some of them get it far worse and it can have life-threatening results.
+ 0 · Reply · Apr 4, 2021

Northwest · M
Because we behave socially very much like a herd.
+ 1

theUnDeforestedMind · 56-60, M
Because that's what they really think of us. That's what we are to them - human livestock.
+ 1

smiler2012 · 56-60, M
{@princesspinklove] maybe you have a valid point but what ever reference is used long as it is effective
+ 1