Home Groups People
Why are homeless people so messy? Is it really so hard to find a trash can?... | Life | Similar Worlds
Life
Follow
No Notifications
Only logged in members can reply and interact with the post.
Join Similar Worlds today »

Why are homeless people so messy? Is it really so hard to find a trash can?

I realize that people end up in bad situations, for any number of reasons, but why must there be piles of trash all around them? MOUNTAINS of trash.

4meAndyou · F Best Comment
Homeless street people are in a different category of homeless. Often, they are haters of authority, schizophrenic and paranoid. Sometimes they are former military suffering from PTSD and depression. Or they are drug users suffering from intense drug induced depression. When they are able to rouse themselves for any reason, they don't want to leave their few possessions...because they know they will be stolen, and if they have staked out a spot where no one will bother them, they also know that if they pack up their possessions to "take out the trash", their spot will be gone when they return.
+ 5

acpguy · C
[@387713,4meAndyou] I think we should be allowed to just shoot the bastards if the city officials are not willing to take care of these people ie. educate them or find a fenced in area to put them in and let them live in their own mess away from people that are willing to clean up after themselves.
+ 2

4meAndyou · F
[@20049,acpguy] I am shocked with you. Sometimes you seem as though you have good values, and at other times you go right over the edge of what is even permissible in civilized society. These people are NOT "bastards", and you should never speak so casually of shooting someone you know nothing about. You may incite a genuinely crazy person who might read this to go out and shoot a homeless vet with PTSD.
+ 2

Zackisback · 26-30, M
Because they have more important things to worry about than trash.
+ 3

enkidu
I'd expect it to be more of an indicator for them - hey, nobody care enough about this space to pick up trash, if light stuff is building up, there it's probably not too bad for wind currents, and to some degree if you can just be quiet and still with all the other debris around someone may just mistake you for some of the trash that's in the area and elect not to hassle you.
+ 1

MissFugger · F
No...don't judge that. It's mental/emotional/spiritual. It's hard to understand looking from the side
+ 4

morvoren · 26-30, F
I think when you are living a hand to mouth existence, sleeping outdoors in all weathers and ignored by society, your priorities are different.
+ 5

HopelessGuy · M
It's not easy being homeless.
+ 3

PoetryNEmotion · 56-60, F
I hope you never end up homeless. I think you lack life experience and a heart.
+ 3

acpguy · C
[@412752,PoetryNEmotion] I believe you are suffering from a bad case of stupid as it does not take much effort to clean up after one's self. I would also guess you are either a liberal or socialist.
+ 1

4meAndyou · F
[@412752,PoetryNEmotion] I have never worked with street people who refused to come in to a shelter, but I did work with families with children who were homeless, and having a big heart does not really help. Tough love helps, education, and not allowing the family to endanger their children. (I am thinking of one family living in a tent in the woods, and the only reason they EVER came in to the shelter was the mold that started growing after 3 weeks of rain, on all their clothes. Their children were almost feral, had lice, and foot fungus from three weeks in wet rubber boots with no dry socks.)

I did know one man, who no longer works at the shelter, who worked with the street people, giving them sandwiches and blankets and so on...and he was NOT stupid. I also know someone from my church who used to do that, and HE was not stupid...(just an a-hole).

BUT I would like to tell all three of you that homelessness can and does sometimes arise from mental illness and tremendous depression. It's not right to leave them out there unmedicated, but they do have the same rights as all citizens. And allowing trash to accumulate is a health hazard for them, and for the cities in which they live.
+ 1

Shpiders · 18-21
This is a homeless man where I'm from. His space is more tidy and organised than my bedroom. 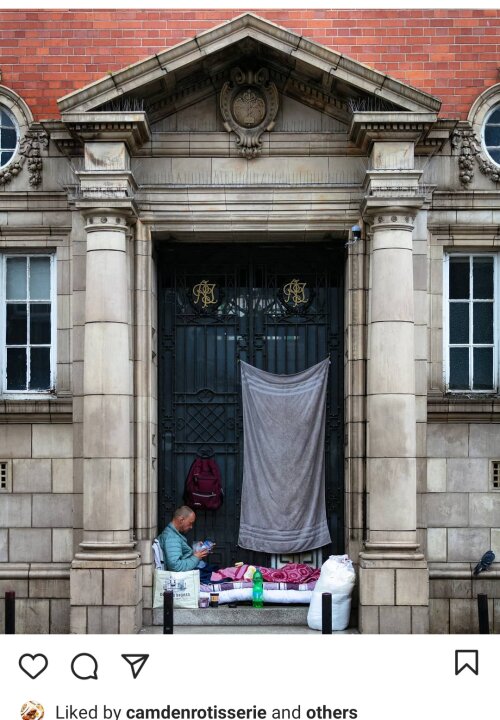 Heartlander · 70-79, M
Look at cities, counties and states that run out of money. Trash on the sides of the roadways, pavement markers barely visible, unfilled potholes ...

In some cultures neatness cost money.

acpguy · C
They are on of two things; retarded or lazy ass liberals. We have that in the neighborhood I live in just two blocks from a state college and a lot of rentals around the area. The snowflakes raised in liberal controlled schools throw their trash and cans all over the neighborhood because they are lazy and disrespectful, the cops do not get them as our city council and mayor are all liberals.
+ 1

MarmeeMarch · M
Keeping the streets neat and tidy isn't on top of their list - they need to find shelter / blankets /food - then they can go around the streets with a swiffer and air freshner to make the streets purdy.
+ 1

I recall a local urban redevelopment in an area populated by homeless with a nearby free-way overpass.

The new upscale office complex took offense to the homeless using their rest-rooms for a variety of purposes, so they locked the entrances at night.

The homeless took offense to being muscled out of their area and started defecating at the doorways of the new office development.
+ 1

MissFugger · F
[@387713,4meAndyou] yes can't say anything about Pelosi on soc.med. I once got banned from FB for three days for attempting to post a meme where she says to send stool ssamples to her office for covid testing.
+ 2

MissFugger · F
Some of them are broken...where they perceive reality differently. Many feel worthless, plus they are treated like garbage by " normal" people, deep depression where they no longer care what they look like, smell, eat ( out of garbage) too or what's around. And don't try to change anything. Hopeless.They just exist.
+ 1

Quetzalcoatlus · 41-45, M
When your homeless and possibly addicted, keeping the street clean is low on your priority list..
+ 1

littlepuppywantanewlife · 26-30, M
Not everyone is like that. Some keep moving places to places to ask for food etc. Some just end up living in dirty areas where most of people dump garbage. If places were clean then authorities won't allow them to stay there.
In some cases people who are homeless maybe have disability and also lack of hygiene.
+ 2

Heartlander · 70-79, M
To help understand public messiness and how $$ and culture affects such things, just take a look at the various supermarket parking lots. Like the Walmart parking lot Vs a Trader Joe's or an Aldi's :)

Aldi's tend to be pristine, at least locally, even in public housing neighborhoods. Walmart tends to be a leave your mess and your shopping cart anywhere you want to place, even in upscale neighborhoods.
+ 1