I Want To Know Where The Hell Women's Rights Went

In some countries women are still working to acquire all the rights of a man. Now I thought legally America was doing well at least legally in regard to women's rights what happened? Why are men who feel they "identify"as women allowed into women's spaces last few years? It's not acceptable and deprives ladies natural assumption of basic privacy, modesty, and dignity of not wanting to encounter an unwanted or unexpected male in all women's facilities. This applies to men's facilities as well who don't want to encounter females. I as a woman have a reasonable severely normal expectation that in women's facilities such as dressing rooms, changing rooms, locker rooms bathrooms I will not will encounter a man because guess what I will feel outraged and violated if I do. I go to a women's section of a spa guess what I only expect to see women's I don't want some strange man to see me disrobed. 😳😳😡😡 this isnt natural or normal stop shoving on rest of society if you have a penis you belong in men's areas period!!! I would even go as far to say you aren't helping these gender confused individuals by pandering to this nonsense and yes I would feel embarrassed if I knew a male to female transsexual saw me undressed because. Biologically that's a man! You can't magically change your sex and DNA this shit is tiring. What happened to the days you could mace an adult man for loitering around the women's areas when clearly not with a little daughter or waiting for their wives and girlfriends at sitting area of the dressing room? Women's shelters are for biological women and girls and while I agree
Men and boys need more spaces to help them and their own issues and I'll even say makes trans shelters if you have to. I will not let others dictate my conscience and push politics and insane ideologies on me. I know instinctively what is natural and right and that's not it. I agree these people need to be treated kindly and given opportunities to integrate more into society ( not by sex work and nightclubs) but not infringing on biological men's and women's rights that's it. People use common sense already and this society needs decency again or I will consider moving to a country where this epidemic doesn't get pushed on others. 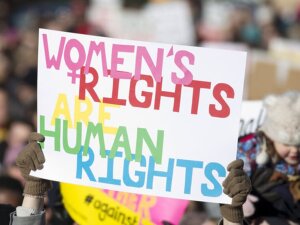