Boys playing on girls sport teams I'm not in favor of transgender boys... | I Am a Thinker | Similar Worlds
People & Family > Self
I Am a Thinker
Follow
No Notifications
Only logged in members can reply and interact with the post.
Join Similar Worlds today »

I'm not in favor of transgender boys playing on girls teams. However I do remember being in elementary school and watching the rest of the boys race past me in phys ed. If someone like that was on a girls volleyball team then it might be okay. Somewhat similar I've seen boys in flag corps in marching bands. What do you people think?

Natasha2020 · F Best Comment
As a person on HRT I can u, your muscles do change. I've got girl muscles now. I've got just got girl strength now.
And my dick, yeah good luck getting that to do anything. My tits are where the action is now anyways. I'm just your standard transgirl simp.
Honestly I avoid spaces where men and women congregate to change or go to the toilet. I'm terrified in guys spaces for obvious reasons and I don't want to scare anyone in the girls one so I avoid them too.
+ 1

boredom · 70-79, C
[@537009,MissFugger] That's not a thing that happens. Do you really think that someone will change their entire life to play on a sports team? You're falling for the lies of conservatives who want to make you feel under attack so you keep watching their content. As you say, "everything you have been told is a lie".
+ 0 · Reply · Apr 25, 2021

causernamebemyusername · 26-30, M
I think people should let people play together if they want and stop worrying about what is between someone else's legs.
+ 1 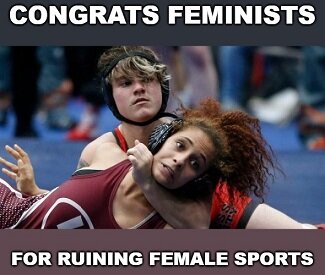