If your wife gets fat. Will you feel mad?

My husband changed after i gained weight. I am 5'3 183lbs i had a baby 2years ago and im currently aiming to be 124lbs by the begining of april. But for the past 2 years i watched my husband change on me just because of my weight. I kinda want to revenge dump him when i get fit before he leaves me. I know i shouldve stayed fit i feel bad but I was just so stressed and focussed on other things and the wrong things that I forgot about my health. Also part of me just wants to lose weight and just work things out with him. After i gained weight my husband barely comes on to me. Hes still kinda nice but he treats me like the fat friend who he cant be with. Lol its soo funny. Righy now im working out for me and juicing and i canr wait to be back to the size he met me at or a little smaller. Im losing weight for me and im slightly plotting on revenge.

katied · 31-35, F
From your post, I think the person that's unhappy with your weight gain is you. I can understand it becomes an insecurity when you no longer feel attractive as were before and you might interpret things differently such as how your husband is treating you. Perhaps you're missing the moments from when you were both single and dating, any married couplewould tell you it's never gonna be the same especially with kids, some moments maybe but not as often n carefree as before. There are new responsibilities.
If you're unhappy with yourself physically, then it's great that you're working towards making a change. But focus on an outcome of good for you n not things that would likewise be hurtful to others. The fact that you keep mentioning dumping him n revenge are proof enough you're not doing it to bring out what's beautiful about you but so that you can use it to hurt somebody else
+ 6

Icantsoishant · 36-40, M
I guess I’ll be the bad guy here and say that 60lbs is a lot of weight for someone of your height. It’s not that I’m trying to shame you but the reality is that if he liked you when you were thin then he may just genuinely not be attracted to bigger women. He being less sexually aggressive with you is not something you should take revenge on (if he spoke poorly to you or belittled you for your weight that would be different). Would it be fair to you if he “got revenge” on you for not maintaining the body that he liked and chose to marry? Sexual attraction does have an emotional element but that doesn’t change the fact that there is also a physical attraction that is required. Rather than being bitter that he doesn’t want to have sex with you while you apparently did nothing to make yourself sexually appealing to him you could appreciate the fact that he stayed loyal to you and loving toward you while he waited for you to eventually get in shape. I’ll also say that every relationship I’ve been in where someone felt it appropriate to ever “get revenge” on the other person never lasted, it’s immature and selfish.
+ 1

Salix75 · 46-50, F
[@689027,Icantsoishant] so she should be grateful he's sticking with her after she's gained weight? noooooo love doesn't work that way. She had a baby - women's bodies change (even rib girth can expand and not go back to it's original). She's admitted she was dealing with stress etc. A better man would see past the extra weight, to see the woman he loves, the mother of his child and support his partner in her wishes to lose the weight
+ 1

Icantsoishant · 36-40, M
Nothing says that he isn’t doing that. She doesn’t give any example of him changing other than not wanting to have sex. So everything I read makes me think that he is supportive of her and I’m sure he is happy for her to lose weight. The issue seems to be that she is upset that he isn’t sexually attracted to her while she has a bunch of extra weight on. My point with what I said was that everyone has a choice to be either negative and see all the ways we have been hurt by others or we can see the positive in every situation. I was just trying to give an example of thinking positive, I was not trying to imply that she owed him gratitude. I’m also very aware of how a woman’s body changes after birth (of which I’m actually a huge fan), and that has nothing to do with 60lbs.[@327737,Salix75]
+ 0 · Reply · Feb 21, 2018
Translate (BETA)

DaneSiv · 41-45, M
Never... marry for true love and you marry the soul. The body is just a vessel... don't be misguided by your senses that summate them and expresses misguided logic. Logic without wisdom is chaos... wisdom is your soul... we fall in love, honestly in love with the soul...
+ 2

exexec · 61-69, C
My wife has gained weight over the years, but she is still the same person I've loved for decades. Our sex life has not been impacted at all by her weight. Age? That's another issue altogether.
+ 2

cherryxblossom
Don’t rush the weight loss sweetie. Youd be better if losing the weight a little slower. 60 pounds in two months is not only very unhealthy, but it can really damage your skin if you lose the weight too fast. Trust me...you don’t want arm flaps or any of that loose skin hanging anywhere. Take your time with it, be healthy, and when you get to your ideal weight your skin will be grateful it had time to keep up with the change of body fat underneath.
+ 1

Brawny · 41-45, M
Maybe he barely comes onto you because that's what parents of babies act like.

The longer you're in a relationship, the less sex happens.
+ 1

Men do seem to be visually stimulated. But that may not be the only reason for reduced intimacy. 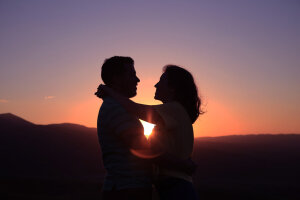