Richard Barnett (62) who affectionately calls himself "Bigo" is declared guilty on 8 counts of breaking and entering the US Capitol on 6 Janaury.

He showed what a big man he thought he was when he broke into Nancy Pelosi's office and put his feet up on her desk. As a "hero" and "patriot" to the base (and Ivanka trump), perhaps Matt Gaetz will offer him an internship in his Congressional office until he is sentenced in May 2023 where he will be looking at up to 20 years in prison.

"Bigo" claims he did not receive a fair trial because Washington, D.C. where his case was heard is not a state and there are too many Biden supporters there. His attorney explained, "We're not saying there is something inherently wrong with DC or with the jurors" (who found him guilty).

"Bigo" claimed he was "pushed" into the Capitol during the riot and was looking for a washroom while admiring all the artwork along the way. In testimony, he described himself as "hyper." Explaining the stun gun he was carrying at the time, he claimed under oath, "I didn't believe it worked any longer because it got washed in the shower." He admitted to leaving Pelosi a bloodied note, "Nancy, Bigo was here, you 'biatch.'" His attorney clarified the note was not intended to be offensive by using "biatch" instead of "bitch." 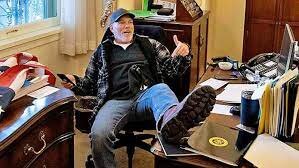 Yeah, you recall this cool guy? Goin' to jail. Looks like he's already got the jailhouse style down.

And just in case you thought he was a real tough guy patriot..after relishing and courting the spotlight of the world for his little media op, he plans to appeal because the insurrection was all over the media. Womp-WHOOMMPPP.
+ 2

Thomas52 · 70-79, M
Well, let me consider this. 🤔 Either he's a liar as big as Trump is, or the US justice system is so broken it will convict a man just for sitting in an office in a building he was forced into, writing illiterate notes to elected officials, carrying an offensive weapon and needing a washroom.

windinhishair · 61-69, M
I wonder how he described in cross-examination how he was "looking for a washroom" with his feet on Pelosi's desk? And how he was "pushed" all the way into her office from his entry point? And how either one forced him against his will into taking personal documents while he was there?

He's a liar, just as the other January 6 terrorists are.
+ 1

windinhishair · 61-69, M
@SevIsPamprinYouAlways Yes! The one that wasn't a weapon because it went through the laundry. And I neglected to mention the documents he took because he got a paper cut, so he HAD to take them to remove a biohazard from her office.