How simple would it be to end our media driven dementia using our democratically elected government?

Can you imagine a free press that's funded and not censored?-. With journalism in the public interest? Because we make that the law in America?
Are you sure you still never heard of that? -. That thing I just said? The free, public press? So democracy becomes more possible?

ElwoodBlues · M
So who decides which "presses" get funded and which ones don't? Can I get paid fulltime to write all day about my dog and my garden? Would I be allowed to use my 'free press' to threaten people with bodily harm? To organize a prison break? There are probably a lot more questions like these, but they are a start.

I'll just leave you with this PSA 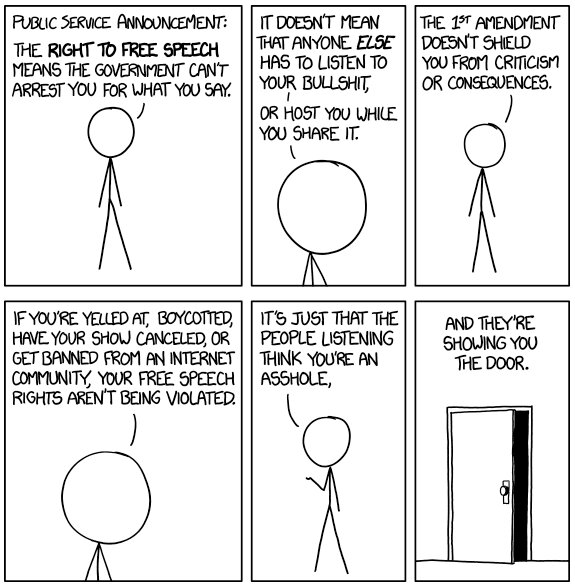 Graylight · 46-50, F
The press is just as free as it's ever been in the us. You simply cannot use hate speech, no matter how much you believe in it.

And so we end up with opinion entertainment rather than journalism. One is water cooler talk, and the other is factual information.
+ 0 · Reply · Sep 14, 2021
View 1 more replies »

All news outlets want true stories, and love to break major stories, because it gives them an edge in what they charge for advertising, status, awards, and draws MORE talent to write MORE good stories.

Go back to your Chinese overlords and tell them you failed.
+ 0 · Reply · 4 days ago4 d

SomeMichGuy · M
[@1201621,MotherHubbard] You are an apologist for China, so you are an agent or a foolish Sinophile.

I know true Chinese who are definitely my friends, and the American people would get along well with most of the Chinese people...

...but not with your government. But you either cannot read or are trying to twist away from your obvious Communist apologist positions.

You are a fool and your arguments fall apart.
+ 1

LordShadowfireTheSarcastic · 46-50, M
Why do you suppose Donald Trump was so diametrically opposed to it? He said the press was his enemy, and he was right.
+ 1

Dshhh · 41-45, M
when profit, not journalism, rules we all sufffer
when money matters more than truth, then lies will profit
+ 1

but how about.. some kind of action that declares what "news" is.
demonstrable lies should lose them that statues as "journalism"
+ 0 · Reply · Sep 14, 2021

I'm not sure how State run media would go over, but it is interesting to think about.
+ 1

SomeMichGuy · M
We have a free press, but your Chinese indoctrination did not teach you our actual Constitution.
+ 0 · Reply · Sep 17, 2021
View 2 more replies »

Your Commie overlords made sure to avoid telling you about a long tradition of investigative journalism in the public interest--the Pentagon Papers, the Watergate investigations, even one of the Watergate journalists talking to Trump and him admitting his lies about the pandemic.

Making money by HONEST reporting is possible. The [i]New York Times,[/i] [i]Washington Post,[/i] and other newspapers have done it; [i]The New Yorker[/i] and other magazines have done it; network television (CBS, NBC, ABC) have done it. And PBS on the TV side and NPR on the radio side are Federal examples of journalism in the public interest which is usually replicated at the state level.

Does China report on how it steals intellectual property? Does it report on the artificial islands it has made? Does it report on how it simply fails to control its North Korean little brother, a countrt which starves its people and is run by an idiot madman? Does it report accurately on Tianamen Square? Or how it is violating its promises regarding Hong Kong? Or how it treats Tibet? How it grabbed and probably killed an important Lama in Buddism? How about how it is destroying other ethnic minorities? Does it tell how it tries to control what its people can even access on the internet?

Does it report how Chinese peasants traded an Emperor for a vindictive oligarchy?

Does it explain how billionaires are harmonious with Communist philosophy? What does Mao's [i]Little Red Book[/i] say about that?

And yes, independent artists are still funded through patrons, through commissions of works, through requests for proposals, through grants & other funding from organizations/non-profits, through competitions & exhibitions, and through the National Endowment for the Arts.

Guess you should actually do some of your own investigative journalism before quoting the Party line, Comrade.
+ 0 · Reply · 4 days ago4 d

You are an agent of China, or s brainwashed Sinophile.
+ 0 · Reply · 4 days ago4 d
10265 people following
Politics Personal Stories, Advice, and Support