A boisterous ‘Recall Gavin Newsom’ overpass rally in San Rafael, CA was interrupted by a knife-wielding Newsom supporter Sunday afternoon, who slashed at a Recall supporter, knocking him to the ground. He attempted to cut down the 20-foot ‘Yes on Recall’ sign clipped to the pedestrian walkway on Highway 101.

The victim of the vicious assault has been identified as 59-year old Chris Carpinello, of Novato, CA. He was rushed to Marin County General Hospital, suffering from a possible concussion and other injuries, after he was slammed to the concrete road, and is in guarded condition. 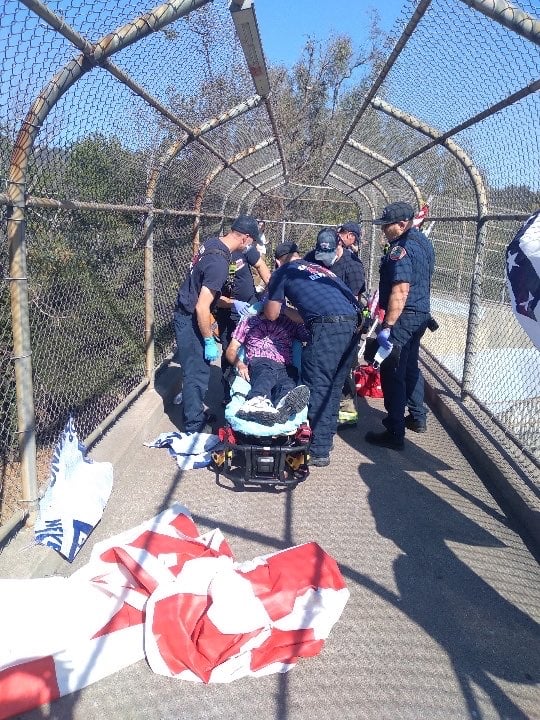 Police report that a second victim was assaulted by a pro-Newsom supporter and was rammed by a woman on a bicycle.

“This attack on our free speech rights by Newsom supporters is typical of the way Democrats in California operate. But physical attacks on us won’t stop us from Recalling Gavin Newsom. He needs to go now”, says Tief Gibbs, a local activist and organizer.

“We are praying for our friends who were senselessly attacked in broad daylight. We won’t back down,” says Gibbs.

AbbeyRhode · F
And the attacker will be back on the street within hours, while the Americans who peacefully and lawfully protested on Jan. 6th are still being tortured in prison.
+ 4

YourMomsForbiddenCrush · 51-55, M
i just think of how sad and twisted it is that someone actually committed a crime in defense of Gavin Newsome.
+ 3

MarmeeMarch · M
[@449169,YourMomsForbiddenCrush] I agree - you have to be a super loser to even do anything like that.
+ 3