Teacher Fired for Posing Naked in Support of Donald Trump 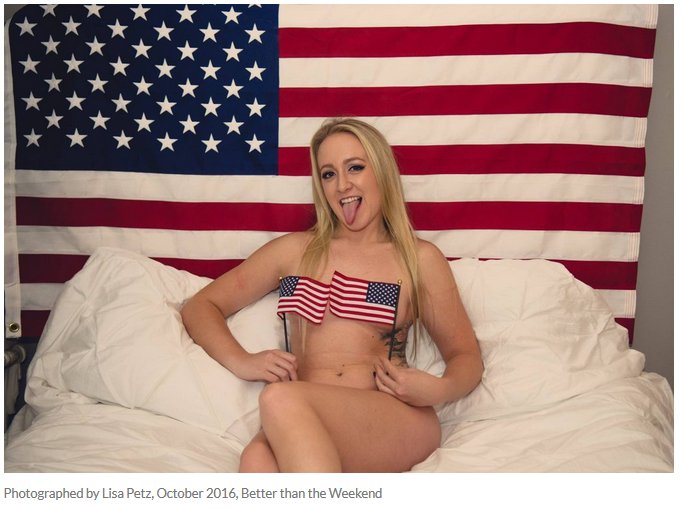 [quote]MADISON, CT — A former school teacher is suing the private Grove School in Madison after she was fired for posing semi-nude for an online site in support of Donald Trump, according to a lawsuit.

Chelsy Zelasko is a registered Democrat, but in 2016 she became a vocal supporter of then-candidate Donald Trump. She posed semi-nude with her private areas covered by American flags or guns and was interviewed by betterthantheweekend.com weeks before the election. It was posted under the title "Female Trump Supporter Gets Naked to Make America Great Again."

Zelasko is suing the school in state Superior Court. The lawsuit was filed Monday.[/quote]

nudydude · 56-60, M
odd thing if she was at a beach or pool wearing a bikini, you could see more and that is not termination reasoning.

I understand some standards, but this is a bit much.
What next are we getting in trouble for stripping naked to bath or shower?

AmbivalentFriability · 22-25
I also recall a teacher getting fired for having "revealing" pictures on her Instagram page.

I bloody hate Trump, but altogether that seems a stupid reason to fire someone. She wasn't even working for them at the time ffs!
+ 1

DunningKruger · 56-60, M
Grove School is a private institution and can take whatever action it deems appropriate to discipline employees it believes have acted inappropriately.

That being said, I'm a firm believer in the idea that what someone does on her own time with her own resources shouldn't be any of her employer's goddamn business, even if said person is a fucking idiot.
+ 0 · Reply · Oct 14, 2019

That's like saying this explains a lot about Brits: