Am I literally going crazy?

Okay, so this is going to sound weird. But I think I might be developing some rare psychiatric disorder. The thing I’ve been noticing lately, over the last week or so, maybe longer, is that my time perception is getting really weird. I’ve never had the best memory in the world, but it seems to be getting worse, at least short term memory. Things that happened just one or two days ago feel like they happened at least a week ago. For example, I just checked my calendar, and there was a dance class I attended this past Sunday. Sunday. That seems so weird…I do remember going to the class, but it feels like that was so long ago…like maybe a month? And I don’t remember any small details from it. So that’s just one small example.

But also, like I said, my memory. People will tell me things they told me recently, important things. And then I treat it like it’s new information, and then they’re understandably put off that I don’t remember. And like I said, this isn’t really new, but it’s worse than it used to be.

There are multiple possible causes. For one thing, I was born with some neurological problems like epilepsy, and I’m heavily medicated for seizures. So it could be that…but then again, I’ve dealt with this all my life. This time perception thing feels new. Or is it? How would I even know?

Also, the whole working from home thing is nice, but I think it might be screwing with my mental health. I’m naturally introverted and live alone, so I only leave the house if I have a specific thing to do that I’ve planned out ahead of time. I don’t go to the office every day anymore. So I’m cooped up in my house pretty much five days a week with little to no human interaction other than over computer chat. Blame it on COVID I guess.

So there’s the other weird thing. I don’t even know when I started working from home. On one hand, it seems like it’s only been a month or two…but that can’t be right. COVID was two years ago. And I haven’t even had this job that long. I was unemployed for the first part of COVID, right? But when I first started my current job, I was in the office for quite a while.

Katwoman · F
Get help. Don't wait for it to escalate. Hope you feel better soon 🌹
+ 2 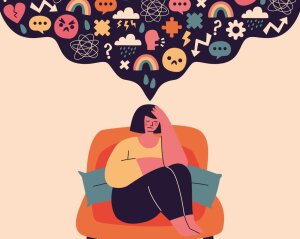