Art & Books > Writing & Literature
Love to Write
Follow
Random
No Notifications
Only logged in members can reply and interact with the post.
Join Similar Worlds today » 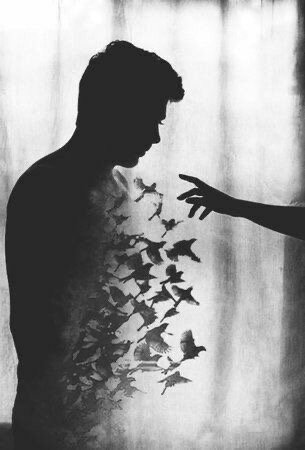 There is a certain
sort of romanticism
within every relationship

and that is....
if you were to be
on the verge of death

you’d hope
you could trust
that person to save you;

but the reality is
those relationships
are a few and far between.

So call me cruel,
but I will forever gauge
every encounter with
the presumption of...

that person would
happily watch me

fall off a cliff.

~there is only one
that could or would save me
to sacrifice himself.

Montanaman · M
I don't know if i can even put this into words that make sense, or are believable.

But given who I am, and what I believe in, I believe I'd give my life for another, without hesitation. Even someone I don't know. But definitely for someone I love.

Its just what one does if you have a heart and the an iota of humanity.
I'm reminded of a show I watched, yes, I know it's a show. Tv. But, it affected me to the point of tears.

A child was stuck in a deep well, the firefighter/paramedic was in the hole with them and couldn't get them out. The water was slowly rising, and the child was going to drown. Death was certain. The rescuer promised not to leave the child alone. To die alone. So inevitably, was going to die alongside them. And as the water reached the critical moment, as death was just seconds away, prayers were answered and the other firefighters reached the well, and the water evacuated. It was what i would have done. Anyone would have done if the moment were to actually happen.
Humanity, and the sanctity of the soul.
+ 2

HotMessExpress102 · 41-45, F
@Montanaman This right here is how we all should treat one another. Thank you for sharing this story.
+ 1

Montanaman · M
@HotMessExpress102 Always my pleasure. I'm always real with you. You're posts. Something about your posts always brings out my emotions. I don't want that to ever change.
+ 1