Why do so many people get violent when they lose a game?

like the start walking around and punching/destroying stuff lol

MarkPaul · 26-30, M
It gets too intense and those people turn something that could be fun into something that isn't. I think the fantasy becomes their reality. When I played, I used to become frustrated with people who were like that. Of course, back in the day, when we played family board games, I remember my brother getting angry whenever the game wasn't going the way he wanted and it became too much drama for me.
+ 2

MartinTheFirst · 22-25, M
@MarkPaul My sister and her husband used to fight every time we tried to play monopoly so we had to stop doing that haha
+ 1

revenant · F
Folly of the crowd. The game is just an outlet to all kind of repressed anger, idealism and what not.
One guy starts, the collective unconscious takes place and the crowd takes a life of its own, devoid of rationality.
+ 2

Thomas52 · 70-79, M
They invest a lot of themself in the outcome. Then they haven't learned self control when they don't get what they want. A dangerous combination,
+ 2 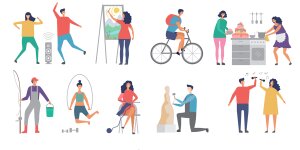