I was thinking about the Chinese paper-wrapped chicken, deciding to make it for my daughter & gang for her birthday next month.

Then I thought, "I wonder if you can do that with chicken pieces?"

Never know till you try...

I had bought chicken drumsticks today, and I made a marinade of Worcestershire sauce, cumin, oregano, paprika, soy sauce,salt, pepper and 1/2 tsp of pure sesame oil (from the Asian aisle at the market). Put the drumsticks in a qt Ziploc and poured the marinade over them, into the fridge for about an hour.

Heated oil to 400 F and fried the packets, about 13 minutes each side.

Made green beans same way but only a drizzle of sesame oil and one of balsamic vinegar. The beans only needed about 8 minutes. 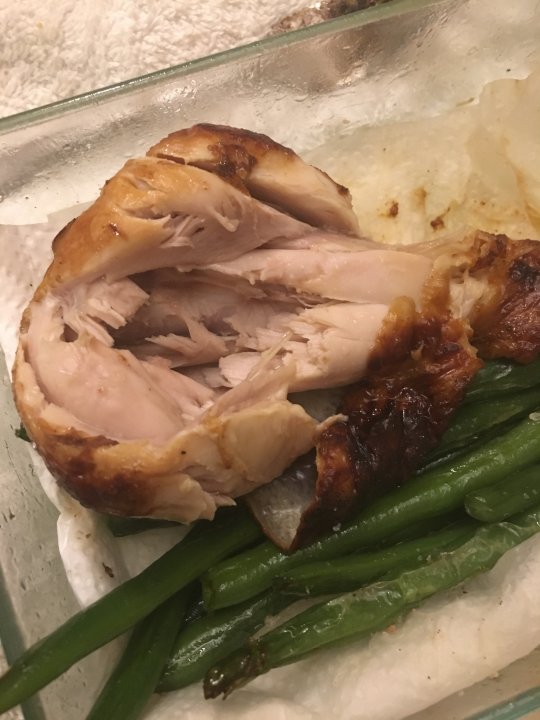 You can also do this in the oven, on the grill, or in the coals of a campfire, like hobo stew.

I can understand why oil would work so much better than water, even though the oil never touches the chicken.

Thanks for the research!

I was thinking of all those home inventors who use chicken fat and used cooking oil to fuel their automobiles, so figured it it would be just a bit warmer than diesel fuel or kerosene before responding to a spark by igniting :) Understandably, auto-igniting would be a bit higher.

We had one frying-pan fire when sizzling oil splattered and the pan went to flame when it was ignited by an adjacent burner that was cooking something else.

In the panic to extinguish it, I didn't stop to check the temperature :)

Ever since, have been hesitant to watch a pan of oil either sizzle or smoke.