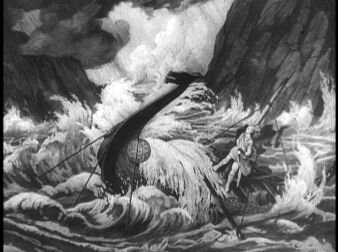 "A Scandinavian Prince, Breakan, fell in love with a Princess of the Island, whose father consented to the marriage, on condition that Breakan should show his skill and courage by anchoring his boat for three days and three nights in the whirlpool called Corryvreckan.

Breakan accepted the challenge and returned to Norway, where he had three cables made… one of hemp, one of wool and one from maidens’ hair. The women of Norway willingly cut off their hair and plaited the rope. It was believed that the purity and innocence of the maidens would give the rope strength to stand the strain.

On the last day they set the plaited cable of hair and all went well until a gale of wind broke the rope. The boat was sucked under by the currents and a surviving crewman and Breakan’s dog dragged the body of Breakan ashore – he was buried in the King’s Cave.

When the crewman finally made it home again and told of Breakan’s fate, one of the young Norwegian ladies was consumed with guilt, as she was not as pure as she had made out – it had been her hair which weakened the rope"

revenant · F
This reminds me of the Greek tale of the 3 Fates. What was it they were doing again ? wool thread ? choosing destiny and its end.
+ 1 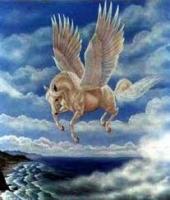