Did you know that of all foods on the planet, only WHEAT converts into a mo... | Food | Similar Worlds
Food
Follow
Asking
No Notifications
Only logged in members can reply and interact with the post.
Join Similar Worlds today »

Did you know that of all foods on the planet, only WHEAT converts into a morphine-like substance that is able to pass the blood brain barrier?

The substance to which wheat converts gloms directly onto the area of the brain that is affected by morphine and oxycodone. AND...if you take the pill or tablet version of Narcan, it blocks the "wheat morphine".

Wheat and all things containing wheat are addictive. If you eat wheat products and then quit for two weeks you will actually experience withdrawal symptoms, like headache, runny nose, depression, fatigue, etc.

All of the above can be confirmed in a scary book I've begun to read called "Wheat Belly", by Dr. William Davis, and this was recommended as reading by SW member cherokeepatti who is a naturalist and something of an expert on nutrition and food chemicals.

Penny · 41-45, F
the cultivation of wheat is also one of the key factors of the advancement of civilization. it can be one of the building blocks of a healthy body, or at least it used to be. not so much anymore sadly. i have read that book and it explains why. ancient wheat isnt bad for you like modern wheat. thats what the book explains.
+ 2

4meAndyou · F
[@533101,Penny] I am not going to make wheat bread of any kind...but I am thinking of making herbed focaccia with almond flour, and possibly the pretzels or bread sticks with chick pea flour.
+ 2

Penny · 41-45, F
[@387713,4meAndyou] good luck. here's a great pizza bomb recipe (gluten free) its fattening though but if youre dying for pizza its a tasty substitute and easy to make
https://glutenfreeeasily.com/pizza-bombs-gluten-free-pao-de-quejo-chebe-style-pizza-rolls/
+ 1

4meAndyou · F
[@533101,Penny] I am lactose intolerant, unfortunately, so pizza isn't big on my list of things I crave...but I do want some once in a blue moon. Dominoes pizza now makes a cheese free gluten free version of pizza, so I don't have to fuss.
+ 1

cherokeepatti · 61-69, F
It doesn’t take two weeks for symptoms to show up, it was the day after quitting wheat for me and it felt like I was coming down with the flu, just lasted one day but I was eating the equivalent of two slices of bread a day when I went cold turkey.
+ 1

Oster1 · M
It is true Fritos, tortillas (I like white corn), etc have no gluten but they are almost assuredly GMO and in 80 percent of all food products. I’m not sure that is all that healthy either.😊[@387713,4meAndyou]
+ 2

cherokeepatti · 61-69, F
Iceberg lettuce and wild lettuce has a type of opiate in them too.
+ 1

4meAndyou · F
[@16806,cherokeepatti] You mentioned that...but it is only in the dark green outer leaves. You also said that it is a milky looking substance that appears when you cut the leaves near the stem.
+ 1

Mouseinthehouse · 36-40, F
Is wheat belly where your belly looks pregnant like a truck drivers beer gut?
+ 1

4meAndyou · F
[@871343,Mouseinthehouse] Yes. A bit earlier in the chapter the Doctor discusses where various types of fat deposit, and the butt, thighs and upper arms all deposit excess fat from excess intake of calories. Only visceral fat, (the spare tire around the middle), comes directly from a vicious cycle of overdoing wheat calories. Wheat has the highest glycemic index, higher than sugar.
+ 1

4meAndyou · F
[@871343,Mouseinthehouse] In women, if you will look at this photo as an example, the belly tends to hang down a bit lower than in men. 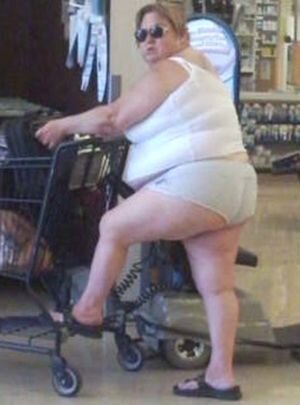 4meAndyou · F
[@1097981,JoePourMan] The Doctor who wrote the book cites several experiments which were performed by reputable scientists...(and one not so reputable experiment at the Veterans administration).

He also went into agonizing detail over the history of the genetic changes performed on wheat, and even ordered a sample, (still being produced), of ancient wheat to see what kind of bread it made and to test it for gluten. Ancient wheat doesn't rise much, because it has almost no gluten.

Every change we have made to the original wheat plant our ancestors cultivated has increased the amount of gluten in the wheat...and GMO wheats can't be tolerated by an increasing number of humans.

cherokeepatti · 61-69, F
[@387713,4meAndyou] My uncle said that in the 50s & 60s farms yielded about 30 bushels of wheat per acre...it’s been hybridized to increase yields and now farmers are getting 42-45 bushels per acre, Roundup spray is being sprayed on the wheat a few days before harvest to increase yields. It wouldn’t surprise me if the gluten-sensitivity people are having from wheat is mostly due to the chemicals being sprayed on it.
+ 3

4meAndyou · F
[@16806,cherokeepatti] I have heard that. Roundup is a killer...and not everyone can afford to buy organic all the time.

Neuroticnelly · 36-40, F
I believe this. I quit eating wheat for about a year to figure out my stomach issues. I could never smell the bread section in the grocery store. When I stopped eating it I could. It became a craving. I never had cravings for it before.
+ 2

nonsensiclesnail · 46-50, F
This makes so much sense! I wish I didn’t live bread. Bread certainly does not love me back.
+ 1

Peaches · F
I personally don't like wheat products, but I know a few friends that DO. I need to mention this to them!😯🍞Thanks for the info!
+ 2