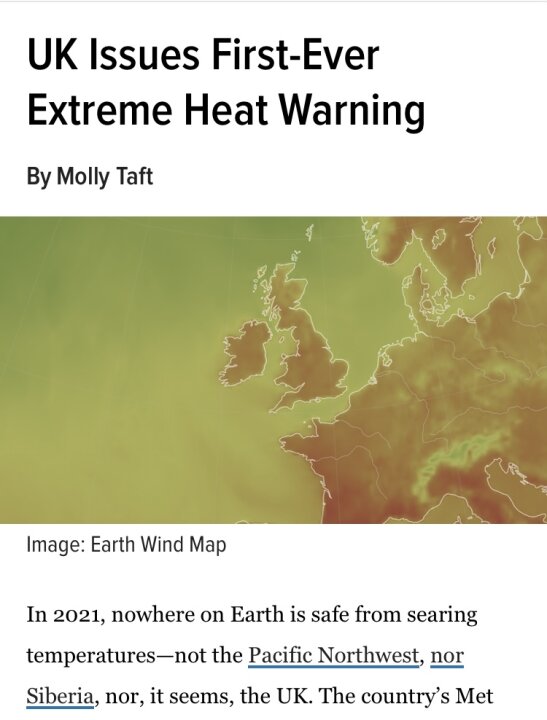 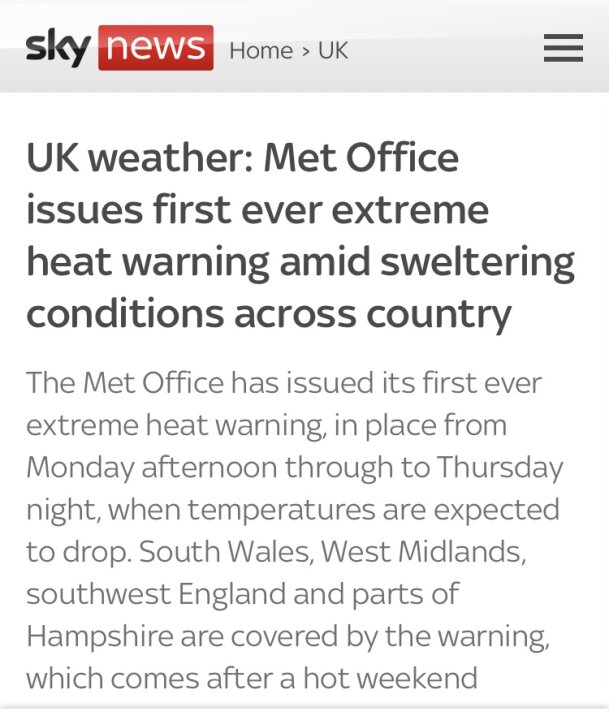 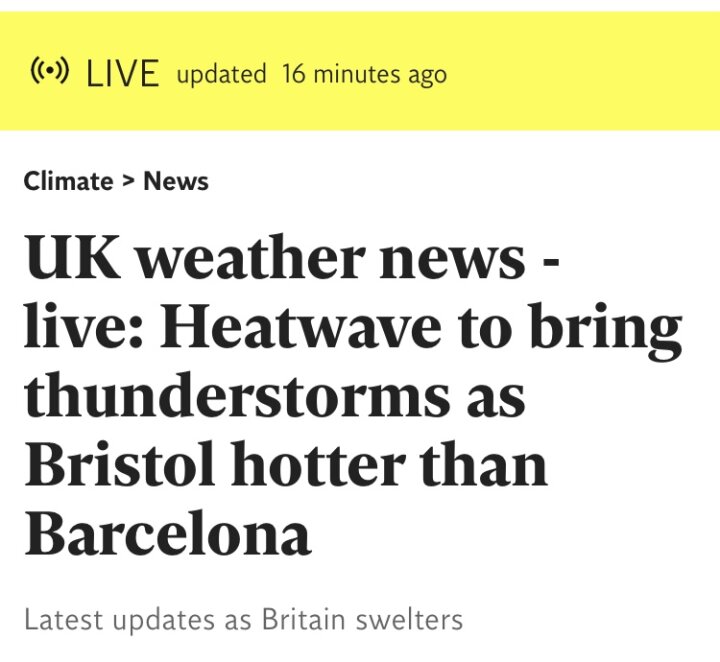 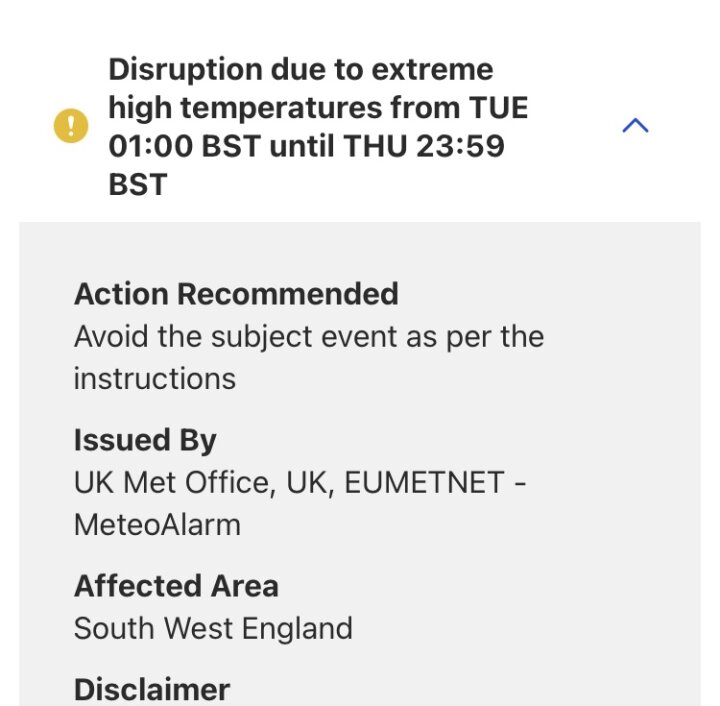 SOUTH WEST ENGLAND IS NOT A GREAT PLACE TO BE TODAY 🥵

Classified · M
[@561899,BalmyNites] Hopefully it helps 🤗 Not sure whether it has to be hot. Maybe body temperature actually works better? 🤔
I think chilled water works too and it gives relief when you drink it, but you body will probably try to warm it up as a side effect. 🤔
+ 1

BalmyNites · F
[@376270,TimingQuasars] We have no air-conditioning, we are totally unprepared
+ 1 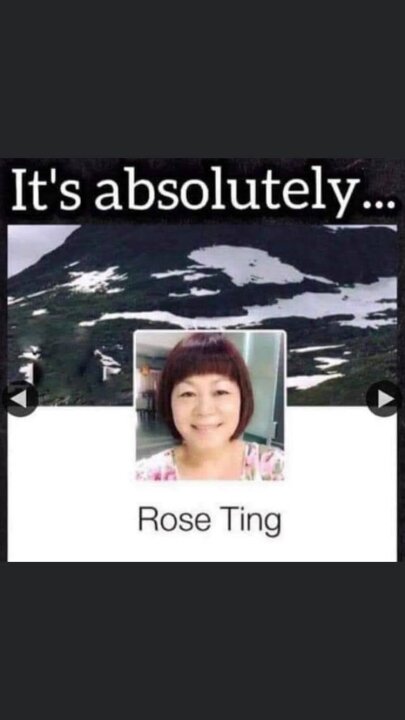 I daresay a few may have it; but generally our spells of very hot weather are not intense enough or long enough to justify the capital and running-costs of air-conditioning in an ordinary house.

We just open the windows (of which probably most now are doube-glazed) and let the breeze blow through, and that's usually enough.

A different matter for large commercial premises, espcially those built either with acres of glass or with very few openings to the fresh air and sunlight.
+ 2

ArishMell · 61-69, M
[@339269,JimboSaturn] It will be interesting to see how things develop in the UK if hotter and longer spells become the norm. I think the cost alone of installing air-conditioning throughout houses not built for it, will deter many householders; but it may be feasible in the more expensive housing developments among the many yet to be built.

Conversely, it will be equally interesting to see how the ending of fitting new gas-heating boilers in new homes built in the UK from 2025 onwards, part of a drive to go all-electric generally, will work....
+ 2

As far as I recall the Met. Office never previously issued heat warnings, just forecasts of hot weather, because heat-waves were normally spasmodic and short-lived; and temperatures over 30ºC were quite rare, short-term, fairly local occurrences.

So if the decision to add those is a new response to such events possibly becoming more frequent and more severe, it should be praised; not criticised for something that was not past policy. It would be negligent only if it does not issue such warnings in future.

At least the weather's cooled down a bit now. We've had some rain, thankfully, the sky is heavily overcast, and I think sun and showers is the pattern for the next few days.
+ 1

ArishMell · 61-69, M
I cannot understand why people are merely criticising it.

Presumably the Meteorological Office has established statistically, maxima and minima to define "extreme" conditions compared with historical [i]mean [/i]weather behaviour and values. It's not a mere record-chasing exercise - that's for dozy "red-top" journalists to play!

No-one denies those past extreme events, nor their severity, but they happened before the Met. Office developed the present warnings and definitions.

The significant point would be whether the present extremes will be more isolated events or part of a developing pattern.

It should be remembered too, that these are extreme in British Isles climate terms.
+ 1

The name was MartinlI think
+ 1 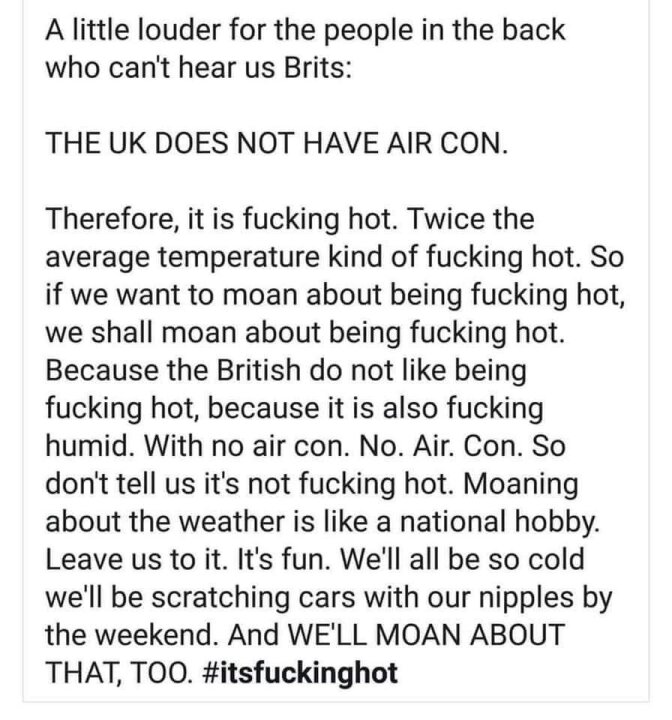 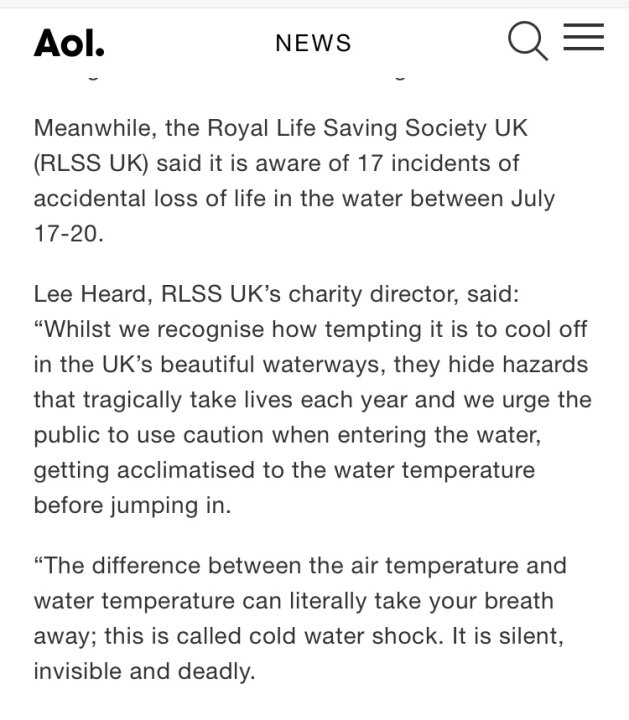 They simply cannot comprehend that we live in a temperate climate, we do not have extremes of temps so this is deadly

Plus, as you say, no air con

Just block the fools, they’re a waste of oxygen tbh
+ 2

annamk · 26-30, F
Just been on the scales and I lost 5lbs and an inch from my waist in the last 2 weeks😅I definitely sweated half of it off. It's a shame it has cooled again now, I never feel like eating when it is that hot😂
+ 3