Another proof of why beauty standards are ridiculous 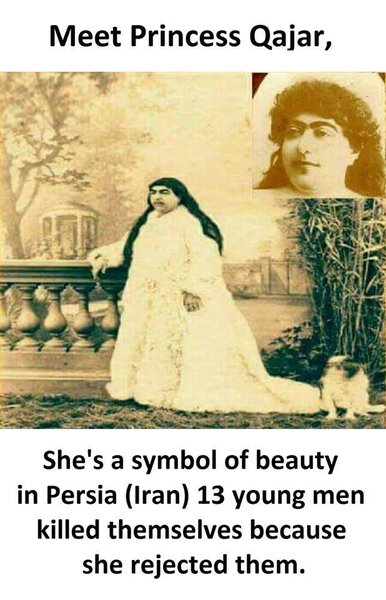 katielass · F Best Comment
I'd think it more likely they'd kill themselves if they thought she might have an interest in them.
+ 1

katielass · F
Thanks for BA but really, are you sure that's a she?
+ 1 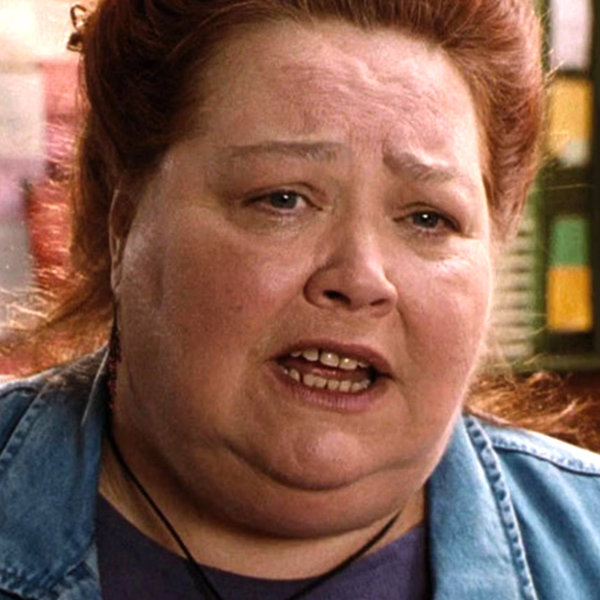 DancingStarGoddess ·
fascinating. standards of beauty in the days past were much much different than today
here's some insight on it
https://abitofhistoryblog.wordpress.com/2017/12/12/princess-qajar-and-the-problem-with-history-memes/
+ 1

DancingStarGoddess ·
[@683926,FromAtoL] absolutely. this article i've found does say there's another girl who is more the focus, but that most of it's not true, but that her appearance most notably her moustache was said to indeed be seen as "beautiful" in her time. it's lovely to know though that in some countries, certain things are still considered beautiful as they always were, regardless of how the rest of the world changes.
+ 2

Peekaboo20 · 22-25, F
More likely her father desperately tried to arrange marriages and had them killed for rejecting his ugly daughter. He then rewrote history.
+ 3

TheLoveAge · 31-35, F
So many people lose their chance of true love because it's not how it 'should' look like, physically and otherwise. It's sad.
+ 2

sighmeupforthat · 41-45, M
Wow, and these prizes judging someone they never knew.
+ 1

iQuit · F
proof that money and power buys people over

just saying she was a princess and her dad had power
so... who says these guys killed themselves and that they were not indeed killed off for stepping out of bounds?

SW User
[@11014,ForNever] You're missing my point. I'm merely talking about how beauty standards have a negative impact on people, not the evolution of beauty standards.
+ 0 · Reply · Feb 9, 2018

iQuit · F
[@683926,FromAtoL] but they don't have a tremendous negative impact

[b]beauty is like art[/b]
some people can admire it for what it is and hope to one day be as a muse to another
then, there are some who don't fancy it because it clashes with their visions

but really life's too short to demonize the art of beauty

the deep rooted negative would probably be correlated to each person's internal struggle to what they think others will see which will make them accepted by all but...

people are TOO knit-picky and beauty but scratches the surface

I am not missing the point you are fighting to make stand out....
I just choose to look past the fickle mind set that this is what controls and is absolute to everyone

Plus, as you've read there are too many other points that affect lives besides the initial concept of beauty

Rendering this as the most absolute of all horrid concepts would completely ignore other negatives that affect the lives of many.

Plus you ignore that there is not 1 standard.
Maybe you have something that is bothering you deeply and for that it's understandable. You probably speak with such hatred of a concept that you've conceived to be one absolute way. When my perspective simply clashes with yours a bit and opens the horizons to this multi-perspective natural subject that is basic not only not the human species but to all creation.
+ 1

SW User
[@11014,ForNever] I didn't say there was one standard, so I said standard[u]s[/u]. Look, I understand your approach towards this problem but this has nothing to do with art of beauty and other problems of the world. The bad impact made by beauty standards is best recognized by people who actually have to suffer from them. In every country, there are girls putting themselves down for not being pretty enough, which is measured by beauty standards. Beauty standards drive girls crazy enough to harm their self-esteems through cosmetic surgeries and indulgence in beauty products. The fashion industry depicts the beauty that they call standard without knowing they're crushing many people's (especially young girls) dreams of pursuing a related career. Artists are being criticized by the society for flaws like not having a small waist, boobs are too small, eyes are too narrowed, etc and this actually affects their lives as well as their careers. They are forced to live up to what the public thinks is beauty standard in order not to fall behind. Anyone can't keep up with the standards can end up with health disorders resulting from their depression of body shaming. Where you got me wrong was that you thought I didn't accept how beauty has changed since the past when I actually do accept it. What I do not accept is how [b]people[/b] can't be more open to different kinds of beauty, especially people with power over the mainstream. They're influencing our generation negatively with fickle standards of beauty just for profits and fame.

I agree with your point that there is no such thing as beauty standards because beauty can come from anywhere, hence this post I made about princess Qajar. If you do some research about problems associated with beauty standards, you will see it is not a small issue at all.