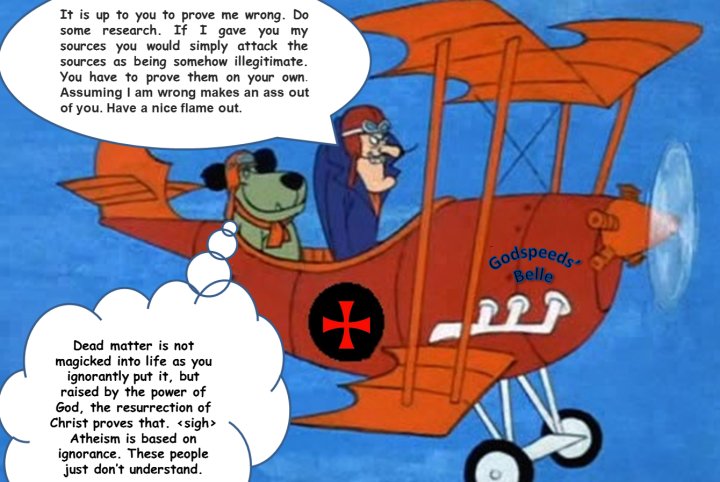 I Am An Agnostic Atheist

Follow
Notifications: · Newest First
5 weeks ago Godspeed63 started another threat on this forum with the provocative name: [b]"Science Really Does Point To God"[/b]. Now the evidence of that claim is seriously under investigation. So far... to say it's "inconclusive" is a really friendly way of saying that there isn't much there.

Speedyman got the "Best Answer" which supposedly is this one:

[quote]Simply by accepting the scientific method you are accepting a rational universe therefore a rational mind behind it. Unless you are one of those irrational people who believes blind chance creates rationality[/quote]

It generated over 770 replies (so far). The side of people that are closely related to a religious mindset, spearheaded by: Godspeed63, Speedyman and Hippyjoe1955 contributed quite a lot.

Now some of the replies (on both sides) never really lead to much progress. It's more name calling from both sides and people feeling attacked in their believes. Which you can kinda expect from discussions like this. But I think if people go and read the entire thing, they will come fairly close to the summary I give in reply 770 on how religious people defend themselves. (read up here: https://similarworlds.com/19-Spirituality-Religion/2675808-Science-Really-Does-Point-To-God-No-Question-About?rid=31217251)

Annyway, this is post 770, or how you defend a dogmatic position against scientific data (or how you rationalise things that don't coop with your religious-dataset):

[b]1.[/b] The only source that matter, is the bible. If something goes against the bible. It has to be wrong.

[b]2.[/b] Say something, but don't state your source. If they don't accept your "truth" then they are asses for being sceptical. [i](The burden of proof is for those that don't agree with you. That's how the inquisition did it, and it worked for them. Why change a working system?)[/i]

[b]3.[/b] If you can't make your point in a rational way, and back it up with facts, apply terror. They either accept what you tell them, or let them know that they are going to burn in hell for not accepting your truth. [i](Tell them to "have a nice flame out", it's the Christian thing to do)[/i]

[b]6.[/b] If people still don't believe you, then tell them they are ignorant and are unable to understand. Always seek the moral high-ground. Make your opponent look inferior... even if they quote the bible. People that look idiotic have no claim on the truth, only people that look virtuous and smart can claim to know things.

[b]7.[/b] If someone does make a point that is literally in the bible. Make sure to tell them that only "real" believers can interpretate the bible. Never EVER define "real", just make sure they know that you are one of the "real" ones. Because atheists are able to read scientific papers, but the bible just isn't for them.

[b]8.[/b] If someone uses science to debunk the bible, look for a few missteps in science. Then tell everyone that science is wrong because some scientists make mistakes. The Nirvana fallacy is your friend. Apply the same reasoning the agnostic atheists do. If they can use the nirvana fallacy to debunk the basic dataset of a religion, then why can't we? Never EVER agree that science and religion are not the same thing. Never EVER agree that science has a human characteristic. Extrapolate the "believe" in science to a "religious believe". Science is a religion and should be treated just like our religion is treated. Science is a cult! Wreck 'm!

[b]9.[/b] Only use scientific studies if they work in your favor. Be "sceptical" about all the others [i](apply rule 8 )[/i]. When they ask you if you are knowledgeble about the "toppic" or "field" you are quoting a studie off, always respond with: "yes" or "I have a really smart friend that explained it to me" [i](preferably a "scientific" friend, that doesn't belong to the science cult and says the same thing we do. Make sure to mention your friend is really smart. If your friend doesn't study the field (s)he criticises, make sure to mention that doesn't matter because (s)he is so smart. Anekdotal evidence works for us, because we know what is smart and others don't. - apply rule 6 )[/i].

[b]10.[/b] Never ever loose faith in what you believe, because else we'll burn in hell too. God doesn't apply terror, He loves us because we believe in Him and makes us burn if we are sceptical of Him. [i](that's just how love works... proof us wrong 🤷‍♂️)[/i]

[i](oh yeah, the text in the image... those are literal quotes from the threat. I'm not making this up.)[/i]

1. Like what you are saying in the first part? If I understand you correctly there is a "duty" or "responsibility" which have to do during life? And we can't wait to find out if we discover reasons to carry out our assigned duty? Is that correct?

2. I absolutely have no idea what point your are trying to make with the second one. Please elaborate.

Byron8by7 · M
I have seen enough of this sort of thing that I no longer participate in such threads - it is an exercise in futility. I recognize the text in the top bubble in the above image - I can tell who posted it. "Do some research" is his typical response. He never reveals his "sources." Such a jerk.
2 · Reply · Jun 17, 2019 | ·

ImKelsey · 22-25, F
I also remember the post. Don't let them trigger you into exposing them by their mind set. Be more concerned about remaining at the level of agnostic atheist. Progress beyond!
1 · Reply · Jul 30, 2019 | ·
Edited: 11 mths ago