a lot of minorities have this idealism that white people dislike minorites or whatever...

white people alienate me too. white people like to "stick together" like any other race does. But more tighter.(from my personal experience)

I have always felt alienated from white people because even when i lived in GA i was originally born in FL so my mom didn't have any friends, neither did my grandmother. they alienate me because i'm not "one of them" because I'm from florida, and the same goes for the latter. they alienated me because we were poor and not in the same imaginary "class" as they appointed themself

minorities (before i write what I'm going to write i would like to include the definition of a minority because it's oftentimes associated with just african americans and that's not entirely correct.) the smaller number or part, especially a number that is less than half the whole number:

i was always drawn to minorities and they were drawn to me. i had more african american and latino friends than i did white. (in georgia there is not much diversity) I'm pretty sure I still do but now my friends consist of an even more diverse spectrum.. Jamaican, Haitian, asian, Filipino, Dominican, Puerto Rican, colombian, Peruvian, african it goes on and on and on and on and on


I don't act a certain way and neither do my friends. But i was able to relate to them more and they were able to relate to me more. why? because we didn't get the privilege of having generational wealth like some people who exclude us for the very same reason. we don't judge one another because of the socioeconomic status we hold. We are viewing each other in a much more meaningful way.

i am very aware racism is real. it's real on all parts though. and the reason some races and groups assume other people are racists is because they poorly understand one another. this is becoming clearer and clearer to me. and a good example of this is being excluded from social groups and people think oh its because i'm not white. no it's because they are a different socio-economical class than us and they have no problem letting us know.

I've been wanting to say this for a while now i just wasn't sure how to say it. Please feel free to add. i think the beauty about this website is we can actually talk about subjects like this where we would get banned from other social media. i think many posts like this shed a lot of light on issues people don't want to talk about but it would actually benefit people if we did talk about them....

KiligAF · 18-21, F Best Comment
I don’t like some minorities’ mentality of blaming on race for problems that are deeply rooted in socio-economic, such as the differences in wealth. The differences in wealth between different races have very little to do with race and more to do with socio-economic. Asians are doing so much better now, even better than the white folks. There’s nothing that can stop you from becoming successful in America no matter what your race is.
+ 3

DeluxedEdition · 22-25, F
[@385726,KiligAF] TRUTH Or they act like their opinions are above everyone else’s because they’re a white personal speaking on the matter 🤨

But fail to see the own hypocrisy in their actions
+ 1

uncleshawn · 36-40, M
[@385726,KiligAF] Thanks for writing that. ....My Asian friends are mostly doing better than I am, and I am glad for them. I grew up around liberals in the family and in the Academy, where I got to see how they spoke and behaved in private and in totality. This began to hit me when I was in university: there are way more racists on the left -- people who look down on others, and help (or say they help but really don't) them in order to show how moral they are for helping people [b][u]who they believe are beneath them[/u][/b]. The older I get, the more clear this has become to me.
+ 2

boudinMan · 56-60, M
i live in the suburbs of atlanta, georgia. there is a huge latino population, as well as indian, chinese, korean, romanian, etc. i can only assume you lived in one of the smaller towns in georgia.
+ 1 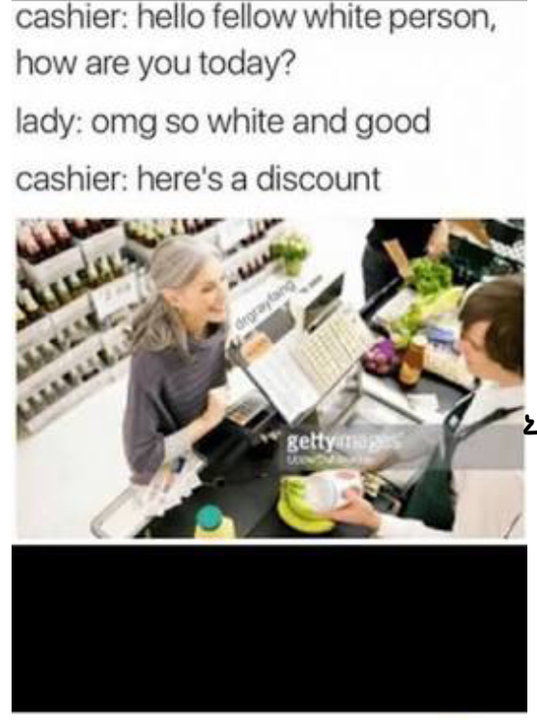