It's the best place for me to roam free and recharge my batteries! The... | I Love Forests | Similar Worlds
I Love Forests
Follow
Positive
No Notifications
Only logged in members can reply and interact with the post.
Join Similar Worlds today »

It's the best place for me to roam free and recharge my batteries!

The Vallombrosa Forest is one of the most famous greenery spaces in Italy. When monks settled in Vallombrosa in the 11th century, forests of silver firs and beech trees already existed. Caring for the forest was one of the abbots’ concerns, who pulled the resources necessary for life at the Abbey from the woods and from breeding sheep. The long trunks of the firs were an important asset and for centuries they were used in the construction and renovation of Florentine palaces, and so the monks did all they could to extend and look after of the growth of the fir woods.

After the foundation of the Kingdom of Italy, the forest became property of the State, and in 1977, it became a Biogenetic Nature Reserve. Visitors to this area can observe the tallest tree in Italy, a 62.45-meter tall Douglas fir called "The Italian Tree King." Another fir, a short distance from the first one, claims second place. Both can be reached via a forest trail.

Every year, the Vallombrosa Forest is visited by thousands of tourists, as well as students from the Department of Forestry at the University of Florence, who has an educational site in Vallombrosa.

The forest extends over 1,279 hectares and ranges from 450 and 1,450 metres above sea level. The most common species, in addition to silver firs, are beech trees (widespread in higher elevations), black pines and Douglas firs. Chestnut trees, oaks, maples and hornbeams grow at lower altitudes.

The Reserve is also home to one of the most famous Experimental Arboretums in Europe, where more than 3000 specimens of over 1000 botanical entities, belonging to 85 genera and coming from different parts of the world, live together. During the summer months, the Arboretums can be visited thanks to Carabinieri Department for Biodiversity of Vallombrosa.

I am at my best when I am roaming the forest with my dogs, or with other friends! It's the liberty of the freedom of the trees, the peacefulness and the calmness. It's really my idyll, above all things. 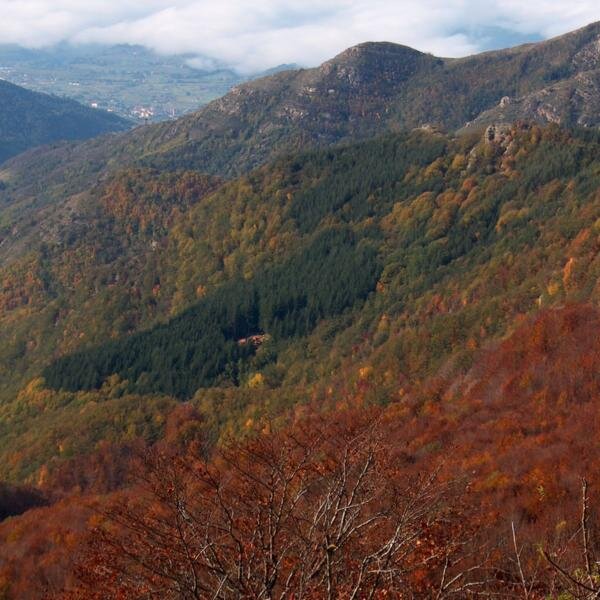 4meAndyou · F
Looks like some places in Vermont and Maine, in the USA. I used to camp in the summer in western Massachusetts sometimes, and it looks a lot like that, too, but with lower foothills to the Appalachian mountains,
+ 1