The most badass thing I’ve ever read. With this week being anniversary of t... | Miscellaneous | Similar Worlds
Miscellaneous
Follow
Positive
No Notifications
Only logged in members can reply and interact with the post.
Join Similar Worlds today »

The most badass thing I’ve ever read.

With this week being anniversary of the D-Day landings there’s a few posts going around of special individuals. There’s this guy: 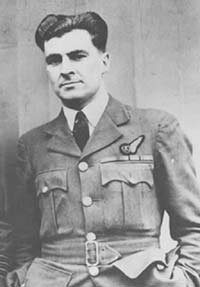 This is Norman Jackson a recipient of the Victoria Cross, Britain’s highest honour for servicemen. He was a crew member of a Lancaster bomber who on night raid against a factory in Germany came under attack from a fighter. He’s wounded by shell splinters from the the attack and out of action.

Realising the right wing of the plane is on fire he straps on a parachute, grabs a fire extinguisher and [b]climbs out of the plane on to the wing[/b] while it’s flying and fights the flames with the extinguisher. His hands and face are burned in the process but he hung on. A second attack from the fighter blows him clean off the wing. The rest of the crew make it home but he was captured by the Germans and paraded through the streets before being imprisoned.

Despite his wounds he escaped from a POW camp and made contact with the US army in France and reunited with his old crew.

The balls on this guy, how did he fit them in the plane??

WintaTheAngle · 41-45, M
[@549497,uncleshawn] Thanks very much for the link. Yes what an incredible man, such bravery and only 25 years old. I think if they made a film of his experience it would be dismissed as wild fiction. But here’s to him. Thanks for the reply.
+ 1

uncleshawn · 36-40, M
[@1064814,WintaTheAngle] Thank you for posting it. There is a website that lists all the citations for Medal of Honor winners of the U.S. I skimmed part of it once to get a sense of things. Stunning. Like you said, there need to be movies about these people. Then just recently I came across the story of the British attack on the German naval base in France to destroy the gate of the drydock for the big battleship that was at sea. That has got to be made into a movie.
+ 1

WintaTheAngle · 41-45, M
[@549497,uncleshawn] I get lost on sites like that going from one hair razing story to another. People should certainly be aware of these people. Especially in a time when negativity and ridicule seem to be so fashionable, it’s important we have these examples of normal everyday people who refused to accept a negative situation and did something incredible. Veterans stories seem to get written off as tasteless and jingoistic by people today but I think they’re just amazing.
+ 1

questionWeaver
Heros and they did not know it
+ 1

Thevy29 · 36-40, M
There is a website called 'Badass of the week' and Norman Jackson would be a worthy addition. You should check the site out if your interested.
I recall reading about a guy on that site (forget his name) a Scotsman. Who enlisted for WW2. Never liked guns. Preferred a long bow and a highland sword. Was part of the group that stormed the beach of Normandy and even captured a machine gun post full of Germans. Strange I can recall all that but not his name. Dude is a fuckin legend.
+ 2

MightyAphrodite · F
Wow, there should be a movie about this guy, that's some mission impossible stuff there
+ 1 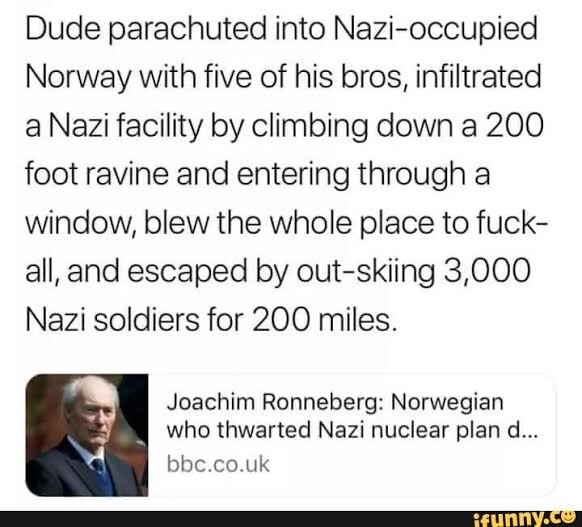 WintaTheAngle · 41-45, M
[@23671,basilfawlty89] Agreed. Military defeat didn’t mean the defeat of people who would not be frightened into submission even though the cost of failure was so great.
+ 1