Extremely attractive people are less likely to get hired due to hiring bias - Study. Has anyone faced it before?

It seems there is a hiring bias against attractive people. But there are studies that also say,attractive people tend to have more resources than the rest of the lot.Hmmm. 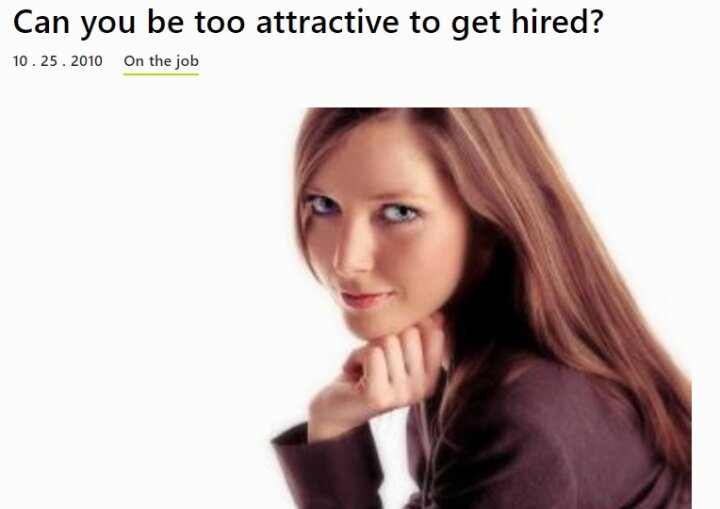 Doomflower · 36-40, F
It wouldn't surprise me to find the very ugly and extra pretty would get treated differently.

It also has a lot to do with the person doing the hiring I imagine.
+ 1

TeirdalinFirefall · 26-30
It probably depends on the job. But I'm pretty sure I'd be less likely to hire both incredibly ugly and incredibly good looking people than I would for standard middle-road appearance people.
+ 1

smileylovesgaming · 26-30, F
Would u rather hire the girl or guy with the face cover in tattoos or piercings
+ 1

harmlesscheesecake · 41-45, F
Bull. Id assess an employee not on their looks but their skills and experiences. No one gives a damn about an attractive face. I need an employee that will work hard
+ 0 · Reply · Aug 14, 2020

johntomSWPhd · 31-35
[@403074,harmlesscheesecake] The employee in question might be very lower down the rug, like you said someone who will work for you. But if it were a recruitment between equals, then the dynamics would change, that is what the study was implying.
+ 0 · Reply · Aug 14, 2020

SwampFlower · 26-30, F
I think the relationship between attractiveness and hireability would be curvilinear. They won't hire you if you're too ugly either, because it poorly represents the company. They have done studies on that. I guess too attractive would make you some kind of perceived threat.
+ 2

I would like to see a paper that tests that threshold. Is there an optimal level of attractiveness?
+ 1

johntomSWPhd · 31-35
[@871066,SwampFlower] Its not in this paper, this paper is pretty basic.I read it somewhere else.Some commentators below has alluded to it. Well, there is noo threshold I guess.Something to do with facial symmetry.
+ 0 · Reply · Aug 14, 2020

EuphoricTurtle · 36-40, M
My dad had an unofficial policy of not hiring attractive girls to the office because he thought it would just distract the guys at the warehouse.

Oddly enough he did make one exception when one of the guys asked him personally to hire his future daughter-in-law. The result?
Her and another guy from the warehouse fell in love, she broke up her engagement, and her now ex future father-in-law was fired after starting a fight with the opther guy.
+ 1

pknein · 41-45, M
It's moderated by the gender of the hiring 'manager' and also conflicts with existing research-- although I haven't read the actual paper so there may be differences in approach that explain the differences.

But still, overwhelmingly there is a bias towards attractiveness-- as even the linked article points out.. you are better off being attractive than not in almost all walks of life.
+ 0 · Reply · Aug 14, 2020
Edited: 8 mths ago

johntomSWPhd · 31-35
[@372815,pknein] There is a bias shown by male managers towards beautiful female candiates who are preferred, but male managers cannot take handsome men with whom they are biased against. Also, Female managers are biased against beautiful female candidates. Yes, I agree, overall its a net positive being attractive. But its functionalities might not be applicable in the job market and could even be a handicap.
+ 0 · Reply · Aug 14, 2020
Edited: 8 mths ago

pknein · 41-45, M
[@1113898,johntomSWPhd] it is applicable.. there are other studies that show a hiring bias towards attractive candidates - although those too are more nuanced than just "attractive is good". But on the larger point of general benefit of attractiveness:

SW User
I’ve never came across that before for standard jobs , I have only came across people being turned down for having unique styles or dyed hair but for being too attractive never heard of that or seen that happen. If it was modelling I could understand why it happens because I’m a model myself part time and I’ve been turned down loads of times for not fitting into their standards as each brand or agency has different ideas , there is one I asked about but never heard anything back which only has people with visible disabilities or unique facial features or conditions , I suppose I looked too normal for them.
+ 0 · Reply · Aug 14, 2020

johntomSWPhd · 31-35
[@1132510,Ladylavinia] Well, if your hiring manager was a female, in all likelyhood this was the case. Now, if you ask me. Models in general I consider to be not that attractive. I have seen normal chikcs who are way way ahead in the attractiveness scale, atleast as per me. Perhaps you are one like that. Its likely you faced some type of bias.
+ 0 · Reply · Aug 14, 2020