Home Groups People
From the Breitbart comment section All this means is that Powell is NOT bei... | Politics | Similar Worlds
Politics
Follow
No Notifications
Only logged in members can reply and interact with the post.
Join Similar Worlds today »

[quote]All this means is that Powell is NOT being paid by the President or from the RNC. Powell needs her OWN funding to carry this out. The President wants people to know this. Her and Wood are working for the American people. Plain and simple.

Trump did not throw Powell or Wood under the Bus.[/quote]

When your fetish is being grifted.

Kwek00 · 36-40, M
Why did they throw Powell under the bus and not Rudy? Wasn't Rudy repeating and defending everything Powell said too? ... I apperently missed this bit of drama. And how do these people determine when something is "too wacky"?
+ 1

QuixoticSoul · 36-40, M
[@421865,Kwek00] Last Thursday Rudy and her appeared in a press conference together with official trump banners and everything. And then... 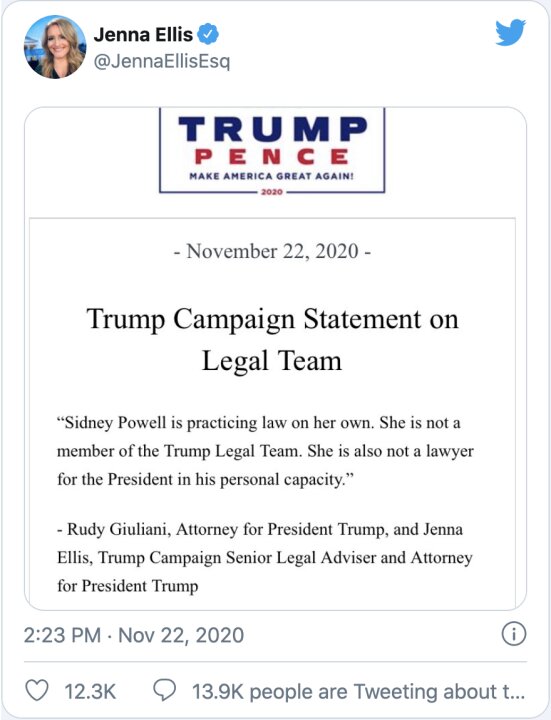 [quote][b]Rudi Guiliani:[/b] [i]We have [b]enough evidence[/b] without that to overturn this election. We have it from the affidavits of American citizens, but that’s [b]a matter of national security[/b] that we’re talking about now, very, very serious matter of national security. Please don’t make light of it and don’t act like you knew it, don’t act like it isn’t a surprise. If that’s not a headline tomorrow, then you don’t know what a headline is. There isn’t a single person in this country that would have believed that we have states that are stupid enough to have our vote sent out of this country. You couldn’t possibly believe [b]that the company counting our vote, with control over our vote is owned by two [u]Venezuelans[/u] who were allies of [u]Chavez[/u], are present allies of [u]Maduro[/u], with a company whose Chairman is a close associate and business partner of [u]George Soros[/u] the biggest donor to the [u]Democrat party[/u], the biggest donor to [u]Antifa[/u], and the biggest donor of [u]Black Lives Matter[/u].[/b] My goodness, what do we have to do to get you to give our people the truth? Yes.[/i][/quote]

MistyCee
About what I'd expect from people commenting on Breitbart, I guess.

No doubt this ties into the QAnon stuff somewhere.
+ 2