Renting an Apartment in London vs Berlin
Whether you’re moving to Germany or the UK, the biggest living cost is renting a house or an apartment.

This is particularly true if you’re planning to move to London, where real estate prices and rental costs are renowned for being one of the highest in the world.

And exactly how much is that, you may ask.
You can expect to pay anything between £1,000 to £2,000 per month to rent a one bedroom apartment in London.

Compare that to what an average Londoner earns per month and you can easily wipe out half your monthly salary paying rent alone. And if you want to live close to the city center of London in zone 1, 2, or 3, be prepared to budget up to 70% of your salary for rent!

Yikes? The word ‘insane’ may be more appropriate.

The cost of living in London is one of the biggest hurdles of moving abroad to the UK
Rental prices in Berlin have been increasing rapidly over the last decade. But are still considered fairly reasonable compared to other major cities in Western Europe.

Much more reasonable, right? Plus, the chances of living in a larger, more spacious apartment are much higher in Berlin vs London.

Renting Apartments in Berlin
The much lower rental costs for living in Berlin vs London is a HUGE pro for moving to Germany vs the UK. But with the cheaper rent comes it’s own con: it’s notoriously challenging and stressful finding an apartment to rent in Berlin. We know from personal experience!

The combination of the lack of supply, language barrier, and the huge demand from expats looking to move to Berlin makes the task even harder.

But don’t worry. You can dramatically boost your chances of renting an apartment or flat in Berlin if you’re armed with the right resources, information, and mentality.

Public Transportation Cost
Public transportation is another essential monthly expense to consider when deciding between living in London vs Berlin. And if you’re leaning towards moving to London, it will probably be your second highest living expense.

The cost of public transport depends on which zone you live in of course. So we’ve compared the monthly and yearly public transportation ticket for London vs Berlin using the zones within the city’s main transport ring to make it comparable.

For London that would be zones 1 to 6 and for Berlin, zones A, B and C.

Most people in Berlin are able and likely to live within Zones A and B, which brings your public transport costs lower to around £75 (or €84) per month. And if you want to bring the cost of getting around even lower, you can also opt for the bike life.

Food and Grocery Prices
Food and grocery prices are surprisingly similar whether you’re living in Berlin or London. This is only true if you’re cooking the meals yourself though.

If you do your food shopping at mid-range grocery stores like Sainsbury or Tesco in London, you can expect to spend around £180 per person per month.

This is quite similar to how much we spend on food and groceries in Berlin shopping at our mid-range equivalents (Edeka and Rewe), which is around €200 (£180) per person per month.

If you love visiting cute cafes or dining out, then London is way more expensive. According to Numbeo, it’s around 30% to 40% more expensive to dine out in London vs Berlin.

Something worth noting if you’re a big foodie deciding between moving to Berlin vs London.

Other Monthly Expenses Living in London vs Berlin
Overall, you can expect the cost of living in London to be around £2,300 per person per month vs €1,100 (£980) for Berlin if you rent a one bedroom apartment.

Looking at the cost of living alone, Berlin is the clear winner. But it really depends on your income, living with my Mum makes it all so much more comparable. 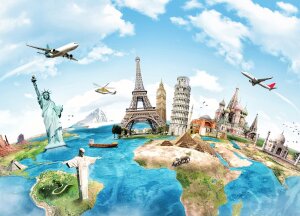