Who Is PIERRE DELECTO? MITT ROMNEY - Of COURSE!

Humm...it seems our Mormon paragon is also a student of Latin and his choice of Latin verbs for his fictitious surname is perhaps revealing. Here are the possible translations -

ravish - (as in "en flagrante delecto" - the polite term for RAPE in the 19th Century!).


Looks like we have just entered Carlos Dangerous (aka Rep. Anthony Weiner) territory, no?

Here's from Mitt - “What do they call me, a lurker?” — to keep tabs on the political conversation." No, fuckhead...they call people like you a STALKER!

He used this Twitter account to attack people without having to reveal his REAL NAME.
Nice. The exact caliber of Trump's enemies. In other words, just another lying, sneaky, no class, no honor and no balls Trump hater. I give you the words of the great Joseph Conrad from his novel "Lord Jim" -

"A man is know by his enemies as well as by his friends."

So Leftist Trump haters, you are welcome to Pierre Delecto (Pierre? I mean, really...PIERRE?!?) just like you are to Carlos Dangerous and am looking forward to seeing if, when and where "Pierre Delecto" turns up on social media and pornographic web sites.

Earlier today, the Atlantic’s McKay Coppins published a lengthy profile on Mitt Romney, apparently part of Romney’s effort to set himself up as the noble Republican foil to an out-of-control president. These sorts of pieces, which are more about narrative setting than anything else, typically don’t contain a lot of new information, but this had one notable exception. About midway through, the usually guarded senator revealed that, just like fellow lone-voice-of reason-haver James Comey, he was the owner of a secret Twitter account.
At one point, as Coppins asked him about the #IMPEACHMITTROMNEY hashtag Trump tweeted into being earlier this month, Romney said this:
“That’s kind of what he does,” Romney said with a shrug, and then got up to retrieve an iPad from his desk. He explained that he uses a secret Twitter account—“What do they call me, a lurker?”—to keep tabs on the political conversation. “I won’t give you the name of it,” he said, but “I’m following 668 people.” Swiping at his tablet, he recited some of the accounts he follows, including journalists, late-night comedians (“What’s his name, the big redhead from Boston?”), and athletes. Trump was not among them. “He tweets so much,” Romney said, comparing the president to one of his nieces who overshares on Instagram. “I love her, but it’s like, Ah, it’s too much.”

In other words, a wealth of information that would be highly useful to anyone hoping to track down the senator’s supposedly secret Twitter hideout— or more specifically, to me. The chances seemed high that Romney, a known family man, would want to keep close tabs on his offspring. And as luck would have it, Romney has plenty of offspring .
Not all of his five sons have public Twitter accounts, and some of them, like the dreaded Tagg, have too many followers to possibly dig through. Romney’s oldest grandchild, Allie Romney Critchlow, however, has just 481 followers, making digging through them an annoying-but-not-impossible feat. As I scrolled, while focusing on the ones that appeared to make an effort to conceal their real identities, one in particular caught my eye.

SW User
Lol, I saw that on twitter. He apparently was defending himself with his alt account. It's funny.
+ 2

katielass · F
Only a true loser would set up a false name so he could say things he didn't have the balls to say outright and liking his own posts was really the icing on the cake. The only thing about this that surprises me is that he came up with such a clever name. Must have had help with that.
+ 1

So tell me, Pierre, when did you and Mitt start hanging together and how has your new fame been treating you?
+ 2 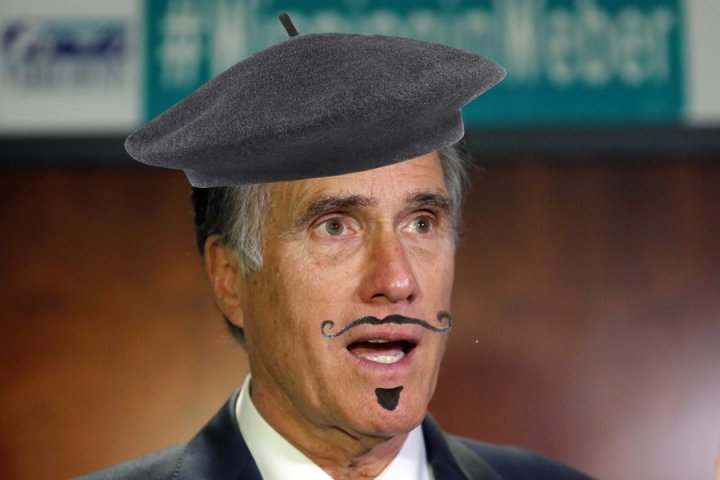 daydeeo · 61-69, M
Sounds like Pierre was inspired by Carlos.
So Mitt is not a saint, but has a dark side just like every other human.
+ 1

CountScrofula · 41-45, M
lol, so Romney has his own equivalent to John Barron. Hilarious. Romney can get fired out of a cannon.
+ 1

CountScrofula · 41-45, M
[@5932,Abrienda] I don't like Trump but I don't like the old never-Trump Republicans and I don't like the Democrats either. It's a system of baked-in corruption and rewarding your donors. Part of Trump's initial success was pointing that out - the whole 'drain the swamp' thing.

I don't have much faith in electoral politics in general (at least in the US and Canada) and advocate for on the ground organizing. I've had a lot more success running my own campaigns than I have in expecting politicians to do it for me.
+ 1

Abrienda · 22-25, F
[@624254,CountScrofula] I think you have described how I would feel were I living in the USA. I distrust all government for exactly the same reasons. I think our solutions and what we think are the causes are different but we absolutely agree on the nature of the problem.
+ 2

CountScrofula · 41-45, M
[@5932,Abrienda] That's what I find when you're coming at things from opposite ends of the political spectrum.

What the nationalist right refers to as globalism I came up calling neoliberalism. The idea that the Clintons and the Bushes were basically part of the same political force and just differed on social issues - free trade, foreign policy to secure resources and markets, big international corporations, and heavy outsourcing.
+ 0 · Reply · Oct 22, 2019

Abrienda · 22-25, F
[@18045,akindheart] Yes...he is trying to make it look all innocent but it is a LEAST weird, controlling and compulsive (along with sneaky and dishonest) and I think the "Oh gee no big deal" and his giving up just enough information to make it look harmless (though still weird) is his way of trying to prevent anyone from looking deeper...Wiener made similar statements when he was caught, too.
+ 1