Who Is Getting Thousands of Gang Stalking Reports Every Month?

"On or about October 29, 2008, I called the National Center for Victims of Crime's telephone help-line at 1-800-394-2255 and spoke to a victim advocate employee.
I asked her if she was aware of gang stalking and if she offered any help.
During that conversation she told me she was aware of gang stalking, but that it was not a crime that NCVC provided any referral or help for.
She also acknowledged that a large number of calls were regularly coming through the hot-line regarding gang stalking from all around the United States.
Upon being asked to estimate the number of gang stalking calls she received, she said ten percent of the average call volume during her shift.
She also admitted that NCVC kept 'tallies' on the different types of complaints it received over the hotline from victims.
Shortly thereafter I called back and spoke with another hotline advocate and she also estimated that ten percent of the calls she received were gang stalking complaints.
She admitted this meant thousands of calls per month!

Shortly thereafter, I called a third hotline advocate and asked her whether she could send me information regarding gang stalking complaints received by NCVC including statistics and/or tally numbers.
She informed me (that) I would have to speak to her supervisor who she identified as Colleen.
I asked when Colleen would be available to speak and she told me the next day.

On or about October 29, I called NCVC several times and finally got through to Colleen.
I had a conversation with her and she acknowledged that she was familiar with the gang stalking calls being regularly received by NCVC.
When I asked her to put something in writing regarding the gang stalking complaints being regularly received by NCVC, preferably with statistics, and sent to me, she told me she would not 'memorialize' it in such a manner.
I then asked for her supervisor's name and contact information.
She then took my name and contact information, including my email address.
She first refused to tell me her supervisor's name.
After I complained that she had taken my name and contact information, she relented and told me his name was 'Kevin.'
I found this type of secrecy in a non-governmental organization peculiar.

Later that same day, on October 30, 2008, I spoke with Kevin via a phone call I received from him.
He identified himself as the Director of Victim's Services at NCVC.
He acknowledged that organized gang stalking complaints were coming in to the hotline, and further stated that no help or referral was being given.
He said that he had no organization to refer these complaints to for help, and that the role of NCVC was largely that of a referral service to government and private victim support organizations.
He told me (that) he would put together some information related to the gang stalking problem, and try to include statistics.
We agreed that said letter would be e-mailed by NCVC to my e-mail address on NCVC's letterhead.
He said that he would first have to clear the transmission of this information with the United States Department of Justice (DOJ) because there was a clause in NCVC's federal funding contract with DOJ that made all of NCVC's internal information and records subject to DOJ control.
When I clarified that this meant that DOJ had a property right to the information, he agreed this was accurate.
He said, however, that he did not foresee this being a problem and I expected (that) I would receive the information on gang stalking.
The conversation was wholly amiable in tone from start to finish.

The next day, on or about October 31, 2008, I received an e-mail from the Executive Director of NCVC, Mary Lou Leary denying my request.
I later learned that Ms. Leary was a former U.S. Attorney and Assistant Attorney General for the United States Department of Justice.

On August 17, 2009, I called the NCVC's Stalking Forum and told them I was having a problem with gang stalking in New York City.
The telephone Victim's Advocate was kind enough to respond that her name was Paula.
She was very knowledgeable about gang stalking, which she referred to as 'group stalking.'
She admitted that the management of the NCVC were aware of gang stalking.
When pressed for an anecdotal ballpark figure about the percentage of calls related to gang stalking, she reflectively became very vague.
She said in an Orwellian fashion that thousands of calls 'might' be coming in related to this to dozens of victim's advocates in her organization.
Ironically, this sounded more like an explanation of 'Heisenberg's Uncertainty Principle' than a straight answer.

As of June 2009, Mary Lou Leary had returned to the DOJ as Deputy Attorney General in the Office of Justice Programs.
This is the DOJ office that published "Stalking Victimization in the United States.' (Pub # NCJ 224527)
How can anyone believe that there is any independent victim's groups when they are all dependent on federal funds with Draconian conditions, such as the government controlling their internal records and external communications?
Is it not clear that the government controls these groups by placing their own 'shills' in charge to make sure that they are constructively government agencies?
How can someone go from a high position in DOJ to a public sector victim's rights group, and back to being in a high position in DOJ, without making the lack of independence of the public organization palpable?
Why aren't groups who receive the bulk of their finances from government just designated as government agencies and subjected to FOIA requests for their records?" 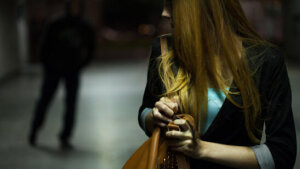