Is it true that 1 in 3 Britts have seen a ghost and more believe in Ghosts than God in the Uk?

I heard that on a documentary… just need you guys input….

It does not ring true partly for what it says, but also simply as highly incredible statistics.

To have gained a credible result a survey on beliefs like that would have needed to ask a very large number of Brit[i]on[/i]s of all backgrounds and locations in what is a very diverse country; and I doubt anyone has the will, time or resources to have done so.

So it would be interesting to know what the documentary was, and the sources it cited. I don't think even the Census asks in that detail although it does ask about general religious belief.

I don't doubt the existence of the belief, but what makes the claim odd is the supposed numbers holding it: a third of an entire country's population of many tens of millions? Really?

You might obtain a relative estimate of religious belief overall in the country by comparing mean attendances of places of worship of all faiths, with population; but over as much of the country as possible for any statistical merit. That though would not tell you what non-attendees think.

What you might have heard was a report about one of those cobbled-together "surveys" of a relatively few people, by some group, magazine or the like wanting to highlight some views of its own - a trick common among the advertising trade.

Or a sincere survey shamelessly mis-quoted by the newspapers to push a given view or simply by sheer ignorance.

Examples of either case are comprehensively dismantled by the Radio Four programme [i]More Or Less[/i]; which goes back to the the source to read what had really been found, or to establish if the "study" was at all genuine - which most of the glossy-magazine and advertising-agencies ones are not.
+ 1

Curiositeintrigueedunefille · F
@ArishMell I heard a documentary! Not a survey…not a report! I’ll try to find it again and give you the title…
+ 0 · Reply · Aug 11, 2022
Translate · Edited: 1 week ago

Curiositeintrigueedunefille · F
@ArishMell I know what I listened to thank you. Doesn’t mean you have to agree! 😏
+ 1

MartinII · 70-79, M
I doubt if any Brit, or anyone else for that matter, has actually seen a ghost, though plenty might think they have. As to believing in God, it depends partly on which God you have in mind. There are of course plenty of Muslims, all of whom presumably believe in God, plus for example some Hindus who apparently believe in lots of gods. Christianity is more difficult, since one sometimes wonders how many archbishops, bishops and priests of the Church of England believe in Him. But there are still plenty of Catholics and plenty of Protestant sects. 😊
+ 1

Rhode57 · 56-60, M
I believe that something created the universe etc who or what that was I am unsure but it didnt happen the way the bible said it did and it was written several 100 years after the so called birth of christ . There are no first hand accounts and no proof christ ever lived . I am a great believer in mother nature and nature as a whole and it upsets me greatly seeing what we are doing to this planet . We are our own worst enemy and the greatest threat to this planet as well .
+ 1

Curiositeintrigueedunefille · F
@BlueRain hHahaha I thought that was just a myth… LOL. I laughed so hard at this…
+ 0 · Reply · Aug 5, 2022
Translate

Rhode57 · 56-60, M
@Curiositeintrigueedunefille I will it first happened to me when I was in my early teens . It was an abandoned house down a little dirt road close to where we lived . A friend and I decided to go look around as we had heard stories about the house . We got as far as the gate and stopped dead . The lights in the house were on but no power ran to the house . We stood there dumbfounded and watched a shadow walk past the front window , scared the hell out of us and we took off .
The next day was talking to my dad and found out the males on my dads side had what I call a sixth sense . When my dad was just a boy , my grandfather , uncles and him saw the ghost of a vicar who lived in the house before them one evening . Its a long story . I have had a few experiences since . The latest was when I woke up from a coma in hospital about 7 years ago now and my dad came to see me . Hes been gone 20 odd years .
+ 2

ArishMell · 61-69, M
@Curiositeintrigueedunefille Not at the moment it doesn't..... worryingly so in fact. It's an exaggerated claim anyway, not helped by a very British preoccupation with the weather due to it normally being mild but very changeable over short times, rather than forming the long spells of extremes common in continental and sub-tropical regions.
+ 0 · Reply · Aug 11, 2022
Translate

Curiositeintrigueedunefille · F
@MrScribble Oh really? I must have blocked you… don’t know ya but I can be sure I’ve blocked you before. And for the record, I’ll ask what I want. Say good bye mate.
+ 0 · Reply · 4 days ago4 d
Translate · Edited: 4 days ago
4,134 people following
Ghosts Personal Stories, Advice, and Support 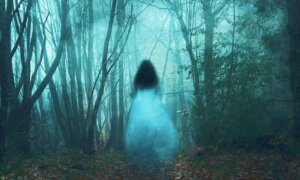