Remove Ads Get VIP
Home Groups People
The year was 1941. It was September. The Japanese soldiers were at The sout... | I Hate War | Similar Worlds
This post may contain Mildly Adult content.
I Hate War
Follow
Mildly Adult · Notifications: No Notifications · Newest First 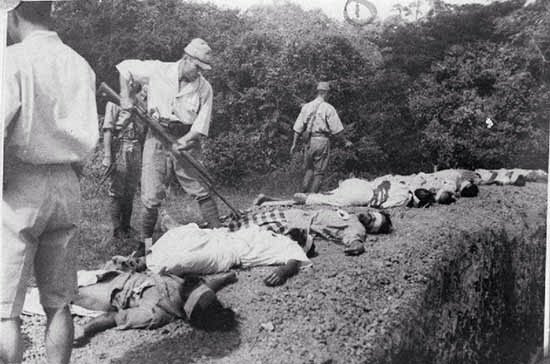 The year was 1941. It was September. The Japanese soldiers were at The southern tip of Malaya, preparing to invade. General Percival was the Commander of the British Commonwealth forces during the Malayan Campaign. My paternal grandmother was living in the kampong by the river and she was heavy with child. My grandfather was working in Malaya and was not home. The talk in the market was that that the Japanese would invade soon. Rice was scarce. People were hoarding food items.

Unbeknown to the British, the guns protecting the island were pointing the wrong way. When the Japanese rode their way through the thick Malayan forest and stationed themselves to attack, the British blew up the causeway to buy time. Undeterred, the Japanese crossed the river on their rubber dinghies. It was on such a night my father was born. My grandmother turned off the lights in the house. She gave birth in the dark of the night without anaesthesia. When the baby was born, she only had energy to wrap him in her blanket to muffle the crying. Then she passed out. She awoke in a pool of blood. The umbilical cord was still attached. She took a scissors, sterilized it on the tip of a candle flame and cut the cord herself. My father was born.

My first aunt who was in her early teens was married off to my uncle who came for her on a bicycle in the night. There was no dowry, no ceremony. All that my grandmother wanted was for her daughter to be safe in marriage as she had heard of Japanese soldiers taking and raping young unwed girls in those dark days.

Young men were rounded up and taken to the beach, lined up and shot. To make sure none survived, they were bayoneted. The bodies were then washed away.

This is one of the many stories told to me by my mother. And I know as my boy listens to it, he hears for himself the horrors of the times lived in our nation's collective history.

hunkalove · 61-69, M
One of the reasons why the British surrendered was because they heard the rumble of hundreds of tanks. Turned out to be thousands of Japanese soldiers on bicycles without tires, riding on the metal rims.
+ 2

hunkalove · 61-69, M
@novembermoon: I enjoyed your post, sad though it is. I father served in WWII, from New Guinea to Yokohama.
+ 1

novembermoon
We were, after all, only a colony. Not a priority at all for the Empire to protect. We learnt it the hard way, really.
+ 2

hunkalove · 61-69, M
@novembermoon: I don't think Asia was a priority for Britain, other than India and Australia, which weren't invaded. They had a lot on their hands with Hitler.
+ 1

Cierzo · M
Reading stories such as this, I realise how lucky I am to have lived in times of peace. The story about how your father was born is really heartbreaking. Those stories must not be forgotten, young people who have lived an easy life must realise the ordeals their ancestors had to go through.
+ 1

StefanoHopkins · 51-55, M
And, the young should learn about this and not succumb to being scared by warmongers so eager to make war on some other people.
In the movie "Patton", he is quoted as saying, "All glory is fleeting."
+ 1

Silentspectator · F
Life's situations makes us - beings, learn and do so much which otherwise we wouldn't have even thought of!