Home Groups People
If we are going to argue and get triggered online Shouldn't we do it O... | Life | Similar Worlds
Life
Follow
Fun
No Notifications
Only logged in members can reply and interact with the post.
Join Similar Worlds today »

If we are going to argue and get triggered online

Shouldn't we do it Over stuff people really care about? Instead of religion and politics, why not fight over the stuff that truly matters? Like: is it pronounced [i]Care-uh-mel[/i] or is it [i]Car-mall[/i]? Do you turn the toilet paper in or out? If you had to choose between vanilla and chocolate which is better?

There are much bigger and more important things to get mad and scream at your screens over. Come on people! Show some creativity! 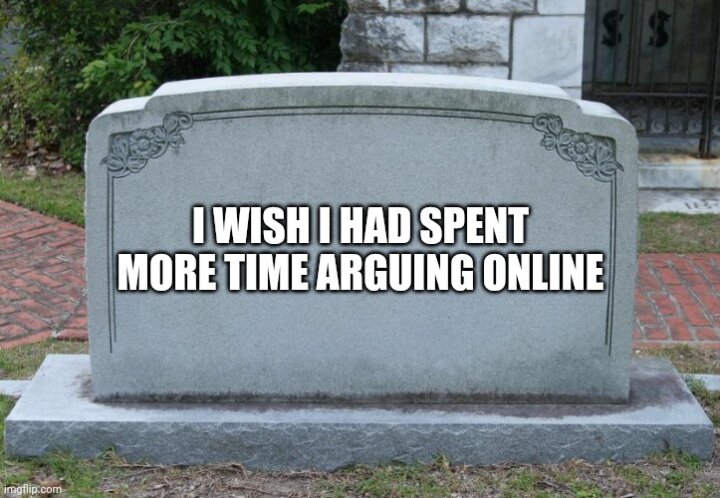 MrBrownstone · 41-45, M
Remember that time you argued with someone online and changed their mind?
+ 3

Backdoortothesublime · 41-45, M
[@573519,Valdaine] Show on ID last night about Subway Jared. He had all his minions put cameras in their preteen daughter's bedrooms so he could watch them and her friends

Now he's in prison getting the footlongs in a different orifice!
+ 3

checkoutanytime · 41-45, M
Yes, I agree. Sure people disagree, but navigate to an agreed out come is a natural way of life for a civilized society.
+ 1

Valdaine · M
[@1201531,checkoutanytime] or just bang your head on the keyboard until you can see their point of view
+ 1

Byron8by7 · M
Here in southeast Wisconsin, the device I had always known as a "drinking fountain," (also known as a "water cooler") is called a "bubbler."
+ 2

Brooshetta is the wrong way. (But most say this way)
+ 2

curiosi · 56-60, F
Someone once tried starting an argument with me over blue jays! I posted about how they were mean to the squirrels and someone just had to chew me a new one because blue jays are apparently nice birds!
+ 1

Lilymoon · F
apples and oranges.
And what's with the Easter decorations 🤣
+ 1