Home Groups People
Do you think this user was rude and a bully when she said this to me? Not t... | Community | Similar Worlds
Community
Follow
No Notifications
Only logged in members can reply and interact with the post.
Join Similar Worlds today »

Do you think this user was rude and a bully when she said this to me?

Not telling you her username. Got respect her privacy. When I can complained about my best friends yelling at me for screaming at them when I’m the one that asked for the truth and kept complaining about my mom leaving us.
This is what this mean girl said: 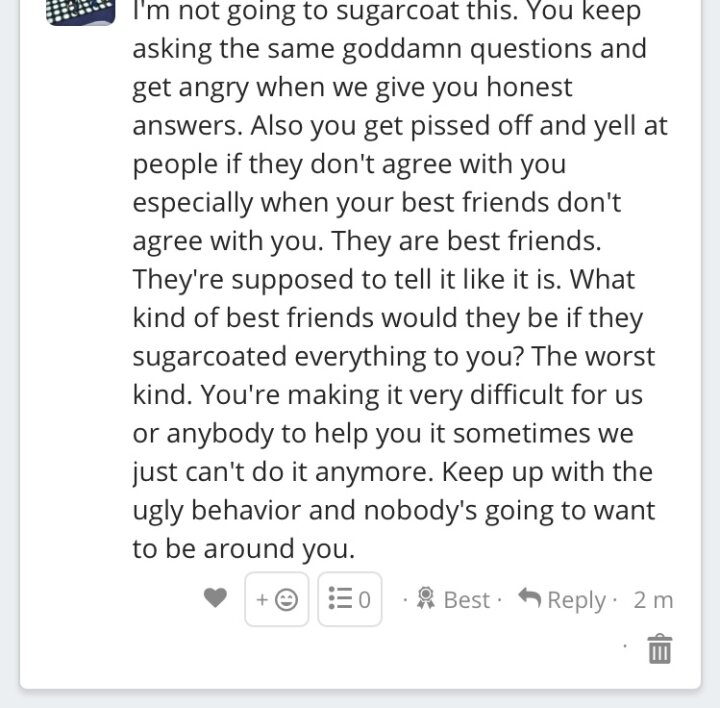 Eternity · 22-25, M
He is absolutely right and you need to stop obsessing over this. It's unhealthy.
+ 2

CereBellum
No. You just didn’t like what you read.
+ 3

Aquarius39 · 41-45, F
No she wasn't bullying you or trying to be rude. She just wanted to be honest with you, even though it may not be what you wanted to hear.
+ 1

Nephew ·
Sometimes the truth isn't what you'd prefer to hear at all.
+ 1

Pinkstarburst · 51-55, F
True friends are brutally honest...that’s what they are for and would expect you to be the same. Sometimes we need hear things we don’t like.

As for the ugly statement, she did t call YOU ugly...she called your behavior ugly. There’s a huge difference.
+ 1

lost213 · 41-45, M
She said your behavior was ugly. Not you. But she is right. And if you don’t want to hear the truth then don’t ask for it. Because a good friend will tell you the truth whether you like it or not. Even when your behavior is ugly.
+ 1

lost213 · 41-45, M
[@1132160,SweetiePieLay] I don’t think her intention was to be rude. But more so to emphasize the magnitude of your behavior so to use the word ugly would clearly show how she felt your behavior was towards her. Which to me sounds like she was just as upset as you were. Just food for thought.
+ 0 · Reply · Nov 25, 2020
21657 people following
Community Personal Stories, Advice, and Support