[quote] Omissions in intelligence, lackluster security planning and botched leadership failed to prevent the deadly attack on the U.S. Capitol in January, two Senate committees found Tuesday in what could very well be lawmakers’ last wholly bipartisan effort to probe the events of Jan. 6.

An attempt to establish an independent commission to investigate the attack in depth — including what precipitated it — was blocked by Senate Republicans last week. Though Senate Majority Leader Chuck Schumer has said he may reintroduce legislation forming a commission down the line, such attempts, even if successful, are still unlikely to garner enough Republican support to get off the ground.

Compiled over five months, Tuesday’s report is a joint effort from the Senate committees on Homeland Security and Rules. It zeroes in on just a few facets of the January 6 siege, namely the security planning at the Capitol on the day of the attack and how the breach could have been averted by “entities directly responsible for Capitol security,” like the U.S. Capitol Police and its board members including the House and Senate sergeants at arms and the architect of the Capitol.

The FBI, the Department of Homeland Security and the Department of Defense — all agencies tasked with communicating national security threats to U.S. Capitol Police — are singled out again and again across the report’s 95 pages.

It was, the senators found, a cumulative failure by those federal agencies to forgo issuing a threat warning or even a bulletin to law enforcement about what might lie ahead. And those omissions flew in the face of abundant indicators online that violence in Washington was actively being fomented if not imminent.

Multiple posts were made online — and were known to Capitol Police — containing information about the plot to invade the Capitol on the day that lawmakers would certify the 2020 election results showing that former President Donald Trump lost handily to his Democratic challenger . Some of those posts featured maps of the Capitol complex and its tunnel systems. Other social media posts, like those found on the message board known 8kun, were more plain.

“You can go to Washington on Jan. 6 and help storm the Capital. As many Patriots as can be. We will storm the government buildings, kill cops, kill security guards, kill federal employees and agents, and demand a recount,” one person wrote.

On TheDonald.win, a forum that has since gone defunct, another poster wrote: “If we occupy the Capitol building, there will be no vote.”

Tuesday’s report says the potential for unrest on Jan. 6 was known to the U.S. Capitol Police Intelligence and Interagency Coordination Division for weeks ahead. Indeed the Electoral College had declared Joe Biden to be America’s next president a full month earlier based on his 306 electoral votes to Trump’s 232.[/quote]

SteelHands · 61-69, M
The majority of the Democrat party cast doubt on elections for 20 years and now they hope to cast doubt on its citizenry.

What can you do if one side stubbornly refuses to co-operate ?
Despite the possible implications with regard to 'known potential terrorist threats' ?
+ 2

Suppose those who took part had been armed ??

America has so many more levels of local; state and national security than any other country on earth and NONE Of them acted on what you and I were watching on television !

Crazywaterspring · 56-60, M
[@448576,Picklebobble2] It's not surprising that law enforcement is complicit regarding sedition from conservatives.
+ 0 · Reply · Jun 8, 2021
This message was deleted by its author.

Ynotisay · M
Without anything to go on other than what I've read, which doesn't speak directly to it, I'm becoming more convinced that this was an "inside" job. Hate to say it but...
+ 3

Ynotisay · M
[@373017,autumn25] Yep. And it appears some on the "inside" may be have been communicating with some on the "outside."
For the "Law and Order" types, who cry with joy over their love of our great country, to turn their backs on such a blatant action seems to go beyond the typical hypocrisy in to cover-up territory for me.
+ 0 · Reply · Jun 8, 2021

MotherHubbard · 56-60, F
Investigate how we got this armed and dangerous right wing? It's public knowledge that every institution, cops, Congress, the Senate and House, the FBI, and the Texas Border Patrol but especially the corporate media was used to help facilitate the mob and the events of January 6.
+ 1

MistyCee
I wouldn't hold your breath for a bipartisan commission. I haven't read the whole thing, but it looks like they did plenty of finger pointing on security and left the tougher politically charged stuff about coordination to make it happen with the upper level of the Executive Branch out.


I'd like to be wrong, but I don't think this Congress can do much more without a circus, which wouldn't get us anywhere and would only make doing business even more impossible then it already is.

McConnell is the guy to watch, but I don't see where he has anything politically to gain by it and a lot to lose.
+ 2 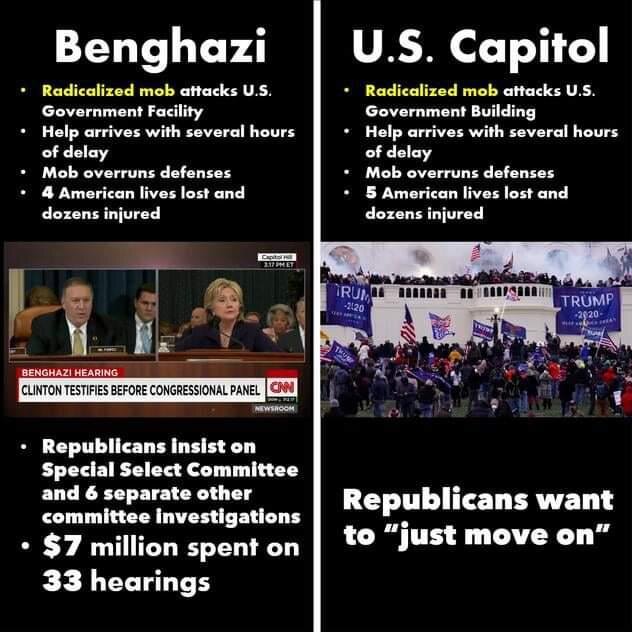 Spotpot · 41-45, M
I bet the republican are atleast indirect complicit to the storming of the capitolium definetly congress republicans.
+ 1

SteelHands · 61-69, M
The press tried warning the farside wing and conserv inc. That nobody in free societies storm bastiles and the American public wasn't going to buy a false flag op like that.

But Schumer and Pelosi are still convinced that the very people who they represent are brain dead morons.

Heh even a dumb buyable reporter would have known better than try some shit like that.