Home Groups People
(25) states in the process of voter reform laws including required voter I.... | Politics | Similar Worlds
Politics
Follow
News
No Notifications
Only logged in members can reply and interact with the post.
Join Similar Worlds today »

(25) states in the process of voter reform laws including required voter I.D. for all votes. (471) bills under review.

Jwalker
The Republicans would never win again if they didn't suppress the vote. Some have said exactly that. A fair democratic voting system would wipe them out because the people like democratic policies far more.
76% of Americans liked Joe Biden's stimulus plan. Every Republican in Senate voted against it.
+ 4

Jwalker
[@6853,Confined] There is absolutely no proof. The Trump lawyers did not, would not bring any proof into court and you call me a sheep.
Why do you think they are recounting in Maricopa County for the 3rd or 4th time? The other recounts proved there was no fraud. Do you think they will prove fraud and bring their findings to court or is this whole shitshow just for the benefit of gullible people like you. Cyber Nazis can say they found fraud, never prove it but you will believe. It's to easy. This is exactly why Trump said he Loves the poorly educated. The recount is just one more grift. They did a recount instead of a rally this time.
+ 1

MarineBob · 56-60, M
When our voter ID law was challenged the lawyers couldn't find anyone without a ID to testify
+ 2

windinhishair · 61-69, M
Voter suppression is needed to keep minority rule in place for as long as possible by preventing likely Democratic voters from voting. Republicans will continue to cheat, because they can no longer win fair elections, as last year's presidential election showed.
+ 2

LadyBronte · 56-60, F
You have to have an ID for absolutely everything else. Voting should be no different. Period.
+ 5

windinhishair · 61-69, M
[@9537,LadyBronte] That isn't true everywhere. Many people don't have cars and live in areas without public transportation. When Alabama heard the Supreme Court results striking down parts of the Civil Rights Act, they immediately implemented voter ID AND reduced the number of locations and hours where you could obtain one. The intent was and is clear. And the reasoning is transparent--Republicans can't win fair elections in many areas any more, so voter suppression will "solve" that for them for a decade or two.

Just give everyone an ID. Simple. That's a laughable excuse that people could print them out on their computers. If so, why couldn't they do it now? Use the same level of security that exists now, just let every adult have one. You do agree all adults should be able to vote, don't you?
+ 2

Jwalker
Fox News:
@FoxNews daytime ratings have completely collapsed. Weekend daytime even WORSE. Very sad to watch this happen, but they forgot what made them successful, what got them there. They forgot the Golden Goose. The biggest difference between the 2016 Election, and 2020, was @FoxNews!
— Donald J. Trump (@realDonaldTrump) November 12, 2020
+ 0 · Reply · May 1, 2021

PicturesOfABetterTomorrow · 36-40, M
Ah yes, the greatest excuse to suppress the vote. The GOP can't win an election any other way. The math proves that.
+ 1 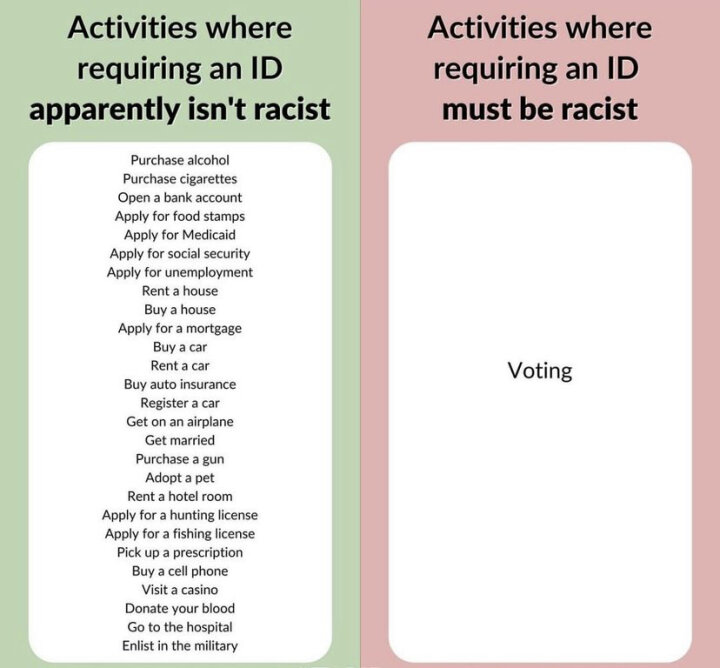 PicturesOfABetterTomorrow · 36-40, M
[@1201621,MotherHubbard] Any other possibility would require self reflection which is a non starter with these folks.
+ 1