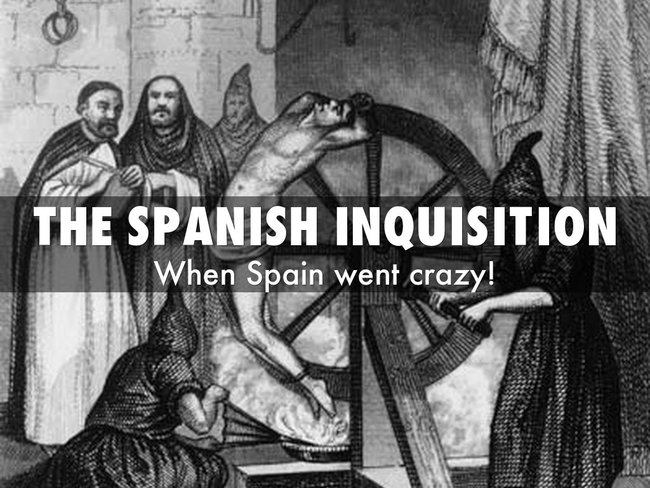 I’ve noticed that many people, especially those who want to attack the Catholic Church, always bring up The Inquisition as an example of the Church’s barbarity. There are two things wrong with this way of thinking: First, The Inquisition happened five hundred years ago, not last week; and second, it was not started by “The Catholic Church.”
The Inquisition was the bright idea of Queen Isabella of Spain (Yes, the Christopher Columbus lady). What happened was this. When Isabella was a girl she had a private confessor, Tomàs de Torquemada, to whom she confessed her sins on a regular basis. Now Torquemada had this thing about heretics, and he made Isabella promise that when she became queen she would do something about the number of heretics who were spreading false teachings in her kingdom. She agreed, and after she was crowned she and her husband, King Ferdinand, made good on her promise and appointed Torquemada, a Dominican prior, to the imaginative post of “Inquisitor General." She also wrote to Pope Sixtus IV to tell him that Spain was becoming overrun by spreaders of false teachings.
“Okay,” said the Pope. “I’ll send some guys.”
“No need,” Isabella wrote back. “I already have a guy.”
The Pope replied, “Then do what you have to do.”
Now Pope Sixtus did not realize that by his sanction he was turning Torquemada loose like a kid in a candy shop. With the help of other Dominicans, Torquemada drew up some guidelines for dealing with those he suspected of heresy. But he went further than that, and added to the list the crimes of blasphemy, apostasy, homosexuality, and any disloyalty to the Church.
Isabella gave Torquemada use of her torture chambers, because at the time torturing a confession out of someone was a common practice. The torture chambers were run by secular authorities—again, not “The Catholic Church”—with Dominicans asking the questions. After the victims "confessed" they were condemned by the secular courts in the employ of Queen Isabella.
Some heresies were discovered, but then the inquisitors went a bit nuts, to put it mildly. The same thing happened during the French Revolution, when anyone who even smelled like an aristocratic sympathizer was beheaded. People were leaving Spain in droves, especially Jews and Muslims, who also became targets.
Finally, the new Pope, Alexander VI, heard enough complaints from refugees and wrote to Torquemada, saying in effect, “Okay, that’s enough. You’re getting out of hand.”
Torquemada messaged back, saying in effect, “Hey, forget you, Pope. We’re on a roll here.”
To which Alexander replied, “Don’t make me come down there!”
As it was, the Pope did send some guys to stop Torquemada from his rampage, and forced him into retirement at his priory, where he died in 1494.
But The Inquisition was still on the books in Spain until 1830, when it was officially removed. Fittingly, some very angry people, thought to be descendants of Torquemada’s victims, dug him up and burned his bones on the same spot where he had executed so many people, many of whom were innocent of any crime except perhaps guilt by association.
So that’s the story. The Inquisition was not, as Mel Brooks says in the song, “A mission/ To convert the Jews.” It was basically the brainchild of an ill-advised queen, and sanctioned by a pope who did not realize the can of worms his approval would open.

BadPam · 61-69, F
@Heartlander: No, I was paddled by the principal of my public high school. It was done completely in private and under strict guidelines, as opposed to what the nuns did in Catholic grade school.
+ 0 · Reply · Dec 28, 2016

BadPam · 61-69, F
@Heartlander: Well as I say, I went to catholic grammar school, and if nothing else the nuns (Franciscans) were very good at teaching grammar and usage. But I went to public high school because my Mom could not afford to further my Catholic education. In college I majored in Linguistics.
+ 0 · Reply · Dec 29, 2016
This message was deleted by its author.
View 4 more replies »
This message was deleted by its author.

BadPam · 61-69, F
@grandaddypurple: No, in fact I'm pretty well educated. I don't want to argue, just to present a historic view of the Inquisition bereft of rumor and misinformation.
I'm also very curious to know who all these missionaries were who killed the Indians. I know they didn't kill any Mohawks.
+ 0 · Reply · Oct 19, 2016

BadPam · 61-69, F
Well it's modernized dialogue to the effect of what was really said or written. But it was the basic idea anyway.
+ 1

BadPam · 61-69, F
@DuchessOfMapleSyrup: Yeah, I like to keep it lighthearted, even though it was pretty serious stuff.
+ 1

SW User
Yeah the Catholic church has really REALLY nothing to do with the inquisition, it's lies, lies and nothing but lies to blame those poor Church leaders and Catholicism in general 😂😂😂
+ 2

canadarm · M
Nothing wrong with being a member of any organisation you wish, as long as you or the Org aren't harming anyone ( or yourself), and you understand that only members are subject to the Org's rules; not the general public.

What we are seeing in the Country/area where I reside, is that the Catholic Church is at the vanguard of an ever-increasing number of churches of various denominations which are being exposed for systematic and longstanding child abuse, pedophelia, homosexuality which contravenes their own rules, and covering the trail of evidence to avoid prosecution.

This is causing a general feeling of revulsion and fear in the population; and people are leaving the churches in order to avoid exposing themselves and their children to this danger, and fear of being associated with such practises.
+ 1

dunpender · 80-89, M
The Inquisition or Holy Office was not a solely Spanish thing, it existed throughout catholicism, The firest of Smito field in London, the Burning of Catharsis in Southern France, Joan of Arctic. The Holy Office still exists by the way, no longer able to set fire to people though. LEONARDO DA vinca lived in fear of the Holy Office.
+ 2

karinaal · 70-79, F
There have been several inquisitions. Some have been Spanish and some not but I guess that the one you are writing about is the one that Pope Sixtus in 1478 permitted Queen Isabella to initiate - it is the famous one.
I agree that to blame the Roman Catholic Church for it is wrong. At the time people in general and no matter their religious confession believed in witches being the Devil's helpers and causing all sorts of big and small accidents and disasters - it was not an invention by the Catholic Church.
In 1478 when the Pope approved of Queen Isabella's plan to start the inquisition the Roman Catholic Church was still not a church but the church in most of Europe. This change dramatically and at least from 1534 most of North-Europe had become Lutheran but the witch hunt continued also in the now Lutheran countries and often encouraged strongly by the Lutheran churches.
In my own country (Denmark) the witch hunt was at the highest in the mid of the 17th century, years after 1536, when the country officially converted to the Lutheran teaching. The last person was convicted as witch in 1693 - 157 after the Catholic had been abolished.
+ 0 · Reply · Oct 19, 2016
Edited: 4 yrs ago
View 2 more replies »
This message was deleted by its author.

karinaal · 70-79, F
People have believed it witches already long before anybody heard of Christianity so blaming the Roman Catholic Church for this - in a way natural - belief in witches and a supernatural evil is wrong.
Also in the Roman Empire people were tried and convicted as witches and the belief in witches is also known in Muslim countries. It also but in a different form is known even in the Inuit culture.
Instead of using witch hunts in the future to start a new witch hunt on the Roman Catholic Church or Christians in general it is better to understand that when people believe(d) in witches causing the evil that happened then it was out of fear and of a natural urge to try to explain why evil happened. Humanity was in some ways more ignorant then than it is now and even today there are educated people who believe in the strangest kinds of unnatural things.
+ 0 · Reply · Oct 19, 2016
This message was deleted by its author.

dunpender · 80-89, M
By the way protestants were not averse to setting fire to catholics either
+ 1

dunpender · 80-89, M
Yes I know my European history. In Scotland Catholics and Protestants happily set fire to each other.
+ 1

karinaal · 70-79, F
Now I probably make the biggest and most powerful nation in the world angry but I have to say this; It is a problem that so many Americans do not seem to realise that European history also is their history.
+ 1

BadPam · 61-69, F
True, when you see the persecution of Catholics under Henry VIII, Queen Elizabeth, and Oliver Cromwell. Then of course we have the St. Bartholomew Massacre, where French Huguenot Protestants were lynched by the Catholics. It went back and forth. Sort of like Sunni and Shi'ites killing each other because each side thinks the other side is wrong.
+ 2

BadPam · 61-69, F
@snowontheroof: Oh yes! Shakespeare knew which side of the bread he put his butter. That's why he disparaged Richard III for being a Plantagenet, and built up the Tudors, who had dethroned him.
+ 1

TheCapedCrusader007 · 31-35, M
There is a need of inquisition after what the Muslim world is conspiring against Catholics. The " politically correct" cowards are just making matters worst.
+ 0 · Reply · Dec 21, 2016
View 2 more replies »

BadPam · 61-69, F
@TheCapedCrusader007: Well America is made up of a mixture of cultures. The problem is that many people are prejudiced against different cultures. We are trying to teach tolerance, but you can't convince some people.
+ 0 · Reply · Dec 21, 2016
1-11 of 11
60 people following
I Am Roman Catholic Personal Stories, Advice, and Support