Ruler of the galactic empire, lord of the dark side, and virtuous free-speech champion; Emperor Palpatine was left in shock today and he found his Twitter account permanently banned. "The First Amendment is under assault!" he hissed. "Just because I ordered the Death Star to blow up that planet and massacre 3 billion people, does not mean that my speech should be restricted. If people got down that road, it could end up creating a dictatorship where nobody has any rights!"

When it was pointed out to the haggard albino overlord that he was in fact, the actual ruler of a vast and brutal dictatorship, Palpatine merely said that our publication was fake news. He then issued us with a cease a desist letter and told his followers that he was going to put our entire editorial team in jail.

Enraged by the injustice of the Twitter restriction, Palpatine's followers took to the internet. Middle-class and middle-aged white Conservative American men (well known to be the most oppressed group in the history of the universe) manned up to share their heartfelt grievances. "I never said that Wooki lives don't matter," opined Budjack, a staunch Palpatine supporter. "It's just that my life matters too and all these people saying that Wooki lives matter are clearly being racist! Just because I called them big hairy ape monsters on my other profile does not mean I should have to be responsible for my views."

"Political correctness has gone too far," bawled another member of the intellectual dark side web. "An ordinary white man like Palpatine can't even commit giga-genocide without these social justice NAZIs mildly criticising him a bit and stopping him from using a website! None of these idiots have even read the First Amendment," he said.

Later on, a surprising survey emerged which showed that 66% of Palpatine supporters now blame Ewoktifa for the destruction of the planet Alderaan, in spite of there being no evidence of this and in spite of them all supporting the annihilation of the said planet when the story first broke. 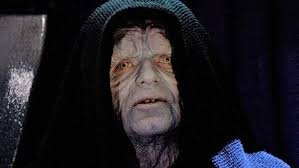 [i]A picture of Palpatine, putting a brave face on this latest injustice.[/i]

Asificair · M
He'll be president one day, Dark Lady Sith Marjorie Taylor Greene at his side. 🙄
+ 2

spjennifer · 56-60, T
Awesome parody of what's really happening! Excepting you should have called him Paltateenypeen!
+ 1

SW User
I don't know if this is fake news or a parody of Trump.
+ 1

Burnley123 · 36-40, M
[@621893,whowasthatmaskedman] Trump gets a lot of support and some from non-crazy people. I think satire is more powerful than polemic sometimes.
+ 1