Did you know most teens have their first sexual experience at home?

[quote][b]Most Teens First Had Sex at Home[/b]
[/quote]
WASHINGTON – Parents wondering if their teenagers are having sex might look upstairs or down the hall. New research finds most sexually active teens first had sex in their parents' homes, typically late at night.

The findings, being released Thursday, should dispel myths that teens are most often having sex after school, when parents are still at work, researchers said. The message for parents, experts say, is nothing new: Be aware of what your kids are up to.

``Kids no longer need to drive to lookout point to have sex,'' said Sarah Brown, director of the National Campaign to Prevent Teen Pregnancy. ``The data suggest the adults may be in the house.''

By the time students are in the ninth grade, 34 percent have had sexual intercourse. That rises to 60 percent by 12th grade.

The report, by researchers at Child Trends, is based on a national teen survey that has been tracking about 8,000 teens since 1997. The ages of the teens ranged from 12-16 when the survey began, and researchers have interviewed the same group every year since then. This report looks specifically at the 664 teens who reported having sex for the first time between 1999 and 2000.

Of those surveyed in 2000, 56 percent said they first had sex at their family's home or at the home of their partner's family.

Another 12 percent had their first sex at a friend's house; 9 percent at a teen's own home; 4 percent in a truck or car; 3 percent at a park or other outdoor place and 3 percent at a hotel or motel. Ten percent said someplace else.

The findings reinforce earlier research that parents can have a significant impact on their children's decisions about sex, Brown said.

``This notion that it's impossible to supervise kids is ludicrous if a lot of them are having sex in the rec room,'' she said.

Earlier this month, researchers reported that teen girls who are close to their moms are more likely to stay virgins. That report, by researchers at the University of Minnesota, also found that half of mothers of sexually active teens didn't realize their children were having sex. Further, while the vast majority of mothers strongly disapprove of their teenager's having sex, large numbers of teens don't realize how their moms feel.

``Parents need to know where their children are and what they're doing,'' Brown said. ``This is not a new idea.''

As for timing, Thursday's report found 42 percent of teens said their first sexual encounter was at night, between 10 p.m. and 7 a.m. Another 28 percent said it was in the evening, between 6-10 p.m.

Just 15 percent said it was in the late afternoon, between 3-6 p.m.

That cuts against the conventional wisdom among parents and policy makers alike that teens are more ``at risk'' of sex after school, said Jennifer Manlove, a researcher at Child Trends.

Research has shown that teens are more likely to commit crime during the after-school hours, Brown said. But people have wrongly assumed that the same goes for sex, she said.

The National Longitudinal Survey of Youth did not look at whether teens were having sex on weeknights or weekends. And it did not ask if parents were home at the time. Although the survey has been interviewing teens since 1997, this was the first year the questions about where and when teens first had sex were asked.

FrogManSometimesLooksBothWays · M
@DragonFruit You were 18 I hope.
+ 1

FrogManSometimesLooksBothWays · M
@DragonFruit Good. I was 19. It was her dorm room.
+ 1 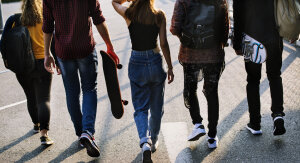