what’s your opinion? [I Like To Expose My Buttcrack]

so i’m a guy that loves to show my buttcrack and sometimes even wear a thong but i feel restricted to only wearing skinny jeans or sweatpants to show because leggings would be too obvious and i don’t know how people would feel seeing a male wear leggings in public. what’s your opinion on what i should wear? i’m not gay but i do find that wearing girl clothing is fun sometimes like wearing a thong or leggings ( i have in my own house) but my friend emma says i should just get a wig so i can fully dress like a girl and it wont be obvious that im a guy

swirlie · 31-35, F
[c=008099]
I've only seen one guy wearing leggings in public, but wore them as part of his daily running attire with loose-fitting gym shorts pulled on overtop of the leggings. As long as a male or female is actively running, or appear about to start running as an exercise routine, then both genders can get away with wearing almost anything they please.

But as soon as they stop running... or they appear to be just walking down the street shopping, suddenly their personal dress code can look hideously ridiculous to a passive observer.

If you want to show "buttcrack", I would strongly recommend loose fitting jeans... but not tight-fitting skinny jeans or you'll look gay. Nothing wrong with looking gay as long as you're not straight, otherwise you'll convey a contradiction of perception about yourself to the general public.

For example, if I want to bring attention to my very flat toned belly while wearing a short-shirt, I will always wear loose fitting jeans, not tight jeans. The looseness of the denim waistband really highlights the flatness of my athletic stomach. But if I wear tight jeans, my stomach simply disappears behind the denim. Hope this helps![/c]
+ 0 · Reply · Jul 20, 2021
View 4 more replies »

swirlie · 31-35, F
[@541473,caniusethis5]
@swirlie Interesting response. Do you enjoying seeing a guys buttcrack? If you see a guy in super skinny jeans which you think looks gay do find that a turn off?
[c=008099]
I don't personally like to see a guy's buttcrack at anytime, but neither do I like to see a woman's buttcrack even occasionally! In my opinion, there is nothing alluring or even remotely attractive to either.

If I see a guy in super-skinny jeans of which I think of as the unofficial uniform for the 'gay', I do not find that 'look' to be a turn-off but I do think that 'look' would be more attractive on a younger female body than on a male's body, be he gay or straight. [/c]
+ 0 · Reply · 4 days ago4 d

caniusethis5
[@332402,swirlie] Thank you for your honesty. I appreciate it. Often people are judgemental about it when they do not like it.
+ 0 · Reply · 4 days ago4 d

swirlie · 31-35, F
[@541473,caniusethis5]
[c=008099]
But having said that and not being lesbian myself, let me add this to my perception from a heterosexual's perspective as she attempts to relate to a gay male's perspective.

If I see a male who is wearing super-tight, form-fitting jeans I make no personal judgement toward him as a person, other than acknowledging in my mind that he is merely making a fashion statement to whomever his intent is directed to, to whomever wants to be the recipient of that fashion statement for whom it may have been intended, neither of which is any of my business.

But I would much rather see a guy wearing super-tight, form-fitting jeans than wearing a uniform intended by design to be a woman's uniform which of course are leggings, be she straight or lesbian it matters not.

Leggings are a woman's uniform, not a male's. If a male insists on wearing women's leggings while in public, then have the good sense to wear a pair of gym shorts overtop of them to respect that fashion distinction, rather than pretend that leggings all by themselves were designed to be part of the 'unisex' collection that jeans have evolved into but which leggings have not. 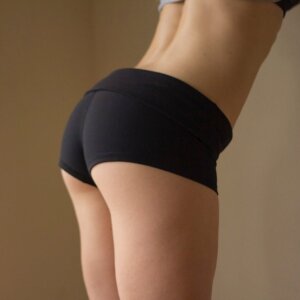